Gadabout Vintage at 1300 Queen St E is owned and operated by Victoria Dinnick, who gave Dumpdiggers a walking tour of her famous antiques store on 19th January 2013. 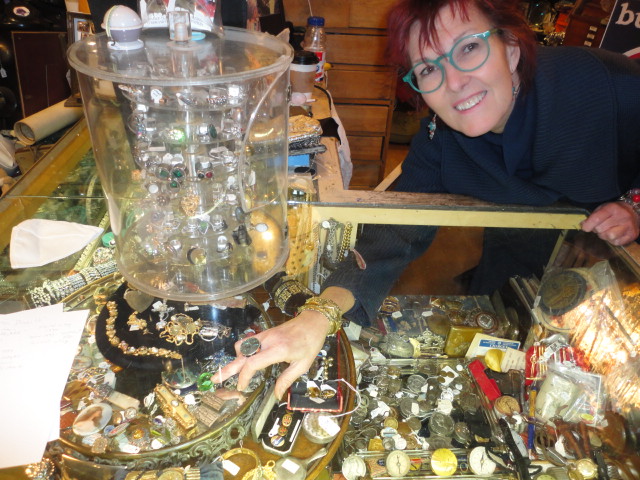 Most Toronto antique collectors probably already know Gadabout, and have met its owner. That's because Victoria Dinnick makes herself known wherever she goes - she's a powerful smart lady with a dry sense of humour that leans toward sarcasm.  Victoria is a familiar face in the crowd at auctions and estate sales all over Ontario and Quebec. She regularly participates in the seasonal shows of several antiques and collectibles subcultures including The Old Paper Show, and The Old Clothing Show. 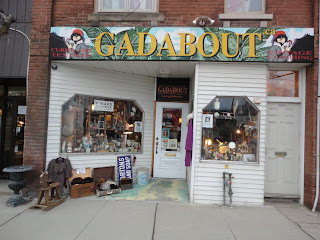 Victoria was a fixture at Harbourfront Antique Mall in the 1990s and still has regular customers that seek her out at sales and make frequent visits to her 1300 Queen St E address. There are some pickers from whom she still buys merchandise, and veteran collectors to whom she sells stuff.  Anyone can email the store Info @ GadaboutVintage. com

Victoria Dinnick started collecting antiques in the 1980s and by the early 90s she was selling her merchandise at Harbourfront Antique Mall, which, if you don't know was a giant two story antiques superstore here in Toronto - it had twenty or more independent dealers under one roof and was located near the base of Spadina at Queens Quay, right on the lake shore near what was once Ree's Wharf ... 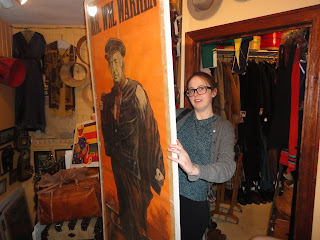 Victoria escaped Harbourfront and opened Gadabout, her first antiques and collectibles store in 1997, in the Mirvish Village on Markham and Bloor. She moved to 1300 Queen St East in 1999 and was instrumental in the gentrification of this area which now boast several antique furniture stores, funky cafes, used clothing stores and specialty coffee shops.

Victoria told me there are over 100,000 individually priced antiques and collectibles inside Gadabout - the building is packed full of old stuff for sale, and the prices are

A curious helper holds a larger then life sized poster of a man frozen in the unmistakable action of putting on his coat.  This young helper with a boy's name watched me walk about the rows of shoes and bags and past racks of coats and reminded me once that all the clothes for sale in Gadabout have been previously dry cleaned. 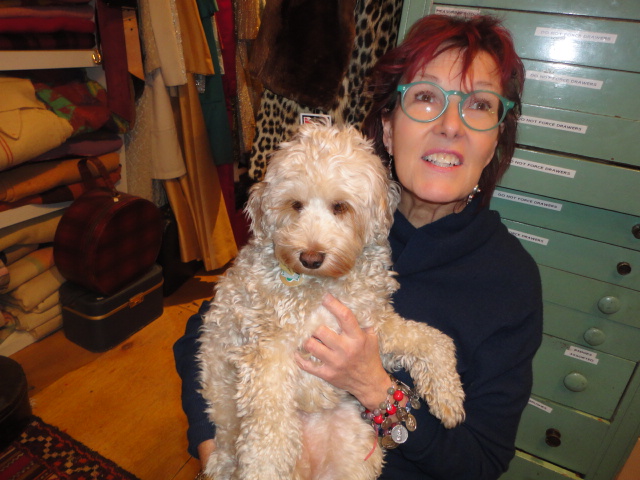 Victoria Dinnick and her dog ...


Gadabout medicine cabinet shelf has lots of turn-of-the-century patent medicine quackery and many dozen old remedies including morphine pills and other opiates, and lots of bizarre wild concoctions. At a glance I spotted the blue coffin poison which is an item that I know and more importantly I know approx what it's worth and can use it as a handy measure by which to gauge Gadabout prices. 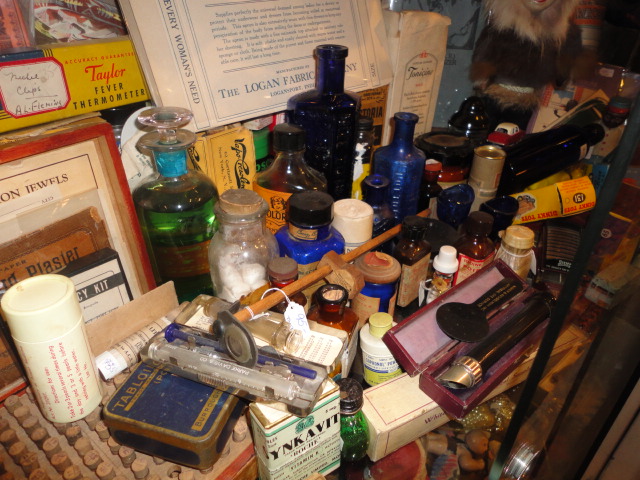 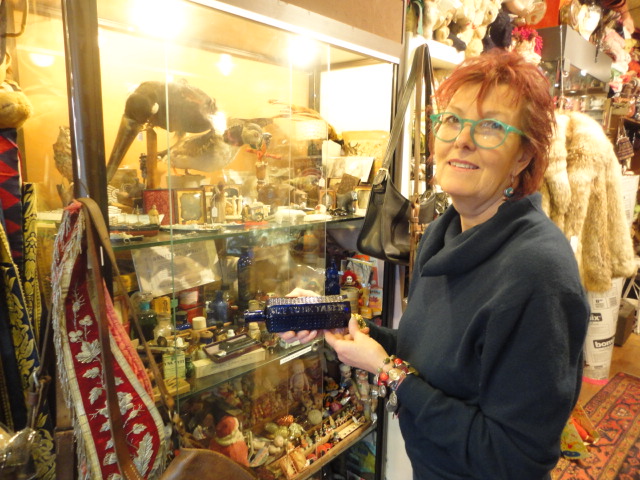 Victoria stunned me by only asking $99 for this gorgeous large UK cobalt blue coffin poison! 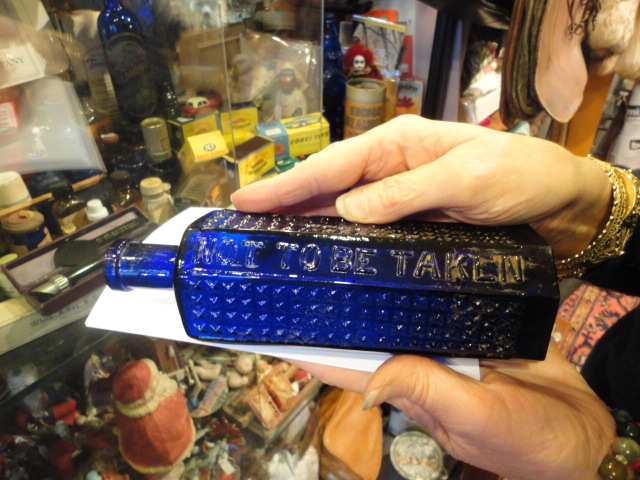 Here is liquid dextrose, a sugary syrup for intravenous feeding in hospitals. 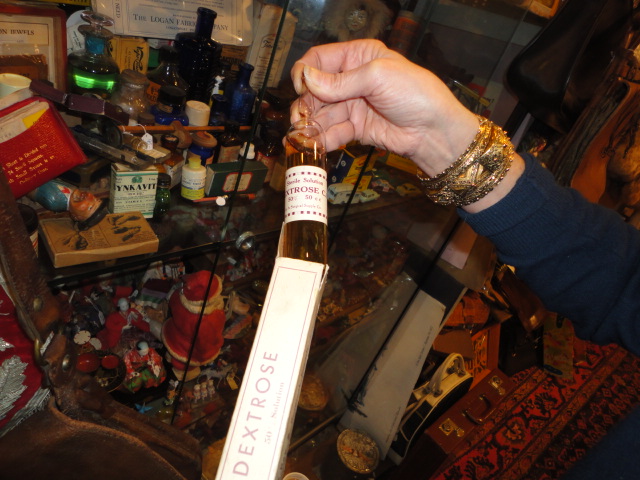 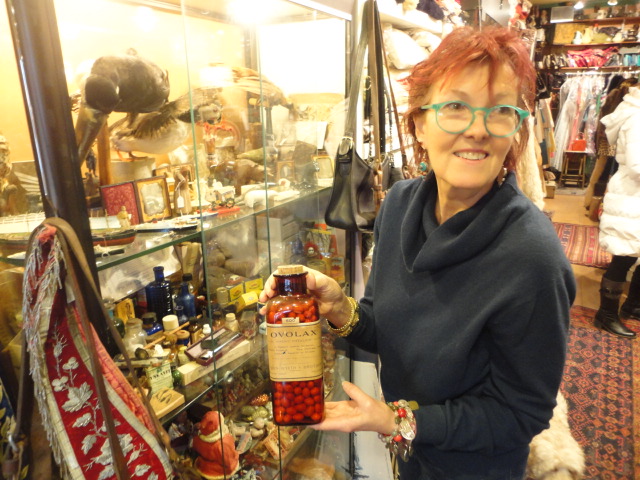 Lots of the medicines in the cabinet are full of their original contents. Here is Ovolax which is a healthy laxative prepared by John Wyeth & Brother from Chicago. These guys went on to found a huge drug company - see here for more on Wyeth Co 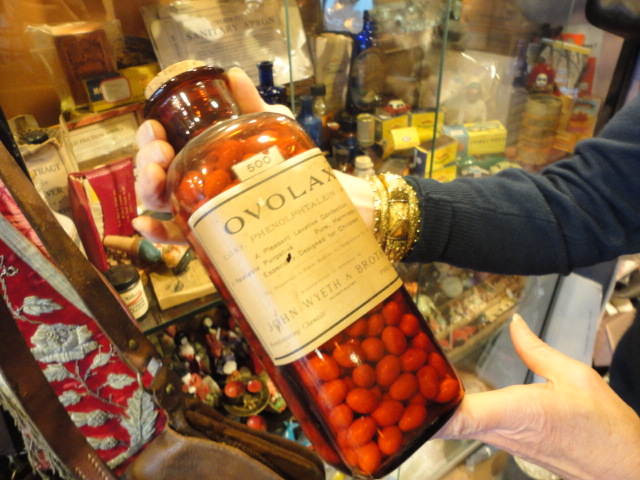 From Germany, here is a cardboard container filled with 100 Red Pearls whcih were taken as a remedy against anxiety and nerves. Yes the red pearls are filled with opiates and this little package is sure to be worth a small fortune today, but Victoria is asking only $35 for the item. * She could triple that on eBay I reckon. 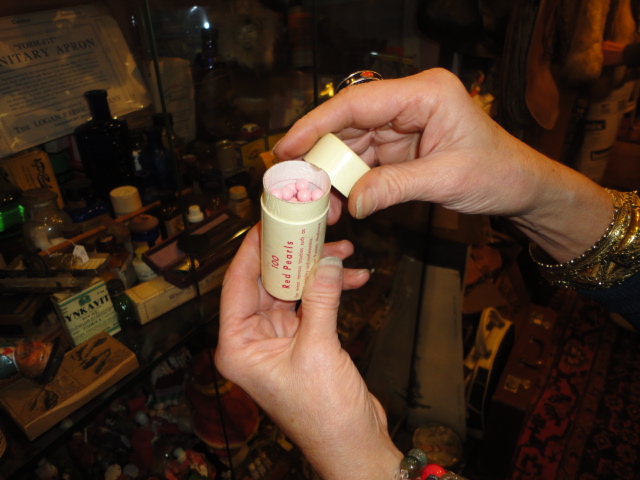 The show continued and got even better when she found a bright red wallet that contained medicated gelatin 'lamels' which are strips of morphine infused cloth that act as a local anesthetic? I suppose. This is military grade pain killer for front line soldiers in WW1. The writing is as follows,  MEDICATED GELATINE LAMELS. SAVORY & MOORE, LTD, LONDON / EACH SHEET IS DIVIDED INTO 24 SMALL SQUARES. EACH SMALL SQUARE IS AN ORDINARY DOSE 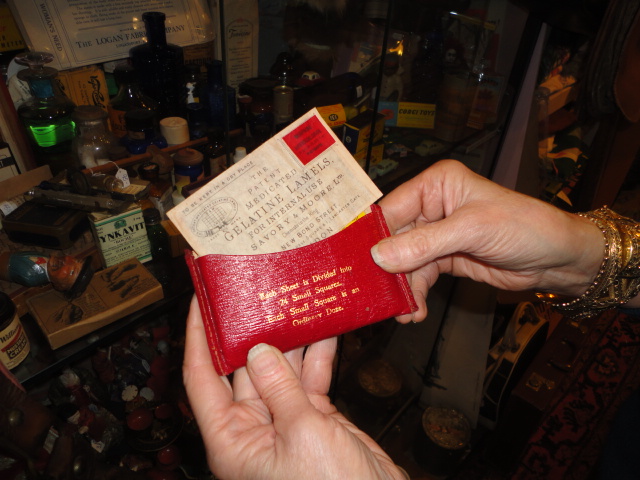 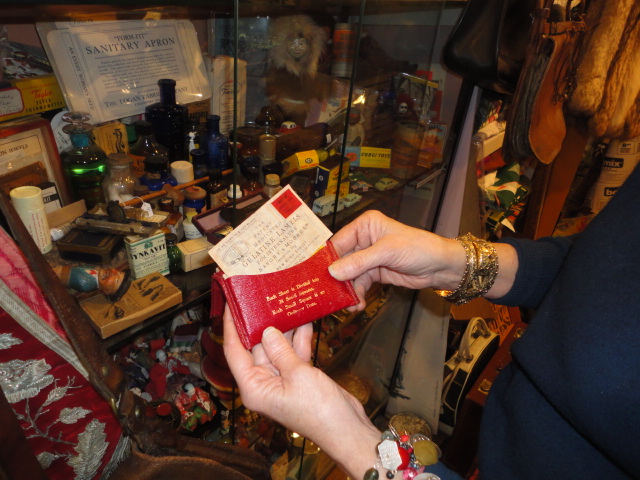 Look inside and you can see what's left of the strips. 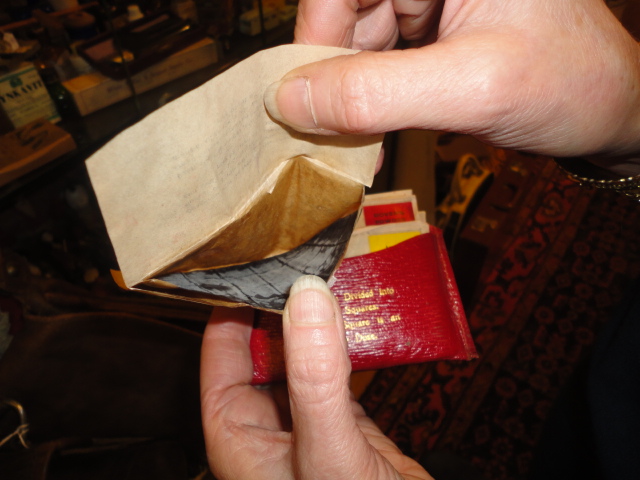 Finally Victoria is very eager to promote her latest discovery - a 1929 Map of Toronto !

Although faint with age, the map is good condition has been professionally restored - its linen backed and has been recently cleaned and repaired. 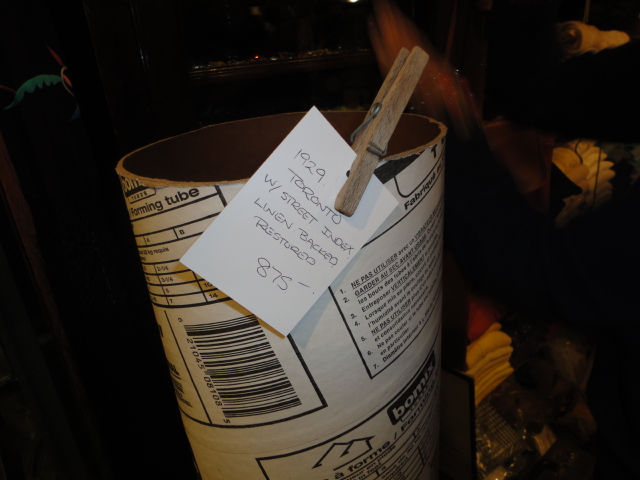 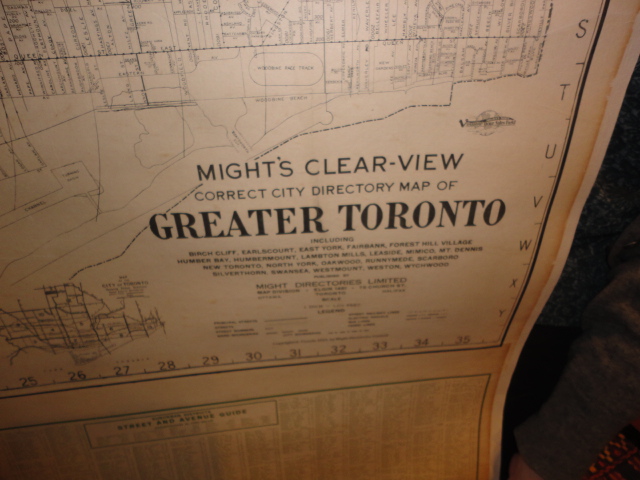 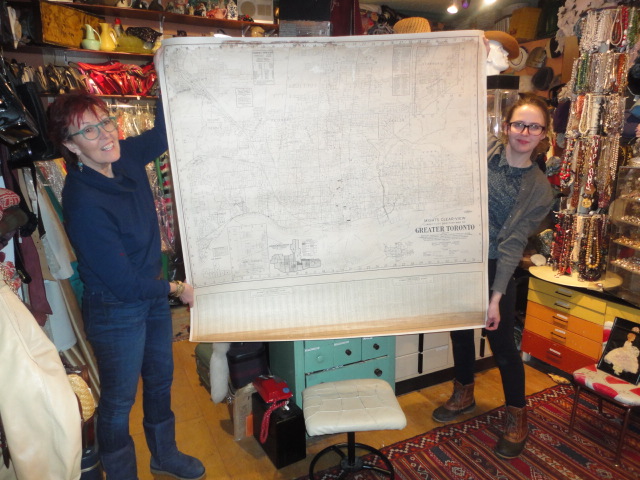 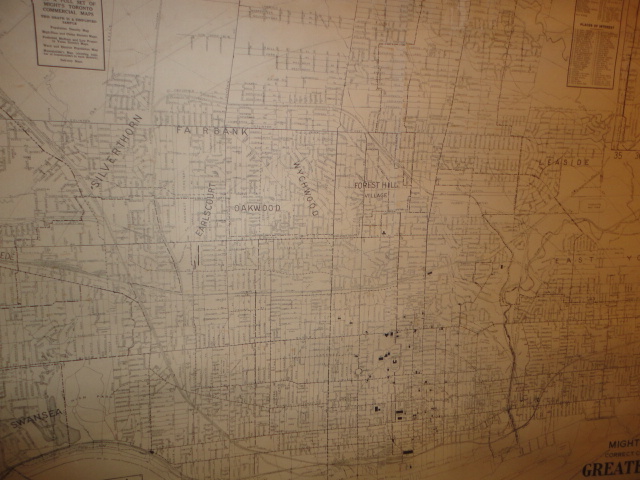 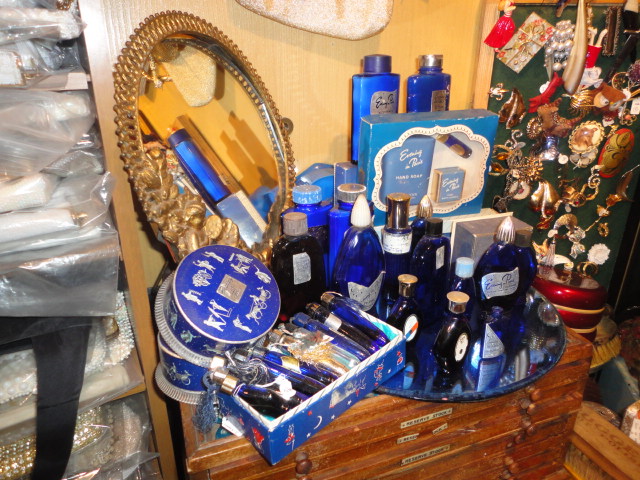 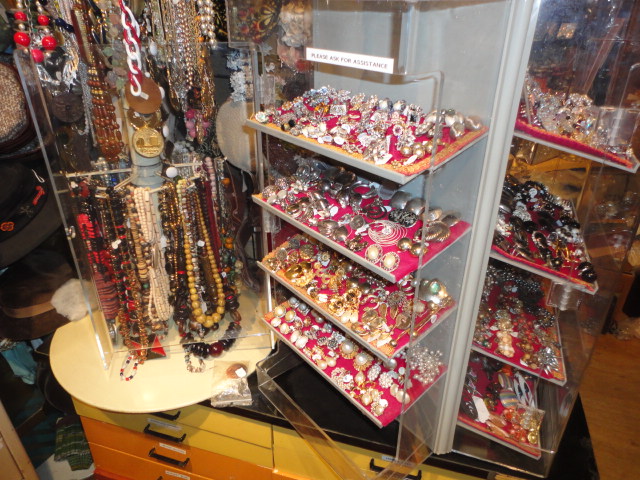 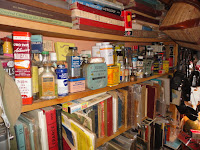 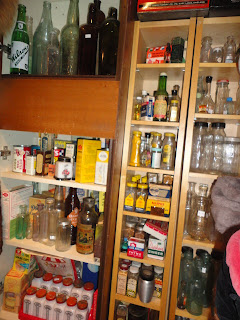 It's a good destination for the intrepid shopper who likes the hunt as much as the find!