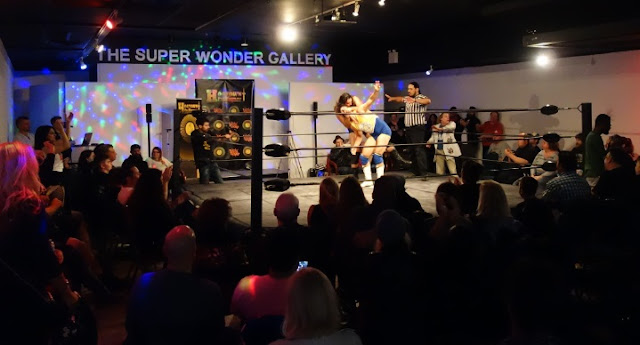 In this wide open art gallery near Bloor and Ossington, I watched Hogtown Wrestling in Toronto debut in front of about two hundred excited spectators. I marveled at the energy in the room, the number of pretty girls cheering the wrestlers, and the quality of these athletes and their showmanship and the believe-ability of each performance. And I saw something else there too... 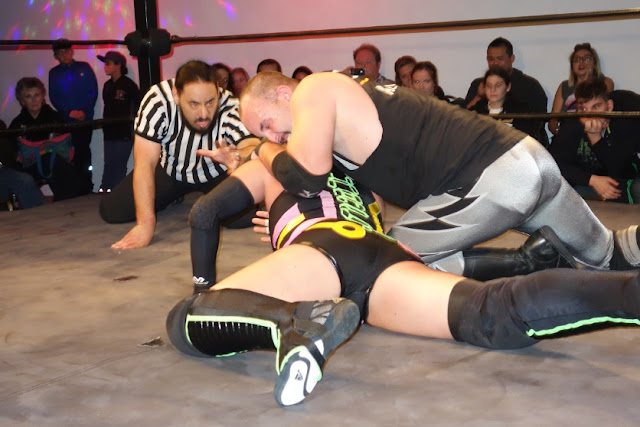 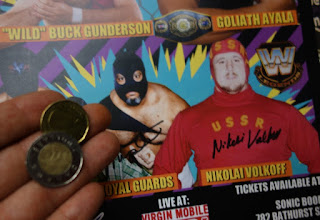 Dumpdiggers discovered heaps of collectible merchandise available for sale at the front of the venue. And after I pondered the treasures for a minute, I purchased some local Toronto wrestling posters because I was already infected with stories, the genre and the mise en scene of the historic occasion. 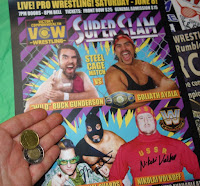 I paid three bucks each for two wrestling posters that were marked with the name of the previous wrestling league; VCW or Victory Commonwealth Wrestling. Click the pics and you can see the poster is signed by Nikolai Volkoff, the wrestler who was visiting from Russia. The man who sold me the posters informed me that Nikolai asked to sign the posters - it was his idea. He said that's how its done in Russia, and he's signs local match posters all over the world.I didn't think to ask if he'd won or lost the match? Perhaps someone could tell me in the comments?

This image on Twitter shows the new banners for Hogtown Wrestling coming fresh out of the printer at a Toronto event signage company, Sign Source Solution. 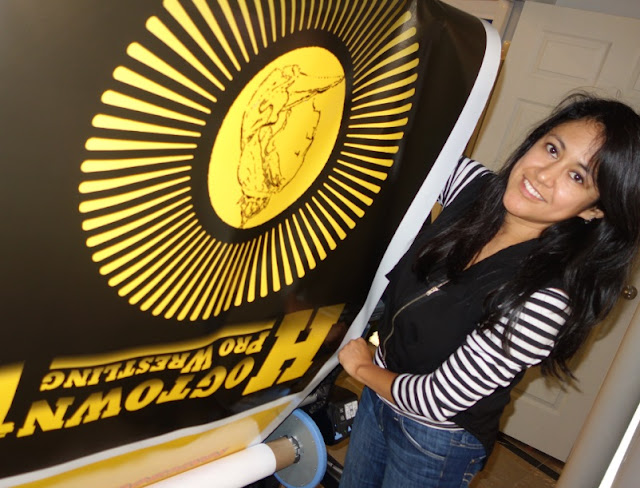 This is Toronto local wrestling kitsch, and it’s different from the mainstream professional wrestling merchandise because its just one step above ‘homemade’ and is issued in very limited quantities. I suppose if these items were pieces of wooden furniture they might be considered primitives. 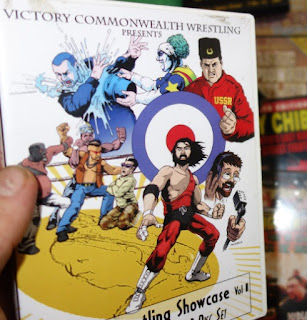 The same rules apply; the material made by these amateur artists is real and genuine and it looks good in your house. In this case, the two posters I purchased will line a closet where I keep gear near the front door, a man cave cubicle. I reckon the wallpaper job I'm doing there will survive me and endure for many decades as an impressive shrine to these local heroes.

The local 'live wrestling' event posters and artwork on DVD box covers are made by promoters for small shows in downtown gymnasiums and fitness clubs, but what makes it valuable? Well to be fair, it really isn't that valuable today, however if one of these posters glimpses a movie star at the very beginning of his or her career...  That is just one way this merchandise can accrue value.


Wrestling posters can increase in 'value', both monetary and cultural worth, when they have,

From what I know about collecting merchandise in general and all I know about Hogtown Wrestling specifically, I’m thinking some of the material could be a good investment. Look here at this marvelous collectible celebrating a Toronto mayor Rob Ford look alike wrestler who offered another interesting perspective (satire) on local politics in 2014. 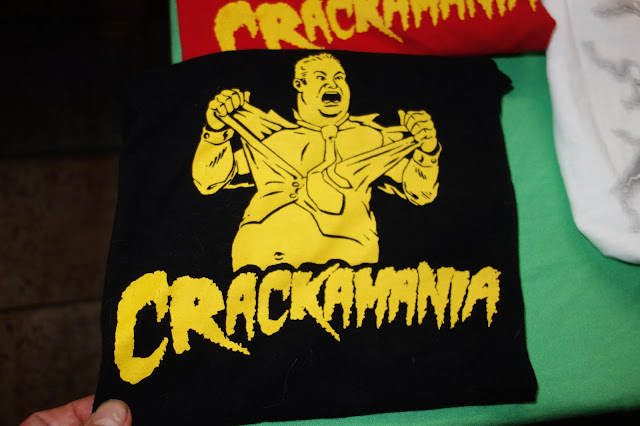 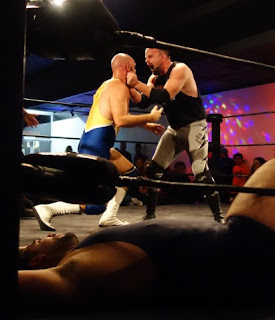 Could one of these performers go on to become a big star like The Rock? or maybe enter politics like Jesse the Body Ventura?  Buying merchandise with their names and personas is like making a small bet on their success.

We all remember holding or seeing the Wayne Gretzky rookie card before it was worth hundreds of thousands of dollars. I hid one in my childhood bedroom because my uncle or maybe it was my Grampa told me that he was a 'once in a generation player'. Of course I can’t find that blasted card now, and that causes me great angst, and so its with the same apprehension that I walk by these tables full of athletic memorabilia and wonder about future demand for such niche stories and images, some signed by the performers, like the colourful character seen below; The Hacker meets his fans in person at each show to autograph posters and photographs. 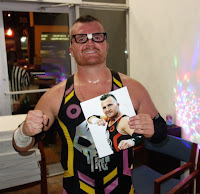 The Hacker won his match against Nick Watts, whom you can see wrestling Jim Nye the Science Guy above left. There were a lot of people cheering The Hacker's victory over Nick Watts and he was treated like a real celebrity when he appeared out front to sign autographs. This charismatic good guy wrestler has a devoted fan base that wears his signature broken glasses at shows. I'm sure the people who write these stories are aware of his growing influence and will arrange his matches in such a way that he rises higher in the rankings. His character is riding high on gimmicks that have impacted the audience and given them something to remember - he becomes someone to cheer for, someone to care about. 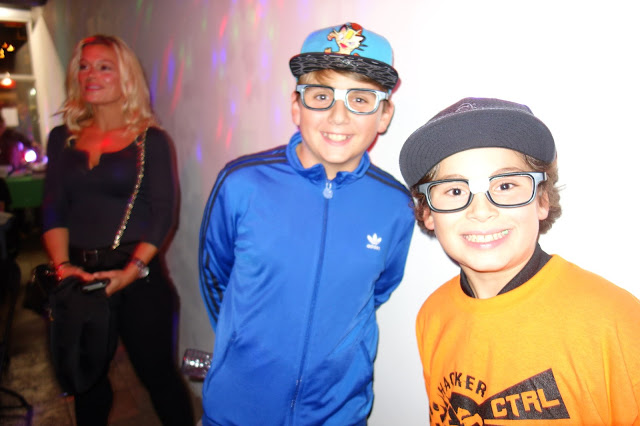 The Hacker's young fans will tell you the future of Hogtown Wrestling in Toronto is very bright.

Is this the start of a Golden Age of local wrestling in Toronto, Canada?

Let’s consider the 1980s wrestling 'boom' in the USA; the popularity of professional wrestling exploded in the 1980s due to the rise of pay-per-view and cable television syndication deals alongside the acquisitions and maneuverings of two notable promoters. Here in Toronto, Hogtown Wrestling has a Rogers TV deal and is working on improving their websites to carry short videos of individual matches. The wrestlers themselves are sharpening their social media skills to better push content on the website and promote their own appearance in the ring. 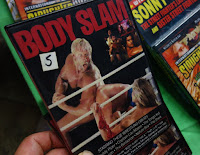 The Golden Age of Professional Wrestling in the 1980s started when Vince McMahon signed AWA superstar Hulk Hogan to crown his enterprise 1984. To play Hogan's nemesis, he signed talents including World Championship Wrestling heel "Rowdy" Roddy Piper and AWA manager Bobby "The Brain" Heenan.  My favourite was Hacksaw Jim Duggan who carried a sawed off 2x4 with him and would use it to clobber people, which I knew couldn't possibly be allowed in the rules, but I liked Hacksaw Jim Duggan anyway because he walked the fine line between loved and hated by the masses. You can see him squaring off with Roddy Piper in this DVD box cover on the left.Click the pic to see the full sized image. The DVD was for sale for five dollars which was the top end price for all the material on the table. 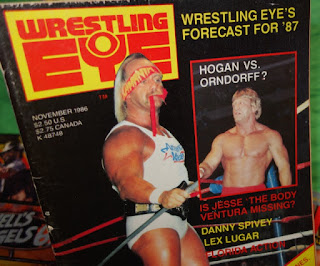 Today you can buy all manner of Wrestlemania collectibles on eBay and most have Roman numerals so long it would take me a minute to work out the number. The first Wrestlemania was 1984 and WrestleMania VI on April 1, 1990, is acknowledged as the end of the 1980s wrestling boom. The event saw one of the last WWF appearances of André the Giant. Anything connected to those first six shows are solid gold today.

I believe the commercial success of The Wrestler movie also helped wrestling get started again in Toronto. The film received universal critical acclaim and won the Golden Lion Award in the 2008 Venice Film Festival in August.  I mention this because it was the hero's story that captivated audiences and not the wrestling really, although that was excellent.  And this is what I see occurring in this league and other sports theatre operations in the city - its a new and wonderful place to tell poignant stories about ourselves. And it spawns a myriad of collectibles to chronicle our times.
Posted by rob at 7:46 AM No comments: