Alexander Ferguson MacLAREN, M. P. for North Perth, was born in Perth, County of Lanark, on February 3rd, 1854. He is the son of John MacLaren, his mother being Ellen Buchanan Ferguson. Some of what I know about this man and these antique stoneware cheese pots comes from History of the County of Perth, 1825-1902
William Johnston, 1903. pp.548 and 551-552.

Dumpdiggers knows that Alexander MacLaren was a cheese buyer for a major cheese importer in the 1870s who soon after became cheesemaker in the 1880s.

In 1892 this man introduced a new dairy product to the world, "MacLaren's Imperial Cheese." which may have been a more spreadable food product, as it was contained in the ceramic jar seen below (after KRAFT bought it?). For distributing this perishable food product, several offices were eventually set-up in Toronto, New York, London (England), Chicago, Detroit, Mexico, China, Japan and Africa. 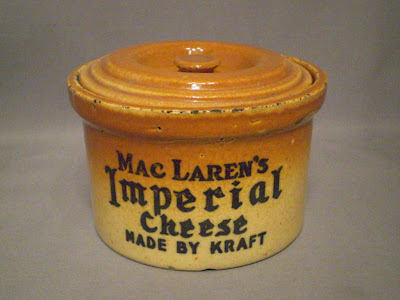 This one food product made Alex Maclaren rather famous, also his skill as cheese critic and buyer and seller for example although still a young man, he was chosen as sole judge in the cheese department at the Chicago World's Fair. Canadians carried off many honours at the event.

Alexander MacLaren was a busy man. He was president of the A. F. MacLaren Imperial Cheese Co., limited; president Imperial Veneer Co., Toronto and Sudbury; president Imperial Wood Fibre Plaster Co., of Toronto; director of Slate and Cement Co., Atlanta, Georgia, U.S. with capital holdings exceeding $2,000,000. He was also director of the Industrial Fair Board, Toronto, and chairman of Dairy Committee; he was also president of the Western Dairymen's Association from 1896 and 1897. 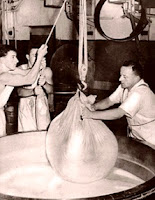 On April 29, 1885, Alex MacLaren married Miss Janet McLeod. Shortly after marriage MacLaren become active in politics. He was first elected to the Canadian House of Commons for the electoral district of Perth North at the general elections of 1896. A Conservative, he was re-elected in 1900 and 1904. He was defeated in 1908. MacLaren died in 1917 in Toronto from kidney problems. In 1920, MacLaren's cheese company was purchased by J. L. Kraft and Brothers Company.
Posted by rob at 5:29 PM 3 comments: 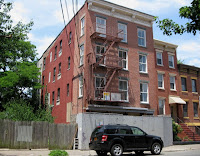 THE SECRET LOCATION: Behind the fence beside the red brick building is an empty lot. On this site, 130 years ago there was a bakery, which operated here between 1855-1865, and would have baked the bread that New Yorkers ate as they read news of Civil War battles. DS McGee writes, "Prior to the Civil War era salvage dig of this weekend, we investigated a shallow woodliner ( a latrine that had wood boards lining the interior of the shaft) which dated to about 1885-1915, and a long narrow 'trough' privy, 10 feet from end to end, 3 feet wide, and only 3 feet deep, which was constructed of stone and filled with mostly 1880s-1910s 'hutch' style beer and soda bottles." So readers come to understand that the dig team has been on this property before, and only just recently found the oldest 'well' as they call a privy (latrine). 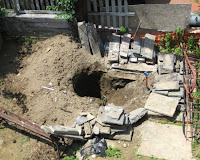 Over time the team sunk many test pits which are small probative holes until they encountered something, anything especially a rich deposit of historic glass - on this day they found the top of a century old well. McGee writes of this picture, 'Here is one small section of the 'privy well' open for the first time in about 130 years.' This 'well' was made of heavy stone, its circumference nearly six feet across, once emptied, from the floor to the top of the yard measured 7 1/2 feet. Click the picture, it expands and you can see they have a small privy rod - a four foot spring steel rod on which there is usually a short piece of grid pipe welded for a handle. 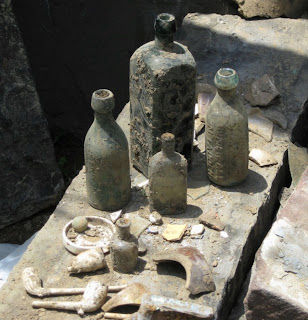 It was hot digging for two people but they had an early start. Their mission was to go on site and recover anything found in the ground before a professional excavation company goes to work digging up the ground for nearby building improvements. Both diggers are obligated to fill in the hole again before they leave - both are absolutely committed to savouring the day, and it was probably one of the longest days of their lives. 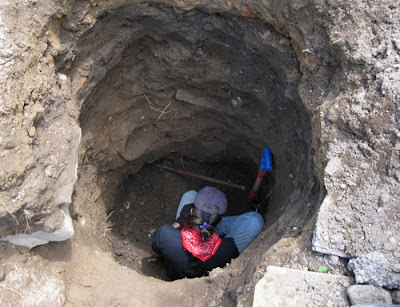 It took all morning and afternoon to get to the bottom of the oldest latrine hole on the property, but look what treasures they saved. 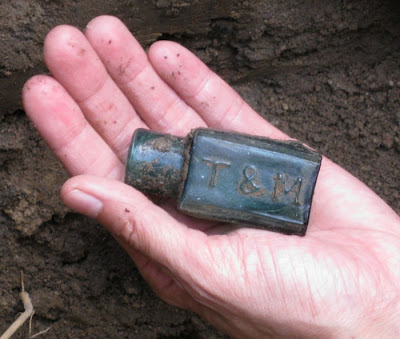 Perhaps most spectacular is this teal green "T&M" medicine bottle, heavily embossed on both side panels, and a very pronounced 'open pontil' scar on base, c.1855. This is a fairly rare find on any salvage dig and a nice addition to any New York druggist bottle collection. Now DS Mcgee has the task of determining just who or what was T&M? and what concoction was once sold in this container? 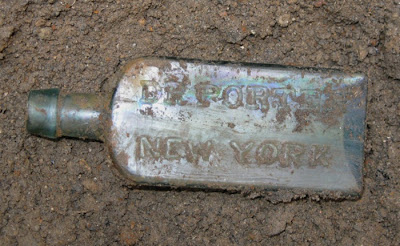 DR. PORTER / NEW YORK, c. 1865, seen here just as it appeared in the ground. And below are clay saloon pipes, manufactured between about 1855-1875. These are usually found without stems because the pipes were disposable in that the stem was seldom cleaned but rather broken off and shortened as it became clogged. 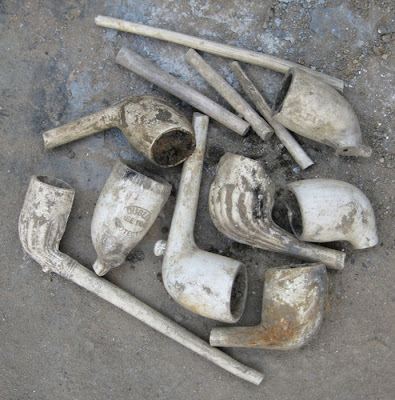 Here's the final stash or what most Dumpdigging teams will 'The Picks', because at the end of the dig everyone will pick from the pile (usually after flipping a coin to see who picks first). I would take that Civil War era umbrella ink seen in the front row. Click the picture - it expands! 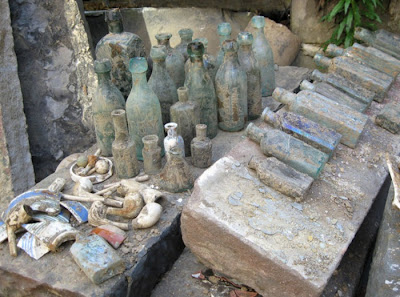 In his closing remarks DS McGee writes, '...despite the intense heat and labor intensive conditions, we were able to salvage over 30 antique bottles before the backyard renovation was underway.' Good work McGee. Keep saving history and sending us the pictures.
Posted by rob at 12:12 PM 1 comment: