Don't Be So Eager To Avoid Helping Friends Move, esp if the are moving into a centuries old building located in one of the oldest parts of Toronto.

A wise man who still has a strong back should eagerly volunteer to help friends move. Yes I know it sounds strange, and somehow counter intuitive, but like the god Bokonon says in Kurt Vonagut's Cat's Cradle that "peculiar travel suggestions are dancing lessons from God" by which I interpret to mean that it's good to step out of your everyday circle and do strange things when people ask you to accompany them, esp friends. And especially when they are as eclectic as my friend Clivero. Who has asked not to be lenzed here poor anonymous bloke. I helped the daft bugger move cause he couldn't get anyone else and could barely afford the cube van. And he had some big items down in the basement, one of which was a solid walnut box with some kind of Japanese doors that swing down vertical and of course Clive said nothing when we were lifting it... and it chopped my fingers. Ouch!

But otherwise it was a great day. Yes certainly I'll help clean out old basements full of memories and bad business deals. While sorting boxes I heard the whole story and filled in the blanks as I perused years of collected bits of this and that some trash and some treasure. It wasn't possible to throw out anything and we all walked away with boxes full of stuff. I got some nice wall clocks and a wood plane, 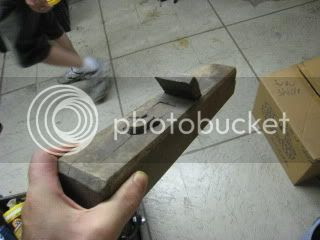 Here's a Smith Corona typewriter still sitting on the shelf where it was abandon twenty years ago when its original owner upgraded to a personal computer. 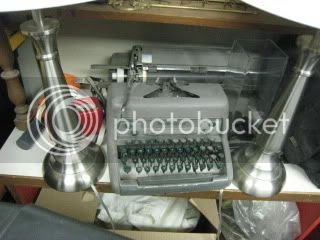 The shelves of the basement wall systems were stocked with junk that's too valuable to throw away, but not easy to liquidate by any cost effective method. 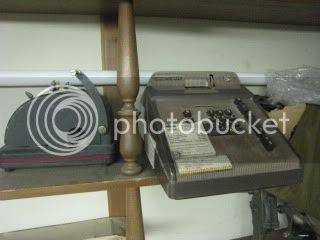 The Wenzel Projector Company circa 1940
There doesn't seem to be a Wikipedia file or much information about the Wenzel Projector Co. that I can find online, but I did manage to learn that in 1938 they made and sold a 35mm theater sound projector; Wenzel Ace 1939 was a sound projector 16mm? and although theatre projection technology was improving to include better soudn and brighter picture, historians note that Wenzel Ace projector like others on the market at the time, was a direct copy of another competitor named Simplex and their classic design projector produced years earlier. 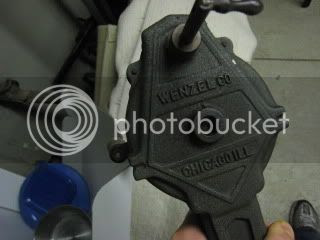 This is the left arm of a hand cranked reel to reel editor's board spool mechanism. The editor cranks these spools and cuts the footage under the light, cutting between frames. This is how you get to become a director - but cutting a story together and learning what matters. Same's true with blogging 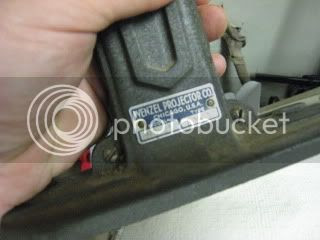 Interesting in seeing more old film production and projection equipment? Here is Tom A. Wilson's Flickr photostream in which there are many sets and many categories of antiquities in this obscure but noble genre.
Posted by rob at 12:48 AM No comments: