As keeper of the Dumpdiggers Blog I get a lot of wonderful emails, photos and cries for help from readers. People ask me to appraise the things, give proper names of things, and contact info, or they write long accounts of historic digs but fail to send any pictures. I will publish anything, but there has to be pictures... 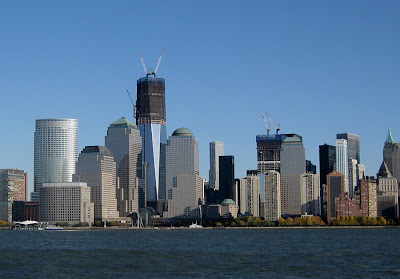 One such writer, a veteran Dumpdigger living in New York City named Daniel McGee always sends great pictures and text, and is a regular contributor. He writes about his own adventures with his gang as they research and dig up pioneer privies on abandon or otherwise transitional properties in Manhattan. Its fascinating stuff. Dan has style too - he usually leads with a wide shot of the area, and this time, its a picture of Manhattan! Here's the new World Trade Center being erected in the center of town.

Dan McGee and his crew specialize in finding broken buildings and exploring their backyards. They dig test pits and only sink shafts when they strike bottles. They liberate history from holes in the ground just days before the backhoes and bulldozers appear to demolish structures and excavate the earth, and take everything away.

Dan writes (his words until END),

'El Monstro De Gotham' is Spanish for 'The Monster Of Gotham'.  The privy-well is among the largest ever encountered here in NYC, i.e., Gotham (however it wasn't exactly deep at only 7-8 feet but I may have covered that in the other notes). 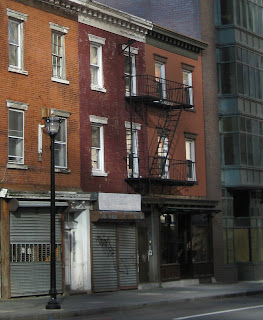 The property we were digging on will soon be redeveloped...which is the main reason we were able to go in and salvage what we could, before they remove the old well and its contents.  The point is, nearly all the digs we undertake are unpaid 'salvage operations', in the sense that the areas have/or will-soon-be totally altered/ destroyed by necessary developments.  As such, we consider our 20+ years of volunteer digging and investigating activities, including documentation via photography, article writing, bottle and artifact retrieval and processing, etc., to be an integral part of the Historical Digging record nationwide; and perhaps even further afield in some cases.

The site is part of a row of old buildings, circa 1840.  The privy-well (the old outhouse vault, chamber, etc.) was uncharacteristically made of freestanding redbrick; they're usually constructed of freestanding field-stone in the New York Metropolitan region; in that sense it was somewhat similar to a rainwater cistern when awe first opened it up at had a look.

To make a long story short, the way in which I became aware of the potential dig was this: After getting off the subway with my gear and swiftly heading to a particular spot on a construction site where I knew the owner would probably allow me to probe and test dig that afternoon...A faint voice (or instinctual urge, intuition or whatever) goaded me to walk down a certain street a couple blocks away, so I did.  Several blocks later I forgot all about the 'voice', and, that's when two women began shouting 'Hey, Hey'.  It was cold and they had their hoods up so I didn't recognize them as I briefly turned back to see who it was.  I naturally assumed they were mistaking me for someone else.  Then, from about a 100 feet away down a side-street I heard my first name called out...how odd the guy they were looking for had same name as me (I still didn't recognize them due to the distance between us).  Then, something to the effect of 'we'd recognize that probe anywhere...!' 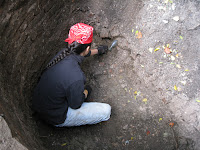 After all it is fairly unique in appearance, particularly when being taken up and down the streets and avenues, not too mention the often overcrowded and bustling subways of New York.  Again, long story short, some good friends of theirs had been holding up their property renovation until the back corner spot could be investigated; they'd had us in mind all along but the actual connection wasn't made until right at that moment.

On this historical dig, the massive 'double privy' (privy well, privy chamber, or privy vault), turned out to be the largest we've encountered so far here in the New York Metropolitan area.  Measuring over 10 feet wide (!) and 7 feet across, thankfully it was only between 7-8 feet deep. 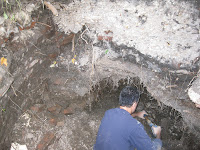 For the record, had it been the customary 10-15 feet deep, the logistical problems we encountered would not have allowed many of the bottles and assorted artifacts to be safely salvaged, or for the operation to be completed entirely. 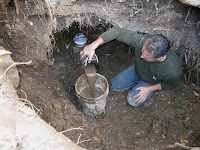 For instance, on the second day our skeleton crew had to bail many gallons of water which were continuously seeping into the active layer and rendering successful extractions of bottles and artifacts nearly impossible the entire time; not too mention doubling the workload for the duration of the excavation.

*There is no doubt that this very large vault was used by two adjoining townhouses, which were built around 1840 or so.  In fact it's outer circumference extended 6 feet into what would have been the neighbors yard back in the mid 19th century. 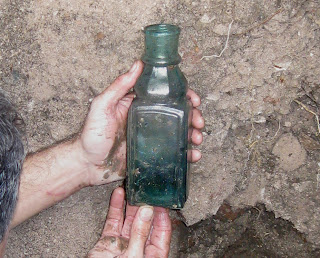 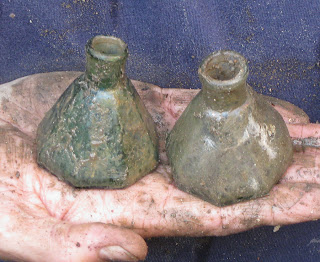 Also, like most others we've investigated on historical digs over the last 2 decades, the privy-well had been dipped (thoroughly cleaned out, or prohibitively disturbed as the 'ARKO's' are fond of saying) to about only a foot or so from base level, most likely right around the time modern plumbing was installed at the residence. Despite this very common scenario, i.e., the stark reality that the first 6 feet or so of dirt we bucketed out was merely sterile back-fill material, essentially devoid of bottles and artifacts, we made many interesting antique bottle discoveries down near the floor of the vault. 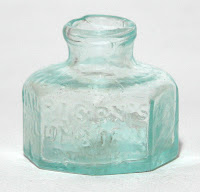 We found a few rare early Patent Medicines including, 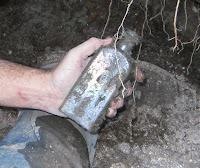 "Hastings Compound Syrup of Naptha" circa 1855-1860. This aromatic substance was invented in London in 1848 by Dr. Hastings who promoted his formula as 'The great Remedy for Consumption, Asthma, Spitting of Blood, Night Sweats, Husky Throat, Wasting of the Flesh, Coughs, Colds and all Diseases of the Chest and Lungs. Contemporary newspapers ads claimed that Hastings’ compound was being used in the hospitals and among the best physicians."

Cobalt blue, eight paneled teakettle ink, circa 1875. This is gorgeous and in great condition. 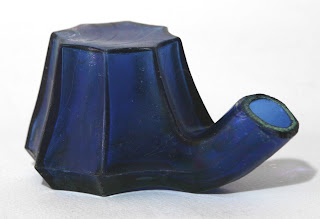 There were four of us involved with the historical dig at various times throughout the three days of investigation, myself, Mya, JJ Galione, and "Celtic Willy" from Sligo town.

As is nearly always the case we were incredibly busy during the entire salvage excavation...we never had a chance to get decent pics of the last 2 helpers or to take many good dig shots for that matter.  In fact the best examples are the ones you see here and on the Facebook Page. 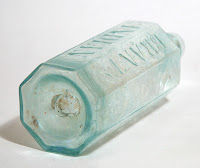 BRANT'S INDIAN BALSAM, circa 1855. The second pic to the left shows bottom, displays its pontiled base.

To the right are an assortment of bone and ivory toothbrush handles, circa 1850s-1870s.

In summary, there were many smooth base examples ranging from 1885-1865, there were over 30 pontiled examples, a half dozen tobacco pipes, an equal number of bone or ivory toothbrushes, and a bunch of ceramic and pottery fragments. The latter, along with a bunch of earlier bottles and so on, were trampled upon, decimated that is, as is almost always the case on these historical digs, while the dippers went about their lowly, odoriferous task of cleaning out the reeking night soil deposits back in the late 19th century. 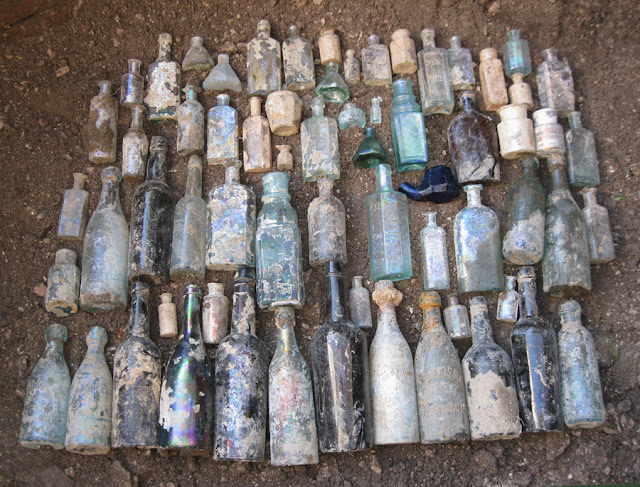 Despite their heavy footwork and vigorous shoveling as they went about the grimy process of acquiring waste-generated fertilizer, over 75 intact bottles, some manufactured as early as the 1840s, were reclaimed from the shadowy environs down below.