The Wise Old Man is a good numismatist that ponders his pocket change. He sometimes smells the bills in his wallet and studies the stamps on his letters, and he inspects every coin he receives for clues to the currents in his life.

Dumpdiggers will sometimes find old coins in the drawers of decomposing furniture, or under the baseboard trim in old houses. Coins are sometimes discovered under floor mats in derelict cars, and on the bottoms of drain pipes and in the pockets of old clothes – but old quarters, dimes, nickels and pennies are worth much more than face value if they happen to be what currency experts classify as 'error coins'. 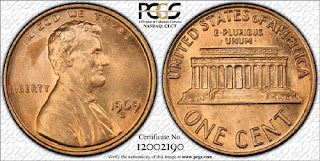 Tomorrow, while I wait for the bus, I'll check my change purse for a 1969-S Lincoln cent penny with a doubled-die obverse. That's because Dumpdiggers has just learned that this rare copper coin (in mint condition) is worth over thirty thousand dollars!

The 1969-S cent penny with a doubled-die obverse is the subject of Treasure Hunting’s January 24th post. This entire blog is worth reading from start to finish - authored by Shaun, Matt, Elizabeth, and Adam the metal detecting resource is the best Dumpdiggers has ever encountered. The above mentioned post links in turn to an AboutCoins article that was written by Susan Headley and her knowledge appears to be the synthesis of a book entitled 'Cherrypicker's Guide to Rare Die Varieties' by Bill Fivaz and J.T. Stanton. 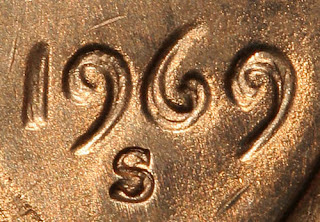 Dumpdiggers honors the two known Mint State Red 1969-S cent doubled-die obverse pennies with some delicious history. The rare coin in these close-up pictures was discovered by a collector named Michael Tremonti who was examining two rolls of uncirculated 1969-S cents on . He must have wet his pants when he spotted this isotope. And I have no doubt the well known numismatist Ken Potter was also excited when he (Potter) submitted the coin to Professional Coin Grading Service (PCGS).

Tremonti's very special copper penny has strong doubling on the obverse in the date, 1969, and the words, and IN GOD WE TRUST. The aberration is described by Potter as a "Class I Rotated Hub with counter-clockwise doubling."

This rare coin has an incredible story. Earlier known examples were seized by US Secret Service in a bid to thwart a counterfeiting scheme (to make rare pennies? weird) in which two people were charged and convicted. You can read about all this on Dave Harper’s buzz on Numismatic News.

Numismatic News also reports that David Hall, PCGS co-founder and president of Collectors Universe, Inc. (NASDAQ: CLCT) remarked, "I was totally amazed that this coin could turn up out of nowhere. The coin is completely original and full mint red. It's a beautiful near-Gem example" after inspecting Tremonti’s treasure.

Here's a handy chart from PCGS from which you might gain a new perspective on your pocket change, and the same company authors a guide for starting your coin collection.

Here's a list of rare coins that could be in your pocket right now,
The following is from the same coins.about.com article; Dumpdiggers can give you the skinny on the most valuable error coins that you might ever hope to encounter, especially if you live in the United States. 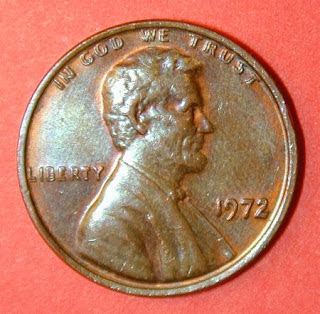 3. 1972 Cent with a Doubled Die Obverse
The 1972 (no mint mark) Lincoln Cent doubled die variety shows strong doubling on all elements. Approximate Value: About $500 in fine shape or better.

4. 2004-D Quarter With an Extra Leaf
There is an extra leaf on the lower left-hand side of the ear of corn on the reverse
Approximate Value: $200-$300 in mint condition.

5. 2005-D Speared Bison Reverse New Design Nickel
This variety results from a gouge or crack in the die that created a line below the E in STA 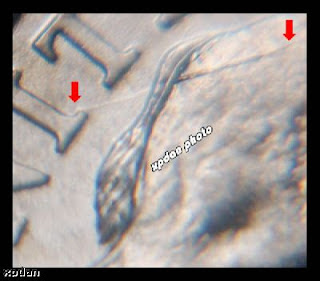 TES so that it appears as though a spear bisects the bison. Approximate Value: From $75 rough shape to $1,400 mint. Here is a sale on eBay for a roll of these 'speared bison' nickels and the picture I've used in this post was published by the Seller.

7. 1982 No Mint Mark Dime
This 1982 dime is missing a mint mark (a letter detailing where it was made). Approximate Value: About $30 to $50 in normal condition and more for higher grades. 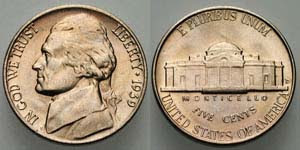 The photograph shown of the spear in the rump of the bison nickel is NOT an 'official' Speared Bison Nickel. The ONLY official true Speared Bison Nickel is a 2005-D, and the spear runs from the E in States (of America) through the bison's body, coming out on the underside of his belly. The photo shown is a cheap knock-off, and is way shorter than the true and original "Speared Bison". Here is a photograph of the real deal - at the following URL: http://www.coinresource.com/news/news2005/Speared_Buffalo_Nickel_2005.htm

The photo shown is not a true Speared Bison nickel. The only true SB nickel is 2005-D with the spear starting at E in States of America/top of coin - and it runs through the bison's body, coming out under his belly. The photo shown on this block is a 'short' and cheap knock-off (copy cat)and is NOT a Speared Bison Nickel. BUYER BEWARE! Here is a TRUE photo of a real and original Speared Bison nickel: http://www.coinresource.com/news/news2005/Speared_Buffalo_Nickel_2005.htm

The 1972 DDO picture was taken from my website and is an image of my coin. www.foundinrolls.com www.askaboutcoins.com

If I have a 1969-s in my collection of coins,what happens next

I am having 1959 mule coins very rare Lincoln cent 10 numbers.what is the rate of that