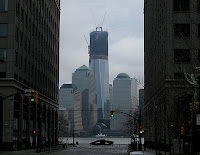 Good news. Veteran historical digger Daniel McGee, a resident of New York City and core to the Manhattan Well Diggers has handcrafted another adventure filled digging story and graciously donated pictures and text to Dumpdiggers for your reading enjoyment.  Like always, the story begins with a way cool shot of NYC and here again is the new World Trade Center nearing completion. Now without further delay, lets tunnel back in time 150 years... 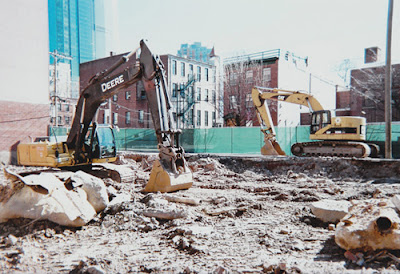 While out drumming up some digs, we noticed an entire section of a city block being demolished. The old maps showed this area had been laid out around 1780, and this was one of the original cobblestone streets! These old house-lots have lots of potential for subterranean discoveries in their long buried, long forgotten, elusive backyard privies. This location was densely populated and lined with buildings by the 1820s-30s, including a sizable schoolhouse by the 1840s, which is a key period in bottle manufacturing history.  Recently all the buildings had been knocked down and the bare earth exposed. This sight inspired several more recon trips. 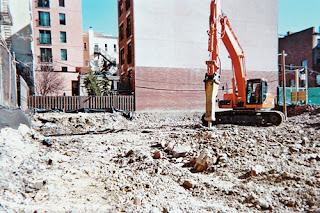 On our next journey to the site we observed all the telltale signs of a disturbed privy. The evidence was there on the surface, including a large piece of an early banded bowl with a worm /cable pattern and a redware fragment with black splotching alongside it, a few dark blue transferware shards and some recently unearthed oyster shells resting beside desiccated food bones, all with night soil and ashes stuck to them.  Without any doubts, we knew at least one old vault had been penetrated by the heavy machinery processing the site.  In any case, we had to mobilize quickly. 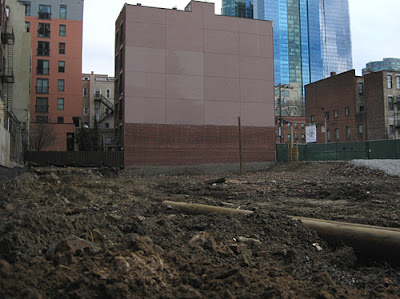 At the edge of a broken sidewalk scoping out the terrain, trackhoes were filling 30 ton dump trucks with weighty buckets of brick-rubble, dirt and debris.  Around noon the booms were resting and the engines idled down to a barely audible thrum. The trucks were tarped and gone, and the trackhoe operators off on a long break.  It was time to head back over to the edge of the site, and have another look around for the original lot lines.  This is usually a good place to search for evidence of privies and trash pits.  Even more so that day, since the spot had recently been scraped down 3 feet by a large machine.  This condition left certain features exposed which hadn’t seen the light of day in 150 years. 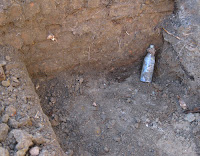 We began by shoveling alongside what appeared to be the remains of a freestanding redbrick wall. Brick by brick a second wall was outlined and then a third.  Without a doubt it was some kind of underground chamber.  We grew more excited as we found wood ashes, and three moldy leather shoe bottoms, a clay pipe with a bit of stem left on it dating to the late 19th century, a mouth-blown bottleneck here and there, and a bone or ivory toothbrush handle.

Doing all this digging and discovering took some time, as you can imagine, and we soon observed the guys in charge rounding the corner, returning from their lunch. They were visible working some distance away, and although their machines were running at full throttle again, they never drifted back over to our deepening hole. 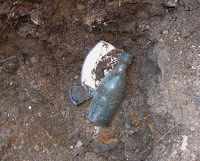 Descending into the bricklined privy-vault, we soon encountered a wide array of dirt encrusted antique glass bottles from the 1880s-1890s. At one point really pretty bottles were being discovered one after another.  The recovered specimens were perhaps not the very pinnacle of bottle collecting, but all were handmade examples of the art and sufficiently motivating for us diggers, with plenty more ground left under our feet to explore.

After identifying all four walls of the 5’x 6’structure and cleaning the dirt away, the dig went on for a few more hours until reaching the hardpan base. As we dug down we encountered several layers of bottles and artifacts, and some of the best ones at the bottom had been manufactured as early as the 1850s. 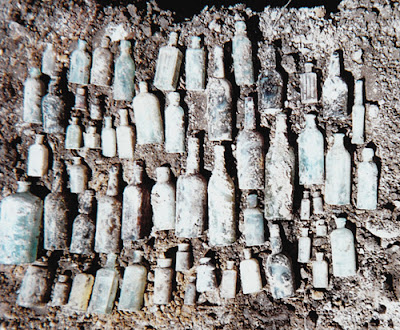 In conclusion we had recovered about sixty intact antique glass bottles ranging from 1850s-1890s.  An assortment of mostly generic pontils, two Civil War era sodas, a half dozen crude early black-ales, several smooth-based medicines, a handful of local pharmacies, hutches, whiskeys, and others were arranged for the picture.  We packed up the best ones and backfilled the hole.

Despite the major excavation being done on the site, we knew it was still possible a few more privies were concealed here. On our next visit we learned that a twelve story building with a large underground parking garage was being developed on the property, which guaranteed everything had to be removed before construction could begin.   Most of the original land had already been dug up and trucked away by the contractor, and the one slice which remained still had a 3 foot ledge covering it, including a layer of concrete with an asphalt cap. Amid the densely packed rubble at the border of the ledge we dug test holes to settle the matter as productively as possible before nightfall.  This was Dig II. 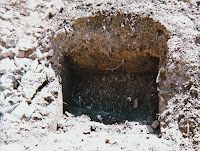 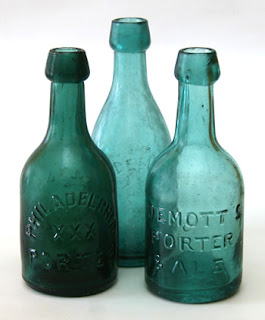 This dig was hard work.
Sharply contrasting the general ease of our first excavation, this area was a bitch. It wasn’t until after I dug deep and descending up to my neck into one of our narrow test holes that I found some encouraging evidence. On the end of my shovel I could see early transfer fragments. First one, and then another, and then other recognizable shapes began to appear. An early discovery was the forest green glass soda Philadelphia “XXX” Porter bottle and then a similar example in a much lighter shade.  Despite numerous setbacks, which I wont describe here, we eventually discovered a seam of bottles and chased the goody vein into dense pocket of broken pottery and glass, lying snugly within a promising bed of night soil. 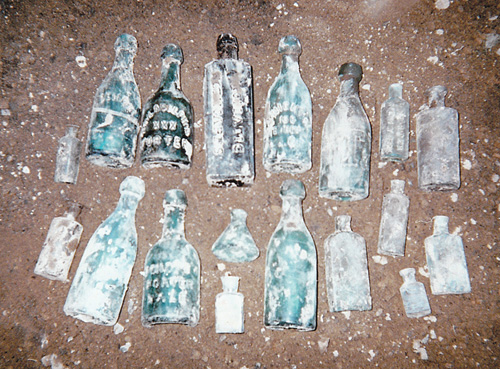 An intact ovoid crock with a local maker’s mark was eventually extracted from its formidable resting spot. This is an important example of the Potters' art, which was probably made down at Raritan Bay, somewhere around 1825-1835.  The privy also contained 25 intact bottles, half of them pontiled and half of them smooth based, half embossed and half blanks. 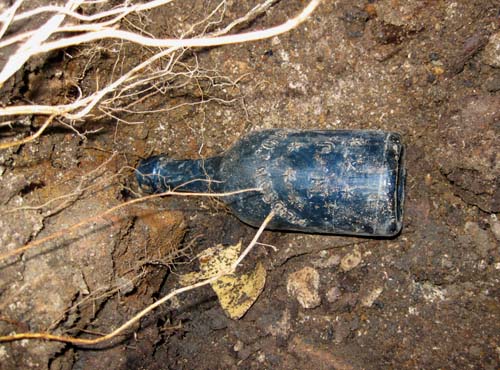 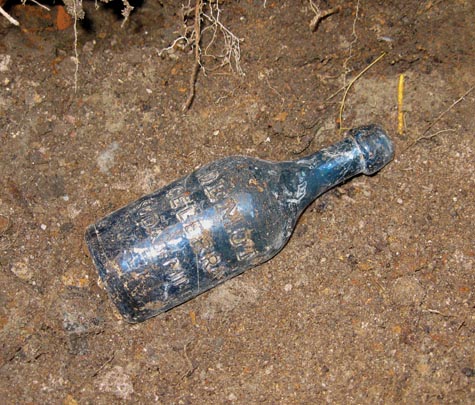 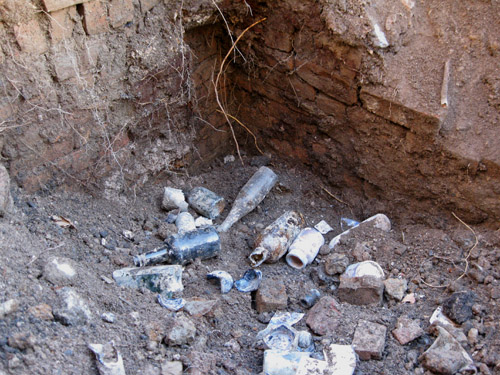 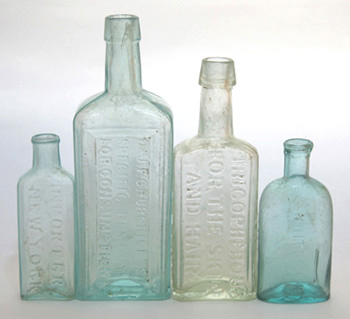 The oldest artifacts at the bottom of the second privy dated to about 1830. We had uncovered a pocket of good history here that included a colorful mixture of decimated tableware from nearly two centuries ago, all wedged between brick-bats, stones, oyster shells, wet dirt and damp ashes, but no intact antique glass bottles were found. There were no significant discoveries of any kind, which is, in my experience, quite typical when digging with pre-1850s privies. 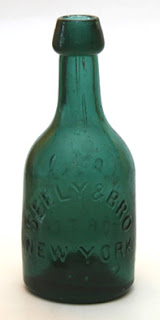 However the best things come to those who dig, and dig, and keep digging.

The following week, Dig III in another early brickliner produced the best bottle yet, an iron pontiled soda, in sapphire, from the 1850s!  This rare variant was discovered in a layer with 4 broken examples and a deep green soda from the same period missing its lip, along with a smooth based soda, an umbrella ink and a number of other intact bottles.

By our estimation there are probably 2-3 privies still waiting under the concrete at the far end of the site… we’ll keep you posted as things unfold.

www.TheManhattanWellDiggers.com
Posted by rob at 6:48 PM No comments: