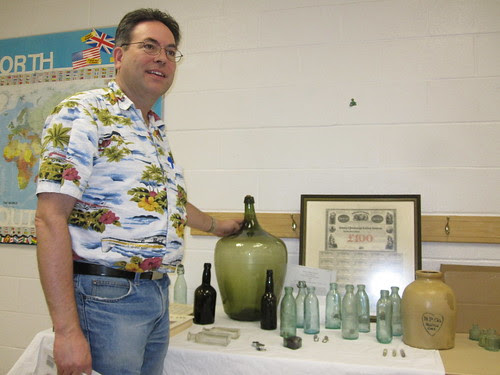 Sean Murphy during the Show & Tell handles his big demijohn, and details his summer finds, including the framed unsold Cobourg Peterborough Railroad stock certificates visible behind an array of rare Hutchinson soda bottles, and some Matthews gravitating stopper bottles, with the original glass stopper rods. The stoneware crock is something we'll discuss later...

Inside the meeting room in the Arbour Heights Community Center and Wilson and Avenue Rd in Toronto Ontario, I Rob Campbell found a welcoming community of experts that generously share with me (and you) their most precious insights, and hard-to-find data that is priceless information. These folks will do anything and everything possible to forward the search for rare Canadian bottles. Indeed it's the hunt for those elusive treasures that always evokes the best discussions - that and the display of strange objects, ideas and the talk of treasures-unknown always sidelines the official minutes. You have to be a bottle collector to truly appreciate the width and breath of their knowledge and understanding of colonial age and early industrial age goods. They collect the first bottles, glass and pottery pieces made in Canada. They know Canadian manufacturing and retailing companies better than most university educated historians esp as it pertains to packaged goods in glass bottles. The seventeen people present at the event are a fraction of the membership. The folks were there to make decisions about shows and displays, and talk about their summer finds. Indeed half of those that attended brought something to share and discuss.

This picture of a rare Nerviline bottle, procured by a veteran Canadian antiques picker named Mike Duggan, is from Kingston Ontario Canada is a prime example of the level of sophistication... 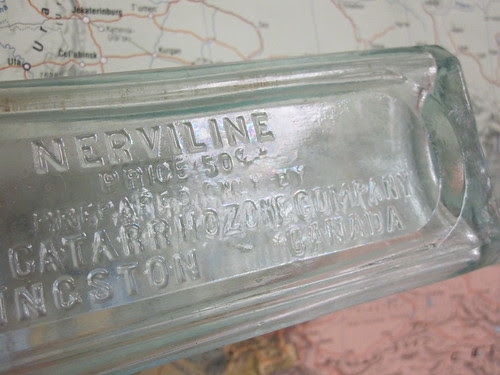 Thanks Mike Duggan. I just love this picture because it shows the price of the product; the value of 50cents is stamped into the glass. Does that make this an early mistake? Its definitely a rare isotope of common bottle and a legendary product line. Yes this bottle is very rare indeed. You can imagine the problems that caused. If you are a general store retailer in the early 1900s and you want to raise or lower the price of Nerviline, you cant change the price from fifty cents a bottle without some explanation. 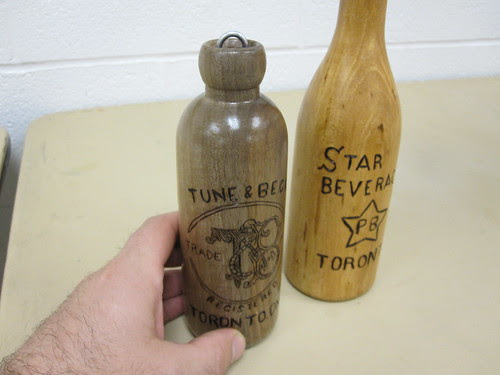 Also in the meeting we got to see the famous wooden bottles by Erik Tounonen that have inspired so much talk online.

That's right Erik's hand turned and carved wooden bottles are being discussed by bottle collectors all over the world. This young bottle digger is fifteen years old, and has sparked conversation on popular discussion forums. Here's Erik T wooden bottles debut thread on Antique hyphen Bottles dot Net discussion forum. Erik is only 15 yrs old . He showed up with a parent, who asked some very interesting questions actually, and she made some interesting remarks too. Everyone gave the young person some new ideas and sparked his bottle bug even more, if that's possible, with more insight into the art and science of finding colonial age dumps in Canada . 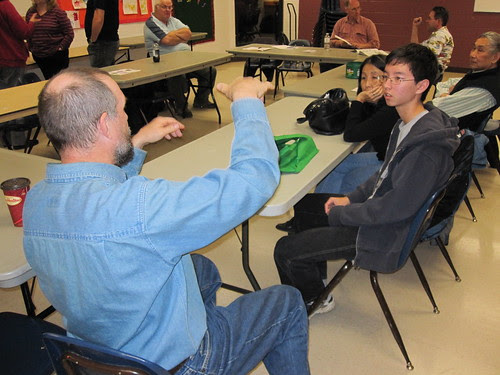 More notes about the bottle club meeting would have to include some non emotional reporting of the honest facts, first there was no coffee; an oversight made more profoundly acute by the appearance of gilded coffee cups in one of the displays. Secondly, the frequency and start time of the monthly general meetings was questioned by the Club President, who was the last to arrive and the main reason the meeting started late. lol 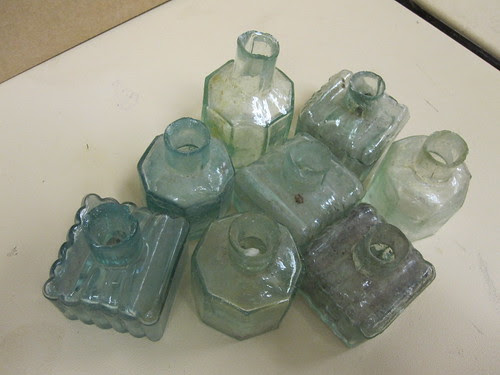 The meeting continued with a discussion about the finality of the venue and date for the annual bottle show - same place same date. Personally I was disappointed as I believe the Humber College arena which lacks a natural light source and is NOT handy for any potential consumers living in new condos downtown, is an event failure by design.

The meeting concluded with a random bottle raffle and draw for a mystery prize which was won by the president named Dave , I honestly cant remember Dave's last name and I will update this post to include more information.

Dumpdiggers hopes that by giving inside glimpses of Four Seasons Bottle Club events, I'm raising awareness about what actually happens ... hopefully more people will come out and join up , eager to study and learn the subculture and various antiques classifications relating to antique Canadian glass bottles, early Canadian pottery and British colonial age stoneware. I'm encouraged by the fact that Erik found the association he sought through this portal, and hopeful that I can attract other citizen diggers and passionate bottle collectors with more of the same thought provoking content and ideas.

iMAGINE IF YOU SAW A HEART SYMBOL SOMEWHERE EVERYDAY?
my friend has a strange and powerful curse / gift ... Casie, the curious companion I brought to the bottle club meeting confessed to me earlier yesterday that she sees a heart symbol somewhere, every single day in her life, whether she wants to or not. When she first told me of her gift / curse I laughed - what a wonderful thing to have and notice. But then imagine if that happened to you... How would you feel?

I See HEARTS Everywhere... a blog by Casie Campbell

So of course I was overwhelmed when, much to my surprise, as we walked into the bottle club meeting and glanced at the displays there it was, her heart for the day. 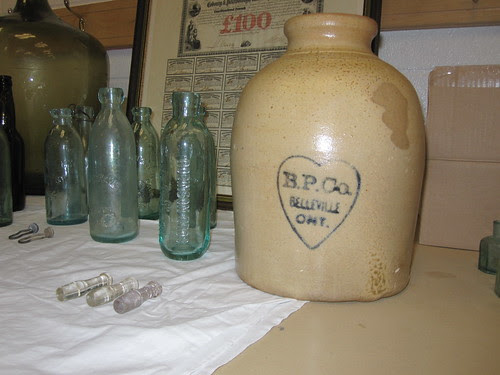 Thanks Sean Murphy for bringing and sharing this wonderful treasure.
Posted by rob at 10:05 AM 1 comment: