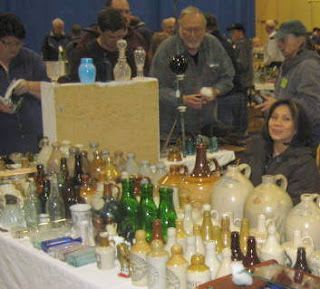 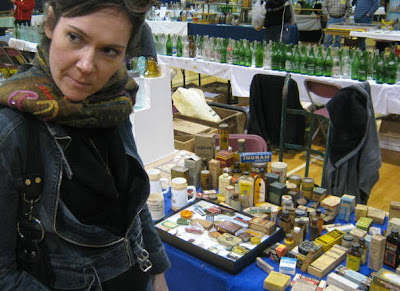 The Toronto Bottle Show is always an emotional experience for me - it breaks my heart to see great pieces of glass selling for ten or twelve dollars, and whenever I spot something that I have in my own collection I almost don't even want to look at the price, as I'm sure it will always be priced to move here and cost much less than I paid, or had valued in my own head. I think it would be worthwhile to visit this show and spend forty thousand dollars buying the best pieces - it would be a great investment in the future.
Posted by rob at 6:39 AM No comments: 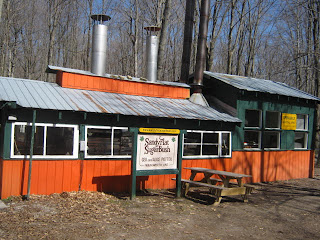 Maple has a season. The Ojibwa people knew this period of the year was special, and they called this moon phase the "sugaring off" period, or the "maple moon" or "sugar month". The tradition of sugaring off became established in communities in the deciduous forests of North America, and has survived to the present time. 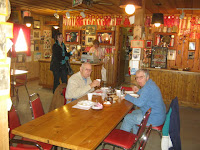 with Hugh and Lorene Campbell, the local beekeepers / honey producers. Campbell’s Honey house is located less than 3Km away from this sugar bush, between Roseneath and Warkworth. It’s a delicious coincidence because maple syrup is a pure, natural sweetener, the only other liquid natural sweetener being honey. But unlike honey, maple syrup has more trace minerals essential to good nutrition: potassium, magnesium, phosphorus, manganese, iron, zinc, copper and tin, as well as calcium are found in concentrations 15x higher than honey. And its important to note that maple syrup contains only one-tenth as much sodium as honey.

It’s a little known fact that the manufacture of maple sugar is limited to the Maple Belt, the hardwood forest stretching from the midwestern US through Ontario, Québec and New England and into the Canadian Maritimes.

Relics of the Maple Sugar Industry at Sandy Flats Sugar Bush
Hanging on the wall of the pancake restaurant at the Sandy Flats Sugar Bush is a world class display of vintage Canadian maple sugar industry antiques. I briefly paused to admire and photograph the collection of vintage tools, and equipment, including some very valuable hand carved wooden maple sugar molds. 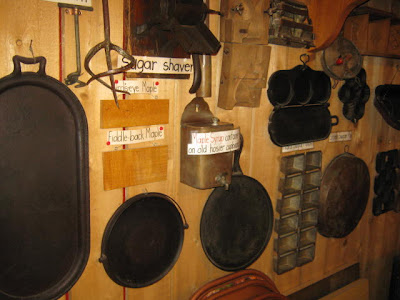 Maple products are harvested exclusively from the sugar maple (Acer saccharum) was known and valued by the native peoples of eastern North America long before the arrival of European settlers. 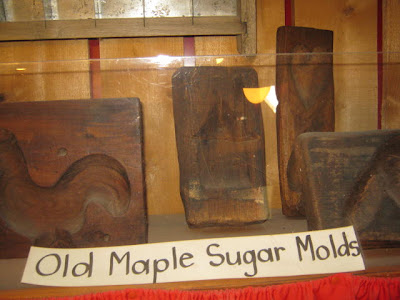 An Iroquois legend tells of the piercing of the bark of a maple and the use of the "sweet water" to cook venison, a happy accident which established the culinary tradition of maple-cured meats.

French settlers probably learned from the Indians how to tap trees to obtain sap and how to boil it to reduce it to sweet syrup or sugar slabs to be stored for later use. 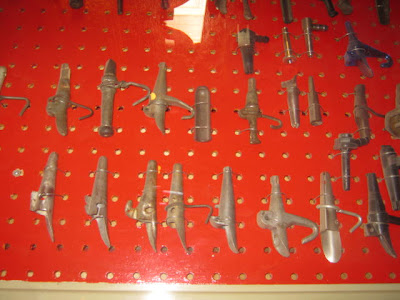 George Potter’s family diary records his great great grandmother’s sap spile as being a simple cedar splint, in keeping with native practices. Here is a reprinting of the material I found on the wall.

From the diary of my great, great grandmother, Mary Mac Kenzie Ross, 1840.
“John was busy clearing around our cabin, getting a plot ready to spade for potatoes in the spring. A neighbor noticed he had several short cuts of cedar logs. ‘Mr. Ross’, said he, ‘you want to lay those aside and in the winter make sap troughs and spiles ready for the run of sap in the spring.’ Then he told him how to make maple syrup. We were quite taken back there was so much work about it, because in Scotland they thought maple trees ran syrup when they were tapped. However, we borrowed an iron kettle and tapped the maple trees in the spring, boiling the sap outside, although it was dark and smoky tasting. We thought it was a treat.”
George Potter

Other Writings on the Wall at Sandy Flats Sugar Bush

George, growing up as a young boy helped his father collecting and boiling syrup, so when the Potter’s first bought the property tapping the trees was just a hobby. Alice working as a schoolteacher and George owning a men’s clothing store downtown Warkworth. They began with 50 taps, 200 taps then progressed to more than 500.
What started as a hobby soon became a business as Alice and George found themselves running sap all through the night. Alice and George made a decision to retire from their current jobs and commit themselves to the Sugar Bush. As a result of their decision they began to upgrade their equipment. They soon installed a modern pipeline system to transport the sap, this meant more taps (5500), more sap. With all this extra sap a larger evaporator was needed. Today they operate 2 wood-fired evaporators and use a reverse osmosis (nicknamed R.O.) method of making maple syrup. Soon not only were they making maple syrup but maple butter, maple stirred sugar and other syrup products. All of their products are 100% pure. In 1987 the Potter’s began entering their syrup in local fairs winning ribbon after ribbon, but the local fairs were just a guideline to the larger fairs. It proved to be worth their time as it led them to winning a 4 World Championships at the Royal Agricultural Winter Fair, Toronto, Ontario in 1988, 1990, 1993 and 1994. Just a couple weeks ago the Potter’s were inducted in the Maple Hall of Fame in the Ameliasburgh Maple Museum.

History of the Land

Over the years the tree’s on the Potter’s land have been tapped off and on since the mid 1800’s. The first owner of the Sandy Flat Sugar Bush was William R. Losie who first began tapping the maples. The Miner Family, the next owners also tapped the tree’s as well as the third owners, The Milford McVety Family who continued tapping until 1968. The bush laid dormant until George and Alice Potter started making syrup in the early 1970’s.

The History of the Maple Syrup Festival

Originally when the Sandy Flat Sugar Bush became a business they had an “Open House” policy were people were invited to come as they please, tour the grounds and enjoy a traditional maple breakfast. A few years later in 1985 the Kinsman Club decided to get involved by hosting a weekend where club members would cook outdoors for visitors who attended the event. While at the Bush you can enjoy a old fashioned horse drawn sleigh ride, taffy on the snow, compare the native, pioneer and modern methods of gathering and processing sap, educational nature trails, join the log sawing contest, and listen and watch the old thyme square dancing and Potter Band. In 1987 the service club got involved by also hosting a weekend during March. Soon there were many more people wanting to contribute their interests and include the community. The 55 Plus club started organizing other events and a Maple Syrup Festival Committee was begun. Mary Hermiston as Treasurer, Vic Taylor and Jim Horne lad a service club committee. The Percy Quilters displaying a variety of finished pieces in the Town Hall, also a newly finished quilt is raffled off on the Sunday afternoon. Wood, works and wonders is another attraction you will find at the Town Hall where there is a display of handcrafted wood products for sale. Just beside the Town Hall you will find a petting zoo and pony rides. You can visit the antique show and sale at the Percy Centennial School where local antique dealers have brought together an extensive display of treasures from the past. An art show displayed at the Heritage Centre organized by the Northumberland Hills Art Association where local artists have come together for the show. On the festival weekend approximately 8,000-10,000 people traveling from all over.

Some Basic Facts about the Modern Maple Sugar Industry
From the Canadian Encyclopedia’s page on the Maple Sugar Industry, I learned that there are currently over 16 000 maple-syrup producers in North America, with over 80% in Canada. In 1995 total world production was 18 981 kl, of which Canada produced 14 890 kl. The province of Québec produced 13 540 kl, which represents over 90% of the total Canadian production. The rest of the Canadian production came from Ontario (5%), New Brunswick (4%) and Nova Scotia (1%).
In the early part of the 1970s, the traditional buyers were the large food companies. When the US Food and Drug Administration reduced the minimum volume of maple syrup that must be listed as an ingredient in products sold as "maple syrup" and "maple sugar" from 15% to 2%, sales plunged dramatically and the industry experienced a major crisis. Efforts were made to develop a new market aimed directly at the consumer and the growth of this market has rejuvenated the industry. Maple products are now consumed in over 30 countries. Maple syrup remains one of the best natural sweetening sources in the world. It is still served mainly over pancakes, but recently it has also been considered a condiment. It is now used in fine cuisine to prepare sauces, glazes and vinaigrettes. In addition to its use as a syrup or as an ingredient in fine cuisine, and capitalizing on its magic and mystery, some consumers around the World prepare concoctions for special diets or for purification purposes or during special events such as fasting.

Its clear that by the crowds at the facility that day that family operated sugar shanties, which are so evocative of Canada's pioneer past, will remain a thriving part of the rural Canadian landscape . In the future, Dumpdiggers believes that Canadian maple syrup industry will grow and prosper in as a natural sweetner. Much like single variety honey has found tremendous support in cuisine arts, maple sugar will rise in value in the modern food industry, and become the preferred sweetner of the world's finest palates.
Posted by rob at 9:48 AM 1 comment: