Beauty pageants were once a large part of our culture. In the old days, before and after World War II, there were beauty pageants for just about everything. I found pictures online that show regional beauty queens in every major tourist destination across Canada, and several corporate beauty queens representing our entire nation. In the age of print media and flash photography, this was seen as a great way to promote a retail business, and get people of all ages to focus on your goods. The prospect of finding and promoting a new celebrity attached to a company's name was a terrific incentive to corporate Canada.

For teen girls in the 1960s, the beauty pageant offered a real chance to finally be recognized as a princess, and start living life as a celebrity, if only for a year.

In my other job as a social media consultant and online marketing strategist, I've been doing some work for Miss Teen Canada and I've been studying beauty pageants and the illusion of stardom and celebrity cult that's so important to each event's overall success. For example, the size of the audience, and marital status of the Host, the quality and appearance of the designer swim wear, and of course the Judges themselves are key players in the media mix. The judges must be vaunted celebrities in order to bestow their celebrity status upon eager participants, and the excitement in the room builds as the evening draws to a dramatic conclusion.

Look at the SWAROVSKI CRYSTAL in this vintage 1962 era Beauty Pageant Tiara Crown worth approx $65 US on eBay. This was fashioned in California for some event that goes unrecorded today, but perhaps it was a splashy affair that was televised. 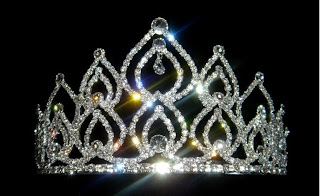 And this is my favourite, look at this 1971 DAWN BEAUTY PAGEANT cartoon comic book advertisement for a doll set that comes with a run way and HOST. This old comic book ad ran in 'Golden Age comic books' and other female teen publications as a promotion. The ad measures approximately 6x9 inches and features Dawn, Longlocks, Dale, Glori, Angie and Jessica. 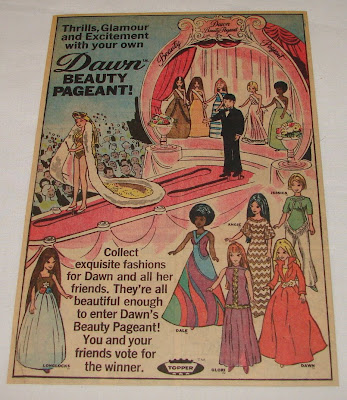 In the forty years between 1865 and 1905 a great many patent medicines, pain killers, hair tonics and even some relaxing beverages proudly advertised the use of cocaine as an active ingredient. That’s a forty year window of cocaine-as-medicine related collectibles. After I found this great article in the University of Buffalo archives, I just had to share some of it. Yes I've borrowed some images and text, but I've also added my own research and opinions were pertinent.

Cocaine was first synthesized in pure form by Albert Niemann in 1860 when he extracted pure cocaine powder from the leaves of Erythroxylum coca (more commonly known as the coca plant). Soon after it was isolated, cocaine was used to try to cure illnesses and fight pain because drugs composed of cocaine made people happy. A little too happy… 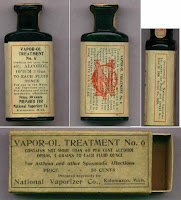 It wasn't long after the isolation of pure cocaine that people became aware of the addictive potential of the drug, which eventually led to the introduction of the Pure Food and Drug Act in 1906 (in the United States) which required all American drug manufacturers to list all of the ingredients on the product labels. Today, the use of cocaine as medicine had been tempered by past experience. Nevertheless, standard narcotic remedies like paregoric remained readily available into the early 20th century, and Benzedrine inhalers were marketed without prescription until the early 1950s. Codeine wasn't removed from most over-the-counter cough suppressants until the early 1980s.

Coca Wine, anyone? As the name suggests, this was a mixture of strong wine and cocaine. Metcalf Coca Wine was one of a huge variety of wines with cocaine on the market. Everybody used to say that it would make you happy and as a bonus it would also work as a medicinal treatment. I recently saw a bottle in the collection of a famous Canadian marriage counselor with a fancy office on Queen St W in Toronto.

Mariani Wine’s Vin Mariani was a very popular drink in both Italy and France in the late 1860s, and was perhaps the most famous Coca wine of all time. It’s rumoured that Pope Leo XIII used to carry a bottle on his person. Vin Mariani which was developed in 1863 by the Corsican entrepreneur Angelo Mariani who exported the wine all over the world where it won many international awards including a Vatican gold medal for excellence.

Yes we all know there was once cocaine in Coca Cola, and that’s another reason why early Coke bottles are such spectacular collectibles.

Inspired by the European success of coca wines, the alcoholic beverages that combined wine and cocaine, an Atlanta Georgia pharmacist named John Pemberton developed his own cocktail based on Vin Mariani and called it Pemberton's French Wine Coca. It proved popular among American consumers. But in 1886, when the State of Georgia introduced Prohibition, Pemberton replaced the wine in his recipe with non-alcoholic corn syrup. The new recipe was similar to, but not exactly the same as Coca-Cola.

At the end of the 19th century, the fear of drug abuse made coca-based drinks less popular. This eventually led to the prohibition of cocaine in the United States, and the removal of cocaine from coca wine as well as Coca-Cola, although the coca leaf remained in use in that example.

Maltine was very popular in North America. Produced by the Maltine Manufacturing Company of New York. Period advertising suggested that consumers should take a full glass with or after every meal, but children should only take half a glass.

Here’s a paperweight promoting C.F. Boehringer & Soehne ( Mannheim , Germany ). The object evidences the pride this German company had being the biggest producers in the world of products containing Quinine Sulphate and Cocaine Hydrochlorate. Additionally their 1906 ad states, "Prices no higher than for any other brand"

Cocaine tablets - the article in the University of Buffalo archives has a poor condition and poorly photographed 1900 era newspaper advertisement that reads ‘All stage actors, singers teachers and preachers must have them for a maximum performance. Great to "smooth" the voice.

I found this picture of a product called Forced March on the Cocaine.org information site. The testimonials promises the product, "Allays hunger and prolongs the power of endurance"

Cocaine flavoured toothache drops would make a majestic collectible today. I’m sure this product was very popular with children in 1885 and I read about a club in the late 1800s that would consume cocaine infused beverages before and during musical dance classes. The band would play music faster and faster until it wasn't a civilized gathering anymore
Posted by rob at 6:37 PM 4 comments: