This night was supposed to be their monthly club meeting? But one look out the window told me things might have changed. The weather outside was awful, and only getting worse. Eight inches of snow had already collected on the roads, snarling traffic throughout the GTA. I looked at my watch again; perhaps the meeting had been canceled?

Two minutes, to my relief Carl Parsons and Glenn Moorhouse strolled into the meeting room toting large Tupperware containers full of bottles, coffee and cookies. They were surprised to find me in there waiting, especially since we'd never met before. 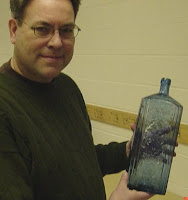 In the next few minutes a dozen people arrived. More tables were set up, and the meet and greet centered around the collectibles on display between the windows, and the coffee pot in the kitchen.

Although I was a complete stranger to them all, I didn’t have to introduce myself. Everyone already knew who I was. Most had been to website, or read this blog. Some had seen Nancy J White's Jan 24th 09 Toronto Star article entitled Dumps, A Window To The Past, and some of those folks were a little ticked off.

When Mike Duggan made the association he gasped, ‘Oh so you’re that Rob Campbell? I want to strangle you’, and then he proceeded to list all the mistakes in that story.

I listened patiently. Everything he said was true. And I know deep down they all wanted to like me - bottle collectors want young blood around to mentor and shame. Everything went very smoothly after I took out my wallet and officially joined the Four Seasons Bottle Collectors. I paid $25 to become one of them, for a year.

“I've built Dumpdiggers for you” I explained later, "and now I’ll donate time and energy to share this web enterprise and help the subculture. Look upon Dumpdiggers.com as Rob Campbell's contribution to the Four Season's Bottle Collecting fraternity. Send me any messages you want broadcast.'

After the monthly Business Report and the Treasurer's Update, the president Jamie McDougal once again brought the group's focus back to me, the new member. What did I collect? How can they help me? And that query put the focus squarely back onto Dumpdiggers and all the wonderful things an enterprise 2.0 interactive website can do to help grow a bottle club. It was determined then that I should speak on the subject at the upcoming bottle show - I agreed.

Anyway, I got yet another chance to illustrate Dumpdiggers.com functionality when Glenn Moorhouse revealed he was selling bundles of vintage club newsletters, full of unique information, for approx $25 dollars each. “Why not sell smaller downloads for five dollars each?” I interrupted. The process would be simple enough – scan the newsletters and then convert the files to pdfs. These are called ebooks, and they're a great way to share information and increase a customer base at the same time. IN this case it would be a great way for collectors all across Canada and the United States to access and consume the rare information, and the club could make a few bucks every month for doing nothing.

At halftime, the business portion of the Four Seasons Bottle Collectors meeting culminated in a dollar per ticket raffle for a mysterious prize. 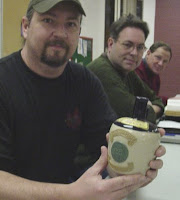 Darren Spindler won the draw. That was exciting. Carl Parsons stood up and presented Darren with an attractive old English whiskey jug. The pottery had a cobalt blue glaze top and looked rather fancy - but I don't think it was worth very much.

Here's Darren Spindler. He’s one of the people I most wanted to meet. His Early Canadian Bottle Works website has always impressed me. It's a nice clean website, simple and socially relevant at the same time. And the digging stories are terrific. I look forward to more cooperation with Darren in the future - maybe we'll even get together dig someday? 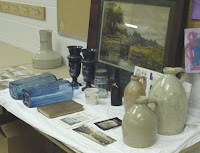 Then the gathering turned to Show and Tell – this month’s theme was “Things We Love”, and for the next hour it was easy to see the passion that unites these people. Darren Spindler stood up first and described the five different things he brought - the most interesting of which was a framed Griffin Bros promotional material (a go-with?).

Melissa Clare went next and showed us a hot watering can, and some tins emblazoned with white roses.

The president of the FSBC, Jamie McDougal followed Melissa and described his favourite things; assembled on the table before him was an amber Dahls Ink, a tiny Hudson’s Bay extract bottle (turning amethyst) and a vault light (luxfor - which is a piece of glass designed to transmit light into buildings), that captured everyone's attention. After some research, I found this page which explains vault lights.

Last to present at 9:45pm, Sean Murphy detailed his display. He held up some green glazed (undercoat) crocks and jugs from Peterborough Ontario, an aqua fruit sealer with the correct metal ring and top, and some spectacular yard sale finds including an original but unsigned water colour painting of some quality.

At the conclusion of my first meeting as a member of the Four Season Bottle Collectors club I promised to write about and help promote the upcoming 16th Annual Toronto Bottle & Antique Show and Sale – Canada’s Premier Bottle Show Sunday April 19th 2009, 9:30 am – 3:00 pm, Humber College Gymnasium, 250 Humber College Blvd. 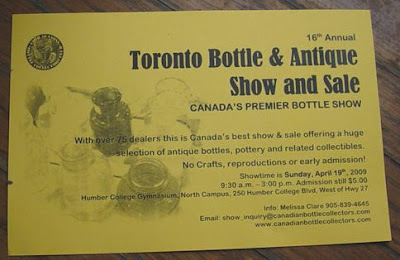 The History Detectives on PBS

Dumpdiggers love everything about The History Detectives television series on PBS. From the Elvis Costello soundtrack to the state of the art investigative science and technology, this show is a model for grade A infotainment.

The History Detectives concept is the logical extension of what I call 'object fantasy' and that's the precognitive notion that some diggers get when they pick up an item in the bottom of the hole and wonder, what pivotal role in history did this x play? Was this Wilfred Laurier's toothbrush? or perhaps those gin bottles were drained by Sir John A MacDonald? This kind of thinking is how the History Detectives came to exist. Imagine a temporal detective agency comprised of experts, with each member of the elite task force willing to put in the time, researching, digging in municipal archives, or doing chemical analysis in labs. Eventually these scholars determine the probability of truth.

So imagine my surprise when I opened my Dumpdiggers email yesterday and discovered that Amy R. Baroch the Sr. Project Manager at PBS Engage wrote Rob AT Dumpdiggers DOT com a letter asking for help spreading the message that her publicly funded enterprise is featuring History Detective, Tukufu Zuberi, as part of the ongoing blog series called “Five Good Questions.”

The series features a PBS celebrity or insider and asks visitors to send in questions to be answered the following week. The engage blog series is thrilled to have Tufuku as their feature this week, coinciding with a special episode of History Detectives next Monday, February 23 (9pm local time) dedicated to African-Americans’ impact on history and society.

Here's a chance for Dumpdiggers to ask any questions they want about American history, anthropology or what it’s like to explore and solve some of histories most fascinating mysteries, myths, and folklore. Twitter: amyPBS

Finally, the best thing about the History Detectives website on the PBS site, is the chapter on Investigative Techniques - here's a glimpse at their arsenal of tools and the processes by which they divine an artifact's true identity, point of origin and potential role in history.

Watch History Detectives Monday Nights at 9pm on PBS.
Posted by rob at 6:06 AM 5 comments: 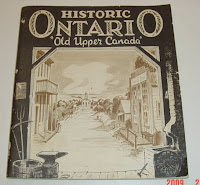 Yesterday, at the bottom of a dusty book bin in a cluttered Goodwill donation outlet, Dumpdiggers found a rare book! 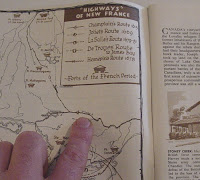 Prepared and distributed by the Canadian government, this 58 page booklet indexes the province's oldest attractions. Divided into historic regions, the book begins by outlining the Highways of New France.

After that introduction there's fifty eight pages of names, dates and facts beside Frank Fog's original pencil sketches of historic buildings presented as they would have appeared in their prime. Its chalk full of interesting stories and little known facts; I learned something on every page. For example did you know there's a cairn beside the Ottawa river near Green lake which commemorates the discovery of Samuel de Champlain's astrolabe? Lost in 1613 this relic was found 254 years later in the spring of 1867 by a farm boy named Edward Lee. He was swindled out of the prize by a steamboat captain... How old is this book? Unfortunately I can't find a publishing date anywhere, but inside the front cover there's a portrait of John Robarts, who became the 17th premier of Ontario in 1961 and served in that capacity until 1971.

The Historic Ontario book contrasts the settlements at the bottom of Yonge St with growing communities all the way north to Huronia, the capital of the Huron nation near present day Midland.

The book imagines the Battle of the Thames and briefly describes the death of Tecumseh. It pinpoints Crysler's Farm and describes the victory that Lt-Col J.W. Morrison and the British Canadians enjoyed over a superior American force.

There's four pages on the City of Kingston, old Fort Henry and the Murry Redoubt, which I discovered to be a 'Martello tower' in Macdonald Park that once helped protect shipping in Kingston's busy port.

How much is this prize worth? I have to know. Chalk full of valuable information and handsomely decorated with awesome architectural sketches by a Canadian artist named Frank Fog, I have put this find on eBay and confirm its value. Why not sell it? I've already read and digested the contents. If I don't sell this book on eBay now, I'll just end up giving it away for free or it will get chewed by Digger, or suffer water damage and or become blemished by coffee cup rings in my care... so I'll let someone else guard this treasure.
Posted by rob at 6:57 PM 5 comments: