A significant piece of American history found and acquired on eBay. 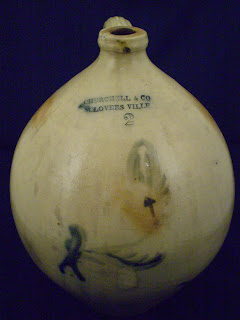 A veteran dumpdigger and all around wheeler dealer friend of ours wrote us a funny and informative holiday message telling us about early American pottery, and the treasures that sometimes appear on eBay. According to my pal, its possible to scour online auctions and acquire museum quality pottery, sculpture and fine art without paying anything close to a dealer’s prices or even what it’s worth – for a variety of reasons.

Knowledge, which comes from taking the time to do the research is key to prosperity in this line of work. By simply knowing a little more than the average buyer, my friend was able to score a really wonderful piece of early American pottery, and what’s even better – it’s a rare mistake. 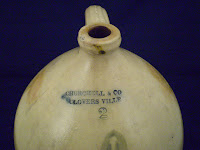 This salt-glazed stoneware jug was made by Israel Seymour in Troy, New York who made pottery between 1824 and 1850 in that area. It features a floral and feather design, the maker’s stamp is above an incised bird perched on a leaf with a small bird on its back. Like designs on many stoneware vessels made in New York in the early 19th century, the bird motif is done in cobalt, a metal oxide that does not lose its color in the heat of the kiln. This is a form of decoration long used in Central Europe.

The New York potters used cobalt imported from Europe, which was expensive, but only a little was needed to produce the characteristic strong blue colour. The motifs inscribed or painted on the surface have their origins in the European stoneware tradition, but American potters developed their own repertoire of designs that referred to their New World context; highly prized are patriotic subjects of the American eagle with the flag and arrows, and naval scenes depicting the War of 1812. Common subjects are birds, including recognizable species like pigeons, doves, peahens, sandpipers, and chickens, as well as others that are entirely fanciful. 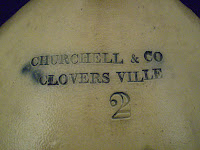 I. Seymour of Troy NY made a mistake when he was stamping this ovid jug. He wrote Cloversville NY which was wrong – there never was a Cloversville, but there was certainly a Churchill &Co from Gloversville. That man, and his dry goods firm, was a pillar in the community, and we found a lot of great information on him. So Mr. Seymour also misspelled his client's name. This potter had no attention to detail.

Churchill & Co Gloversville 2 Gallon Stoneware Jug was made by Israel Seymour of Troy New York in about 1829.  This jug was a special order from Henry Churchill for possibly celebrating the opening of the Post Office or for the naming of the village of Gloversville Ny. in 1929.  Henry Churchill must have been very disappointed when he received the Stoneware jugs that he purchased from Israel Seymour. Not only is his name misspelled, the jugs read "Churchell & Co - Clovers ville ". Many potters in North America could not read or spell. There are many examples of misspelled stoneware jugs and crocks found to date, and this one is a beauty.

Henry Churchill, son of Jesse and Catherine (Smith) Churchill, was born in Middletown, Connecticut, February 17, 1807, died September 3, 1868. Early in life he came with his parents to Broadalbin, Fulton county, New York. He was educated in the public schools. and at an early age was thrown upon his own resources, developing into a strong, self-reliant man. From his twelfth to his twentieth year he was engaged in mechanical employment and mercantile life. For several years he was clerk in a store in Albany, where he acquired a thorough knowledge of merchandising methods and principles. He then relocated to Gloversville, New York, where he opened a store and prospered. For several years Churchill's store was the only one in Gloversville; he was the first postmaster of Gloversville. In the year of financial disaster, 1840, by the unexpected and heavy failures of those to whom he had entrusted his means, he lost everything he had accumulated in his years of prosperity. He had, however, the confidence of his fellow townsmen and large advances were made to him which enabled him to again start in business. In a short time he had paid off all his indebtedness and was firmly established in a large and prosperous business. From this point his career was one of unbroken success. He bought a large tract of land then near but later in the very heart of Gloversville and almost entirely covered with buildings. It extended from what is now Pine street to the "Fork in the road," and in 1851 this was all planted in corn. When he had completed the plans for such a residence as he desired, he sent men into the woods, who cut the lumber required. In the middle of his growing cornfield (now South Main street, and the center of Gloversville) he began his foundations, proceeded with the erection of his house, into which he moved in 1860. The first meeting preliminary to the organization of the Fulton County Bank was held in this house and was attended by the McLarens, Judsons, Messrs. McNab, Wells, Carson and others, well-known citizens. When the organization was completed, Henry Churchill was elected its first president. He was also president of the board of trustees of Gloversville Seminary, and an efficient promoter of the interests of his village 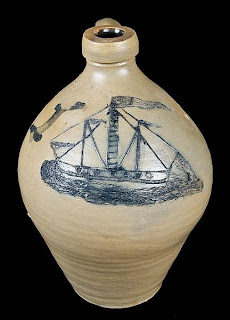 Between 1820 - 1850 many pottery shops sprang up along the Hudson River and along the New York State canal system making vessels of various shapes and sizes for the ships and shipping. During kiln firing, salt was applied to vessels that combined with clay silica to create a smooth, lustrous finish. Chocolate brown Albany Slip, named for where the clay was mined, was used to coat the insides of vessels. To identify or decorate the vessel, a painter applied a metallic oxide clay slip that turned a rich blue when fired. Sometimes manganese that turned purplish-brown was used. Simple identification included the makers’ mark and the vessel’s capacity. The New York History blog posted Dec 22 detailed donations to their State Museum from Adam Weitsman, along with photos including this piece showing a canal barge.

Salt glazed stoneware was vitally important to the development of New York State and its central role in western expansion of the country via the Hudson River, the Erie Canal and its network of feeder canals, and through the Great Lakes to the western river systems. Stoneware vessels were in high demand for storage and preservation of drinking water, milk, butter, eggs, beer, ale, whisky, pickles and salted meat. Clay deposits ideal for making stoneware were found in what is now South Amboy, New Jersey, lower Manhattan and eastern Long Island. As a result, New York State became a large stoneware producer.

Back in around 1829 the nearest pottery co. to Gloversville was in Troy NY. and that was about 50 miles away. After checking the potters of Troy NY, we found that I. Seymour's pottery number ( 2 ) stamp on his jugs was the same on all the 2 gallon jugs he produced. All potters had their own pottery stamp made with their name on it. It was basically a wood block with a handle and metal type face attached to the block. This was perhaps a rare attempt at making advertising for someone else on an order of stoneware jugs. And it went horribly wrong. This certainly could not have been a great transaction between Henry Churchill and Israel Seymour. It must have been an embarrassment to both great men.
Posted by rob at 5:11 PM No comments: