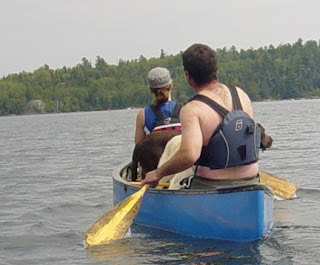 The smell of fresh cooked pork sausages filled the air as we loaded our provisions into two canoes alongside the long wooden pier at . The four of us had already drove half an hour west from Kenora, through an unkempt Indian reservation named Rat Portage, to the north east corner of the Lake of the Woods - it would be another hour or more before we stopped for anything to eat.

On this particular Saturday afternoon the world was bright and alive with the sound of children’s voices, dogs barking, and the ubiquitous hum of motor boat engines. None of us could fathom that our adventure would leave the land of living and descend into the darkness of the dead. There's no cell service on Lake of the Woods, and we travelled back in time as we paddled across

This is a true account of how we came to hear the ghostly voices of four dead miners at the bottom of the Number Two shaft on . 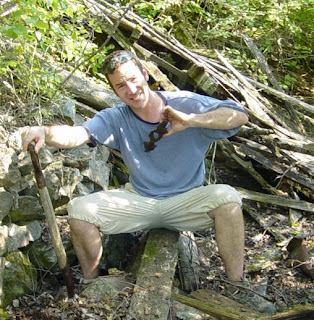 I'm Rob Campbell and I led the expedition to uncover the history, and search for valuable relics in the bowels of . This is the story of a forgotten gold mine, and one that’s not completely abandoned. Accompanied by Trixie Blasé, Jasmine Edu and Chester Huff (and two four legged friends, Theo and Poncho) my intrepid crew or fortune hunters set out with the best intentions.
The plan was simple – by canoes it would take us forty minutes to cross the bay. We planned to explore all afternoon and then return before sunset. It was our objective to find the lost gold mine and rummage around through the remains of some of the original buildings. Trixie and I have been trained by the very best dumpdiggers on how to dig century old foundations to find important relics… It’s important to remember, this mission started as a treasure hunt, not a séance. 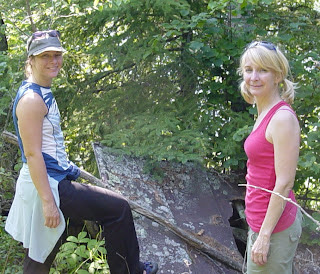 Sultana is one of the most famous gold mines on the . The original claim was staked in November 1888 by Henry Bulmer, who sold the 27 acre property to a group of fifteen men who called themselves the Ontario Mining Company. This group, who did not even bother to register the claim, hired a prospector and a mining engineer from to assay their purchase. Unfortunately this ‘expert’ wrote an adverse report in the summer of 1889 and because of this document a third party named John F. Caldwell of managed to pick up the claim for a very reasonable price. He ignored the expert. He had visited the site himself and truly believed there was gold in the greenbelt quartz - he was right. 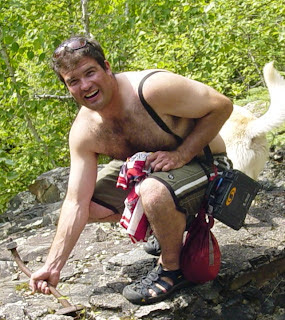 Mining operations commenced in the summer of 1892 when three small veins were discovered in the rock. must have found enormous profit in his first six months as he soon spent $30,000 erecting a five stamp mill on the island. This was a steam powered machine that crushed quartz to release gold nuggets from the ore. The machinery was imported from and its assembly was completed just before Christmas. The stamps weighed 850 lbs each and were dropped eight inches 92 times a minute in the standard order, namely 1,5,2,4,3.
When we arrived at Sultana we found the sandy beach deserted of all life and the shore absolutely full of driftwood. It was a Beachcomber’s paradise. Beyond the dunes there was long grass and a dense forest that obscured all signs of any previous development. Just beyond the trees we encountered a crumbling rock wall holding back a mass of rusty barrels that was bisected by a narrow trail that snaked its way up a steep incline. A set of stairs had been cut right into the rock. 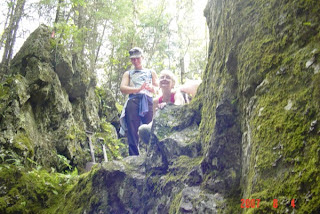 found a small chunk of dark red ore buried in the soil here – a crumb of some really heavy metallic mineral. When I dug down into the rocky soil I dredged up barrel hoops and bucket handles, thick square nails, and rusty hinges… There was corrugated steel roofing lying in the grass beside the trail - this was all that remained of some structure no doubt integral to the operation of the mine.
As we continued walking up the rise the rest of the island came into view. At the top of the hill we each stared open mouthed at a century old rock cut that was the throat of the number two shaft. In the jaws of this stone cavity we could see moss covered timbers set right into the rock. At one time these tree trunks had supported a sturdy platform on which miners might have worked the hoists. At one point I threw a stone down into the darkness and we listened as it ricocheted off the sides of the passage - we waited almost fifteen seconds to hear the splash. 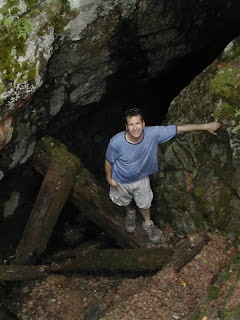 Unaware of any danger I climbed down the rock wall to stand on the bed of timbers. Immediately I felt a blast of very cold air rising from the cave – although it was the heat of the summer there was still plenty of ice down there in the darkness. Trixie was the first to hear it – dripping water echoed up the shaft and between each drip there were other sounds, less natural.
In December 1899 sold the mine – he’d made his fortune and was probably aware that further mining would not produce more bullion than he’d already liberated from the island. The new owners kept the staff; 12 miners, 1 blacksmith, 5 mill men, and 2 cooks were each employed at $3.00 day. The Sultana mine had been very profitable for many years and the new management was eager to maintain production – too eager.
When the gold seams faded away into the rock a few months later the organization hired explosive experts and ferried a mass of low grade dynamite to the site. As the TNT was lowered down into the pit there was an accident. History doesn’t record exactly what happened, but it does detail the deaths of four miners in 1901. Two men were buried in the rock at the bottom of the tunnel - it took a week’s digging to recover the bodies. Those are the two spirits who cries forever resonate in the darkness of the mine. 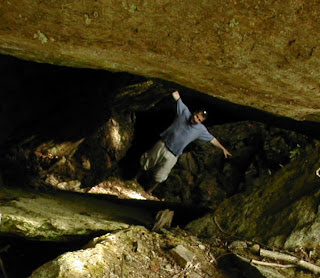 Trixie bade us all to shut up and listen. Just for a moment, as I peered into the darkness of the abyss I could hear the rope squeaking and then I too heard the faint echo of human voices… it sounded like two men whispering soft warnings to each other… The air grew even colder as their voices grew louder and every member of the expedition was paralyzed with fear – we slowly backed away from the rock cut and then quickly ran down the hill and back to the boats. It was seriously scary stuff – fear pervaded our very beings and it wasn’t until we were back in our canoes and well away from shore that we could discuss the experience. We laughed about it then, but I think it’s safe to say that each of us was overcome with fear.
When I researched the mine at the in Kenora, I learned that although the Sultana property was worked off and on for another thirty years it was never as productive as it was before the accident. And it was riff with very spooky incidents that speak of supernatural phenomenon; on two occasions there were dynamite boxes mysteriously emptied of all explosive material before they could be deployed. Equipment was found broken at the bottom of the pit and many new miners reported hearing voices calling out to them, begging for help. When I read that a cold shiver climbed up my spine; I had been there and had heard those voices myself.
Posted by rob at 3:48 AM

Labels: ghost, haunted gold mine, Lake of the Woods, Sultana

I too was there today with a freind and we repelled down inomto the shaft an happenwd to hear voices as well but kept on any ways :/ but for sure some history there an u can see it an feel it . Well worth the trip :)

I believe what you were hearing was your own ghosts. They came back from the future to warn you away from these locations.

real interesting... found this when researching a Sultana property in the Sudbury region where Chicago based mining investors ( Travers ) had gone to exploit a mine in Drury township in the 1890's. Wonder if the Chicago equipment connected to the Travers ?