While excavating the property at 510 King St East in Toronto, workers discovered a lost creek which was heaped with trash - some of which is now treasure. 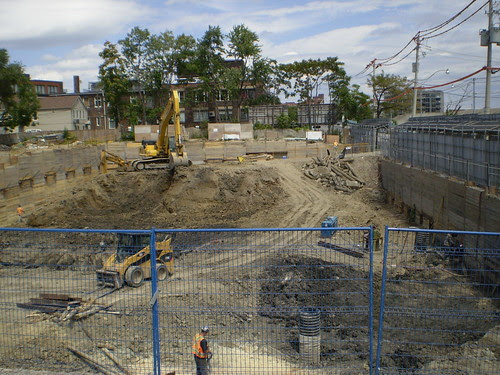 Recently Dumpdiggers admin were treated to a fascinating account of valuable antique glass bottles and early Canadian pottery being recovered from construction site in downtown Toronto. The building project at 512 King St E is owned by a hip property developer called Streetcar. The site is located on the north side of King St. at River St which almost as far east on King as you can go – its opposite St Lawrence street which is the north western extremity of the massive River City condominium development.

By comparison, the relatively small 'Streetcar condos' building project on the north side of King St is well under way, and will probably be completed by the summer of 2011. But back when this property was still being excavated, in July 2010, the developers found plenty of evidence of a small creek that ran above ground here, up until the early 1880s. This creek was yet another tributary of the mighty Don River that was buried by man before the turn of the century.

Evidence of a lost creek under Toronto

The old glass jars and cream coloured stoneware beers floating on the top of the puddle at the bottom of the excavation are all that remains of a centuries old dump site that served industrial age Toronto. You can see the water is being sucked out of the hole by sump pumps. When these photos were taken, the spring water was drained into the storm sewers on the south side of the property and bottles were popping up all over the place. The construction site manager was very helpful and accommodating, and was himself an expert in the history of the site. He shied away from my camera of course; posing for pictures on a job site can be risky. But to his credit, he was very forthcoming with good information. ‘The creek has no name' he said in provocative tone, and his words echo in my thoughts. 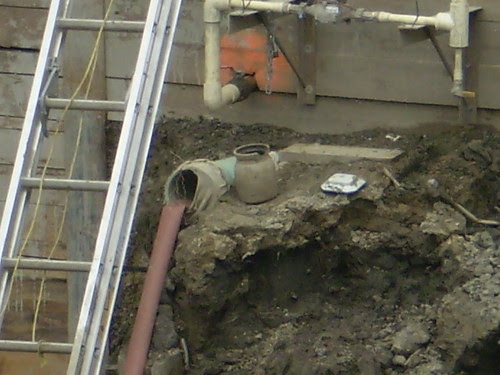 While pointing outside from behind his comfortable desk in the heated office trailer, he told me how the north facing wall of the excavation, and now the building's foundation is engineered with specific water collecting apparatus to channel the accumulation into nearby municipal storm sewers. 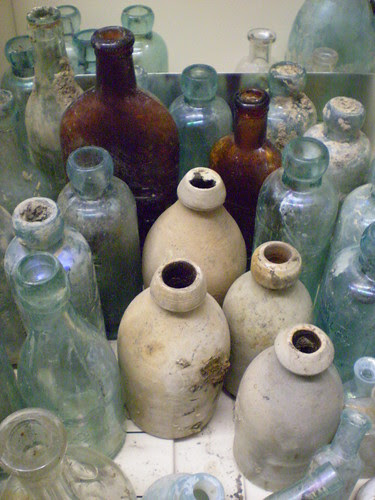 A good storyteller, the construction site manager recounted the hot July days when the backhoe operator dredged out several tones of metal debris that had been dumped and incinerated over a hundred years ago. Back then the natural water system was deliberately buried under the heaviest man-made materials available; industrial age iron scraps, building stones, broken bricks and cement was dumped here to suffocate the spring. The refuse also contained wagon loads of hundred year old household trash. The rubbish was incinerated in keeping with period legislation about dump maintenance with respect to hygiene, so only the strongest, luckiest bottles survived.

The Dumpdiggers reader who contributed information to this story reported that this Q.S Grainger stoneware beer bottle came from this dig site. It was hand-turned on a pottery wheel by an unknown local potter in the 1880s. There are only a few remaining with this stamp, and every specimen is unique. He also wrote that, "There was an assortment of Toronto blob top pint & quart soda water bottles, many medicine bottles from Canada & USA, glass & stoneware, ink bottles, stoneware jars & pottery items. There was even one amber & one aqua glass fire grenade bottles! A few pot lids from the UK. A total of about 300 blown bottles that date from 1870 to 1905. This lot had a creek running from north to south of the property and it was filled in through many years with ashes. Mixed in the ash were numerous bottles. The workers only picked up the embossed bottles that were worth money and left the unembossed ones that were not worth someones time to clean."

Origins of the lost creek and its path to the Don River, 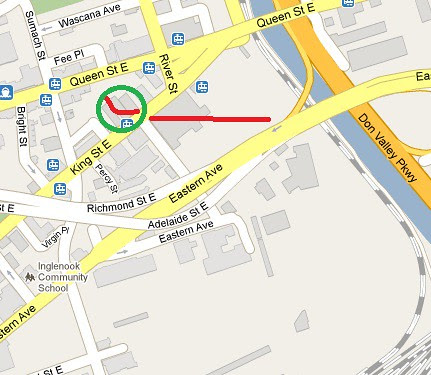 The lost creek originates from a natural spring just north of the excavation site. In the 1880s it was on the surface and ran south through this property and what is now the River City condo developments property, the future site of the Pan American games in 2014. 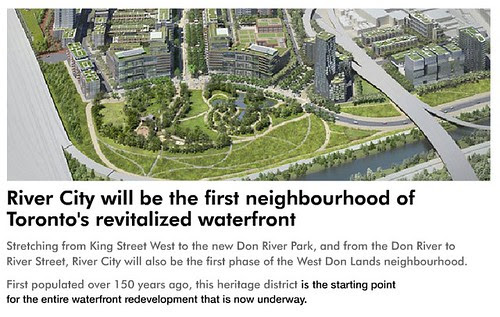 The lost creek fed into the Don River.
The Don River Straightening Project helped Toronto become a better city, but it also created rich pockets of good historic trash for Toronto diggers to unearth for centuries to come. Let me tell you a story about the Don River in Toronto in the late 1800s. The people of this great city have had a love / hate relationship with the Don since the origins of the British settlement in the 1790s. 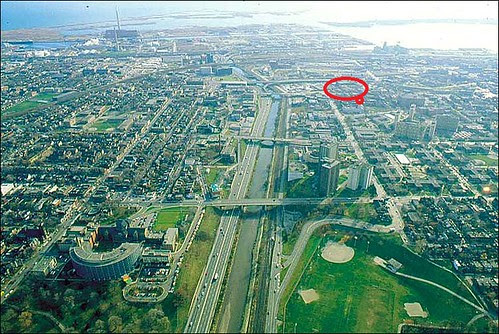 One hundred years later, desperate to stop the flooding, and to provide a shipping channel and to create additional industrial land near the lake, a vast scheme known as "the Don Improvement" was carried out in Toronto. The project straightened the river south of Gerrard St to make room on either side for railroads, roads and other urban infrastructure. Ashbridge's Marsh was drained and filled, eliminating a public health concern, while providing acres of new industrial land in the Port Lands. The expansion of the city in the early 1900 buried the last traces of the creek that once ran across 512 and 510 King St East.

Are these posts the remnants of a small bridge? 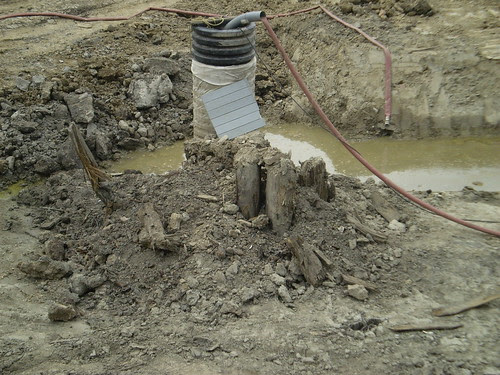 As you can see, wooden posts were visible at the bottom of the hole. Let me remind you that the bottom of the hole was almost ten feet below the surface of present day King St East. Were these wooden posts part of a small bridge across the lost creek? Picture that if you can, and its easy to see residents walking and talking... No doubt some of the antique glass soda bottles were discarded by the users themselves immediately after consuming the contents. Soda bottles are exactly the kind of rubbish that get's pitched by hand, while the milk bottles and medicines are more typical of a systematic municipal trash disposal program at the site.

One of the best bottles that was recovered was this amber Warner's Safe Cure which was a popular patent medicine. Because it has the names of three cities embossed in the glass, its what's known today as a 3 city Safe Cure.

3 CITY NERVINE 1/2 PINT 1889
WARNER’S ~ SAFE ~ NERVINE ~ LONDON - ENGLAND (LEFT SIDE) TORONTO - CANADA (RIGHT SIDE)~ ROCHESTER ~ N.Y. U.S.A. HALF PINT, AMBER, DC. This bottle's value is approximately $500 as per the Werner's Reference Guide blogspot. The website is definitely worth perusing if you have any Warner bottles in your collection.

Another excellent source of information on Warner Patent Medicine bottles is the Warner's Safe Cure Blog which is the product of a skilled writer that lives his passion for this specific type of antique glass. I've just spent three hours reading sixty posts on his site.
Posted by rob at 9:55 AM 6 comments: