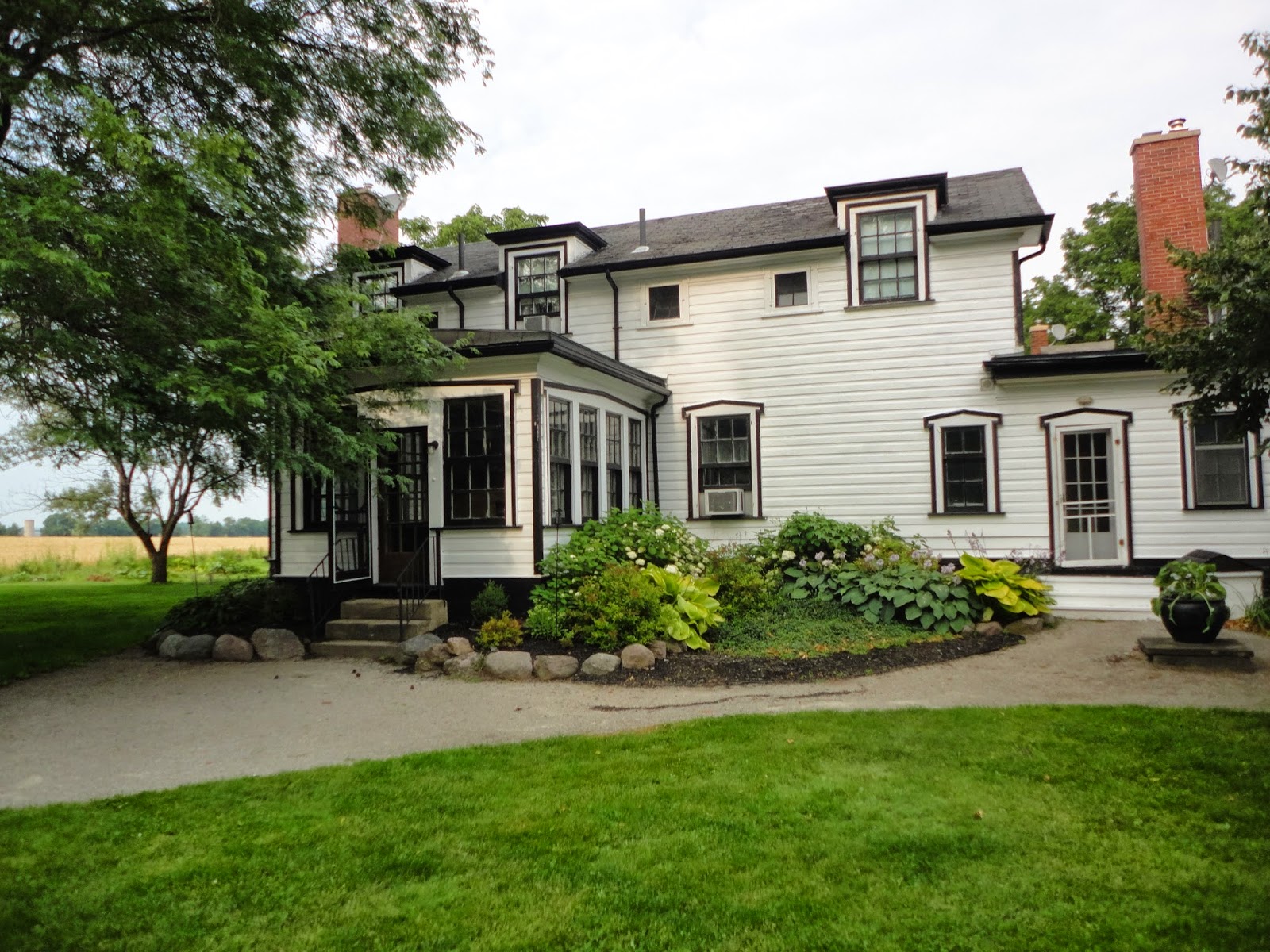 On the August 2014 long weekend, myself and a couple other incorrigible dumpdiggers trekked north to Alliston Bed and Breakfast, Stevenson Farms, 5923 King Street North (County Rd. 15) Alliston, Ontario to enjoy a relaxing evening BBQ under the stars.

Owned and operated by Stephen and Susanne  Milne, our friends from twenty years ago, the pair are now successful innkeepers and spa workers at their own Harvest Spa.

Although this property is immaculately preserved, it contains all manner of Dumpdigger curiosities waiting to be discovered.

Stephen is a budding antiques collector himself, grabbing up odds and ends at sales, he's got some great stuff. Stephen Milne is glimpsed below playing a century old pump organ, which crowns a banquet hall filled with timeless reminders of another age. 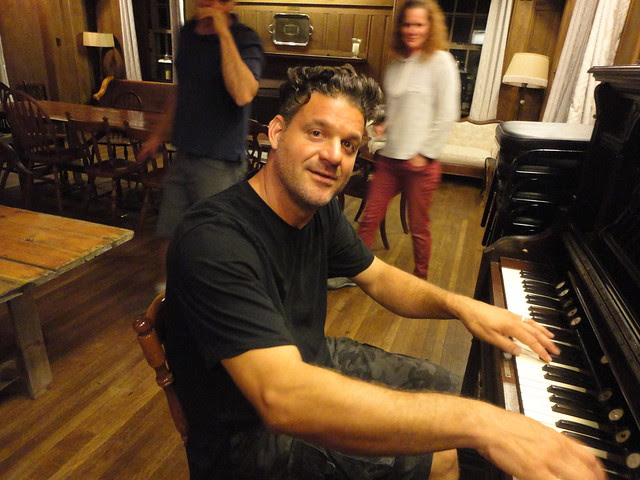 The History of Stevenson Farms is so impressive they even have their own historic plaque! The metallic storyboard shown below (click the picture it expands!) reveals how in 1832, William Stevenson and his young wife Elizabeth Pringle settled on these lands having come from the Edinburgh Scotland the same year.

Their original log home was replaced in 1850 by a 12 room frame house which was was later renovated in 1927 by their illustrious grandson Theodore Loblaw; the founder of the Loblaw grocery chain. The house became a seasonal family retreat for Loblaw family, and boasted some of the finest amenities of the area including over 16 bedrooms, 15 bathrooms, 3 sun porches, and large wood paneled billiard and banquet halls.

The farm also had one of the area’s first golf and country clubs, The Stevenson Memorial Golf Club, as well as tennis courts. After Loblaws untimely death in 1933 - the estate was purchased by William J. Wood who ran a successful dairy and livestock farm which employed the old barn that can still be seen at the back edge of the car park. The farm has since passed down through the family to its current owners - Stephen Milne is the the thrice great grandson of the Stevensons. 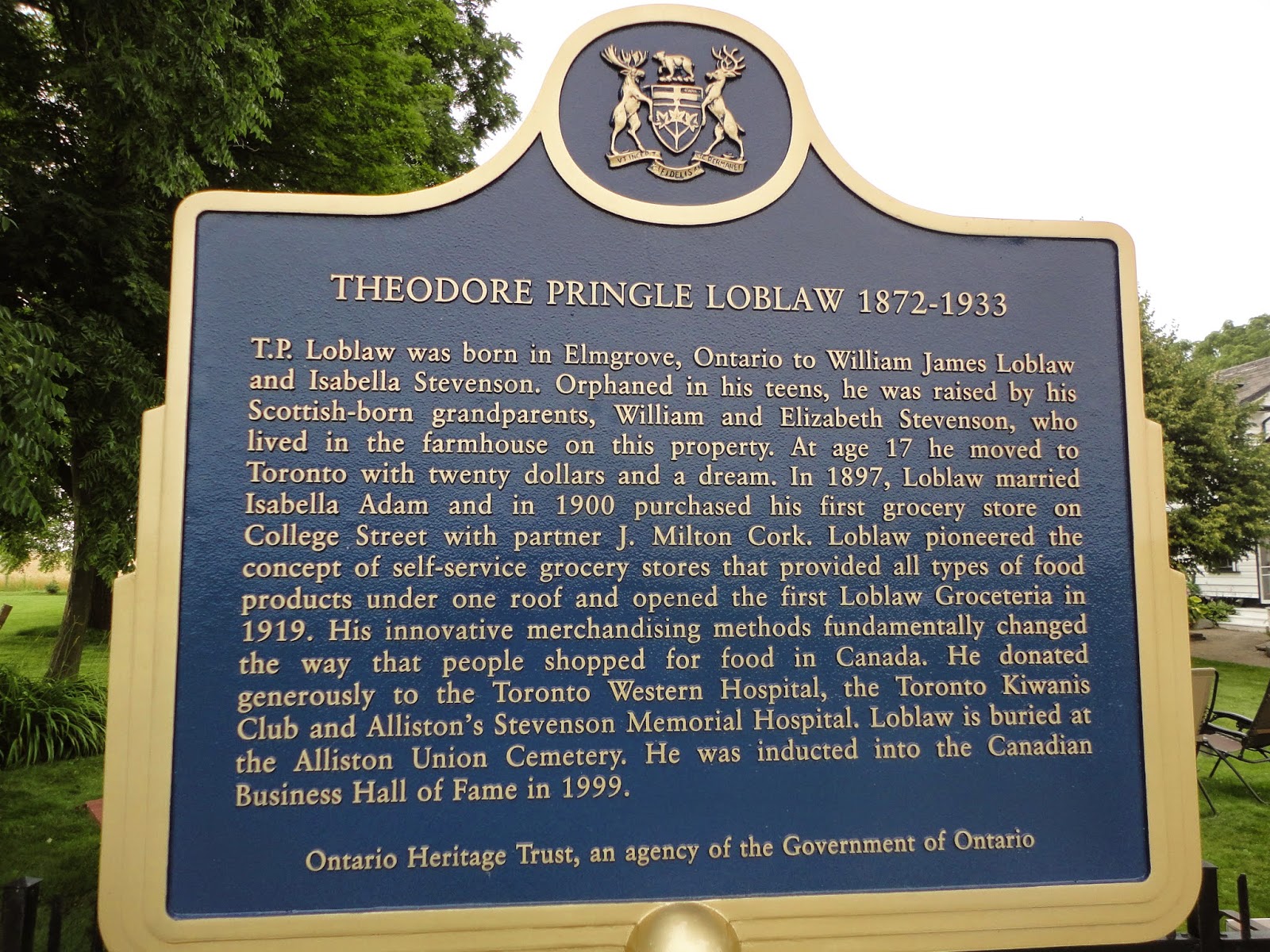 Steve gave us a tour of the property and I found myself snapping pictures of the furnishing and collectible knickknacks. 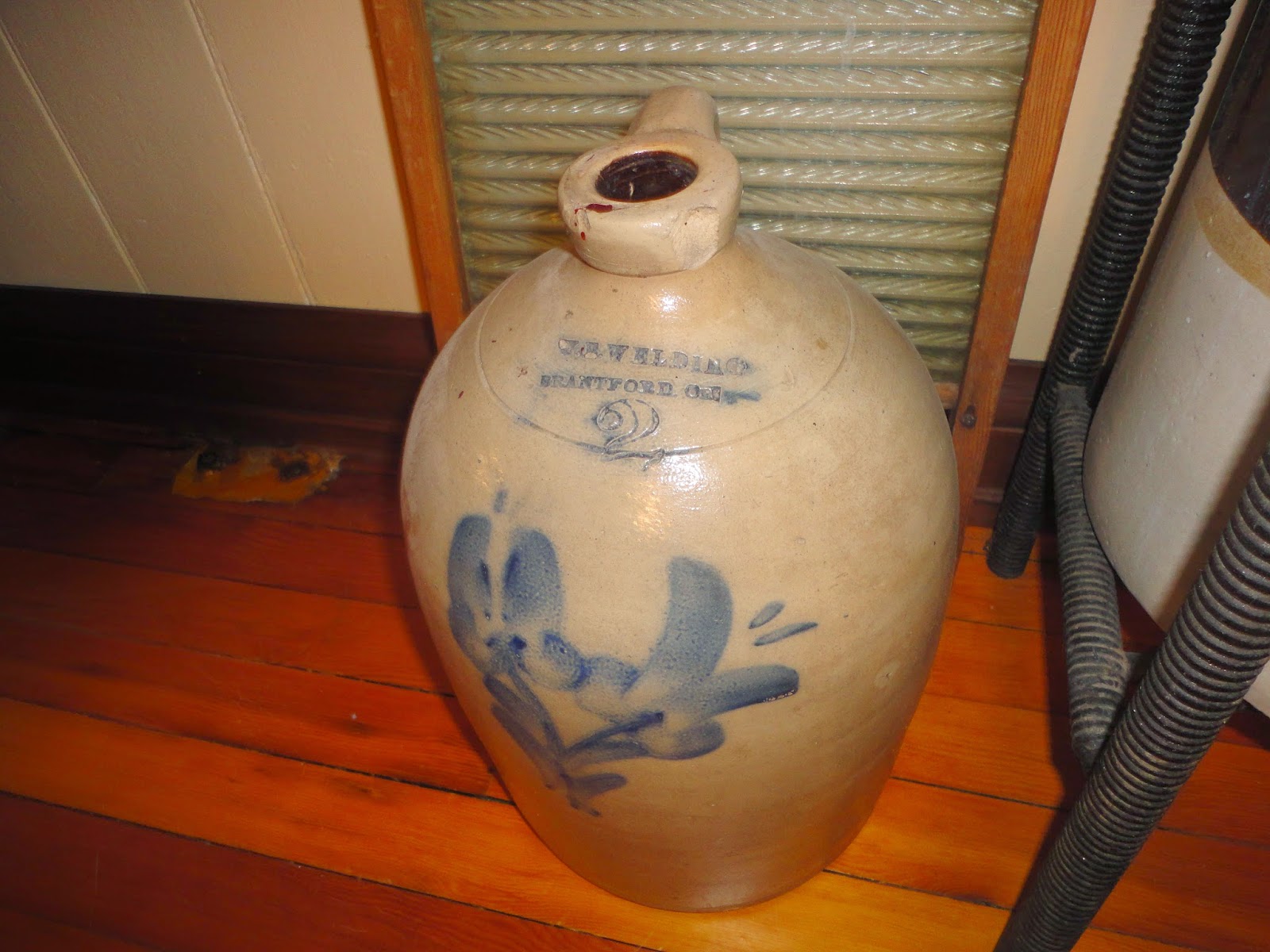 Here's a salt glazed stoneware jug, J.A Welding Brantford pottery that has the signature cobalt blue glazed flower signature emblem of this historic potter. The valuable jug would sell at auction for approx $500 today, but is certainly worth holding on to for posterity as there are only a few hundred of these pieces left in circulation.  Photographed above, the 2 gallon finger jug rests on a wide window ledge in the hallway of the reading room, and as we passed its position in the busy house I wondered about its chances of it surviving another hundred and fifty years here in this busy place ...?


I explored the wreck of an old dairy barn on the property at sunset.

After we got settled into the place, I noticed one of Steve's neighbours is tearing down the old barn at the edge of the backyard that must have certainly have belonged to the Stevenson Farms property at one time.  Unsupervised, I put on my hat and boots and decided to go exploring .. 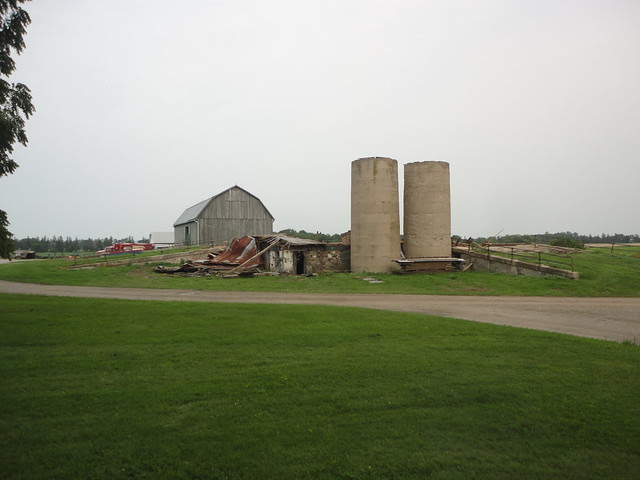 I know a lot about how to hunt for antiques and forgotten treasures found in broken down barns and old farm buildings, but this place was beyond any low energy scavenging. It was too far gone! 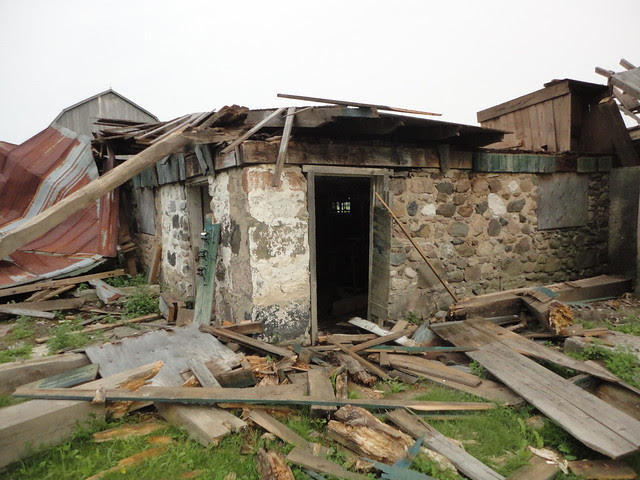 It looks like the majority of the barn boards and beams have already been recovered. Next someone will come along and reap the rusty sheet metal roof - when scrap prices rise again in the fall?  If I had the energy i could have combed the interior and peered atop the stone walls. Where the short stone walls end, and the wooden beams of the ceiling begin are cubby holes that inevitably yield a treasure trove of medicines, whisky flasks, beers and sometimes even cobalt blue poison bottles.  But this barn was really wrecked... 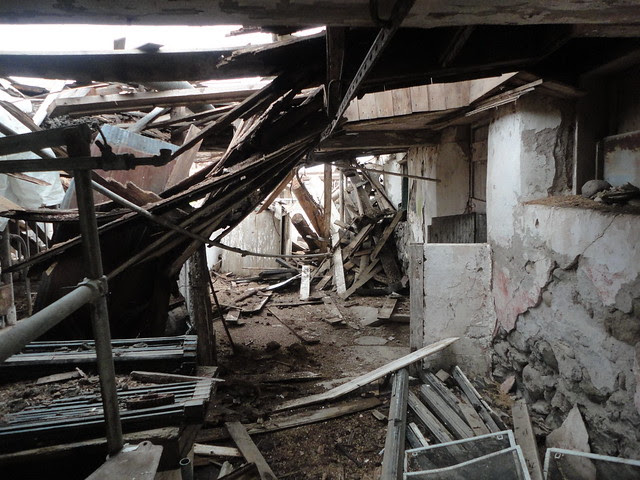 Its conceivable that Theodore Loblaw milked cows in this parlour at one time, and perhaps he sold his fresh milk at the local 'Groceteria' that started his phenominal rise to success,

The Loblaw Groceterias - in the year 1919 Theodore Pringle Loblaw and J. Milton Cork opened the first Loblaw Groceterias in Toronto. They had a new idea for grocery retailing that combined self-serve and cash-and-carry. No longer would their customers have to wait for an overworked clerk to fetch items from behind a store counter (like in those movies of the old west Dry Goods stores where the settler had an account). Within a decade, the Loblaw chain had grown to over 70 stores!


Back at the house I continued exploring and treasure hunting,

In a backroom of the original farmhouse I found what Im sure would be the heart of the Stevenson Farms Dumpdiggers episode. I uncovered the most precious merchandise that the visiting Antique Hunters and Canadian Pickers would gleefully cart away in their trucks. Behold this decrepit old couch, with its ornate carved wooden arms and (torn) crush velvet upholstery is still a valuable piece today, and one can imagine how it must have been the centerpiece of the parlour here in this historic property at one time.

The ceramic Findlay 'Super - Oval' stove is probably worth even more money than the couch.  I reckon it was used here in this farmhouse kitchen, or perhaps a 'back kitchen' or summer kitchen for years, only to be replaced about thirty years ago and regulated to storage by property managers too frugal to actually throw it away. 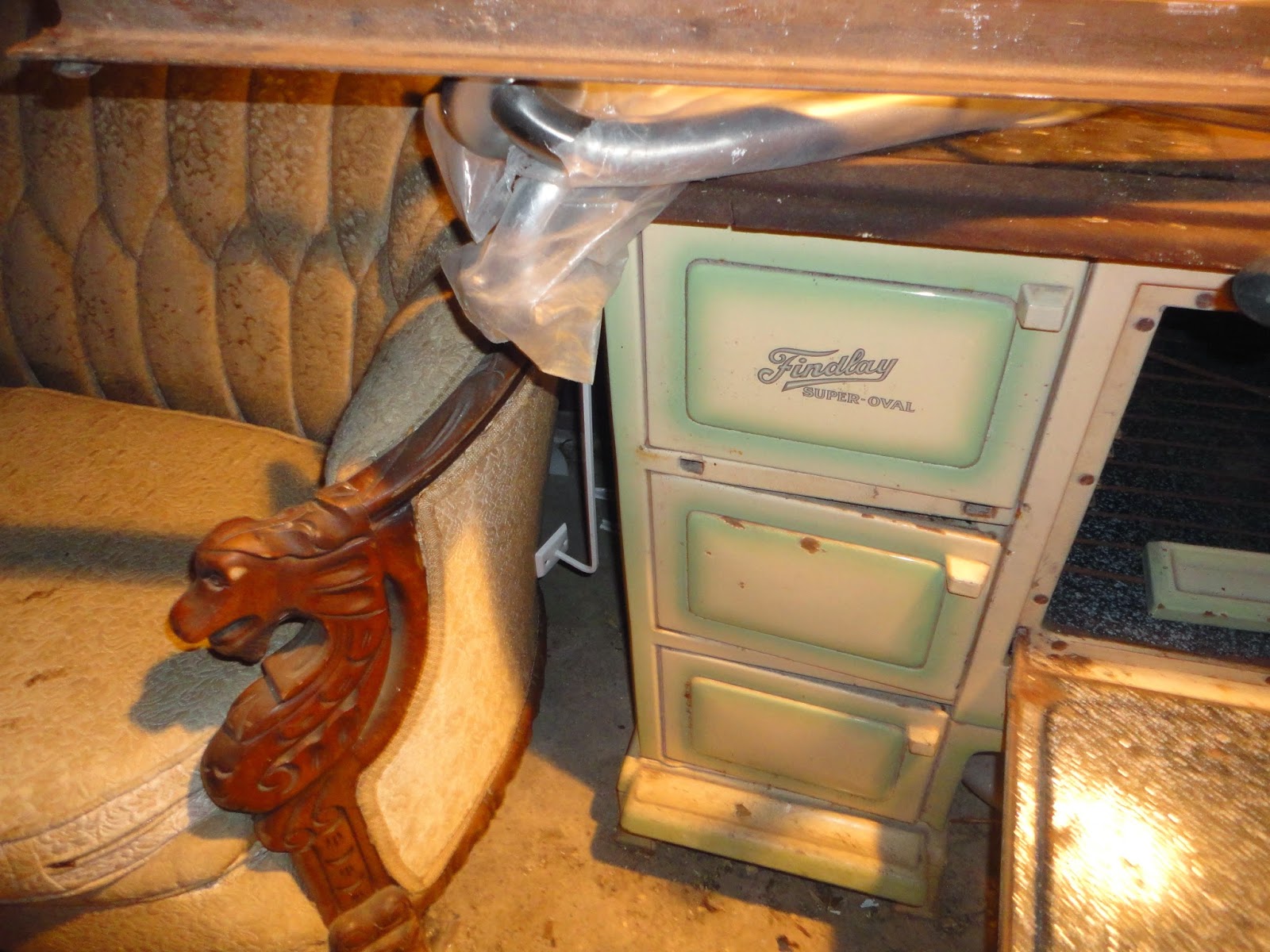 These items have been sitting here in the back shed under wraps for almost three decades now, and they are still waiting here today for a TV scout to log them so they can be properly discovered on camera. Would you like to make an offer?
Posted by rob at 6:28 AM No comments: