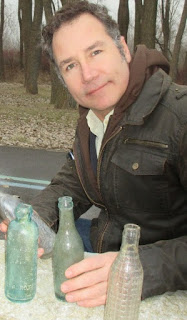 So I bought some antique glass bottles...

I paid $60 cash for three nice pieces of glass.

The transaction occurred at twelve noon on Tuesday 26th January 2016 in the Cherry Beach parking area on the rocks beside the bike path.  I didn't know what I was going to buy when I agreed to the meeting...

The real story here is who sold me these bottles, and how this professional person happened to have them, and how many more valuable bottles he has to sell... ?  I know he's packing some old milks and druggist bottles.

Meet Stephen Brown, an equipment operator at Green Soils on Unwin Ave in Toronto... And now a budding bottle collector. 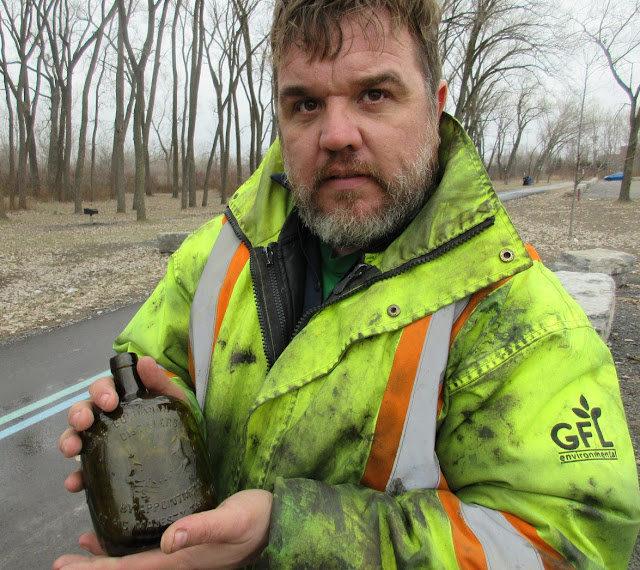 Stephen works at this place you see below (click the picture it expands) and before we go any farther with what I got from him, we have to discuss this unusual source... 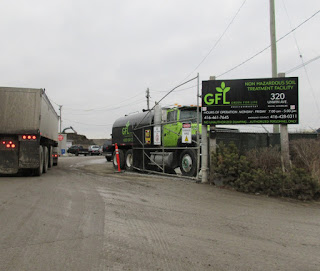 Green Soils is a soil remediation service whose business function is summarized in this March 2012 Globe & Mail article, Green Soils gets contract to clean up Port Lands excavations from which I will quote the pertinent details,


...Over the next decade, Waterfront Toronto expects to excavate two million cubic metres of contaminated soil and bring in another million of clean fill as the agency and its developers begin to revitalize the Port Lands

And there are insights into how it works,

"... facility currently cleans soil contaminated with fuels using a “bioremediation” technique that involves spraying dirt with bacterial compounds that can digest hydrocarbons." but the article goes on to say that no facility in the GTA is licensed to treat soils with metal residue.  So what about soils that are filled with antique glass bottles?

On the GFL website you'll find, ...  GFL Liquid Waste Division effectively destroys petroleum hydrocarbons such that all soil will be rehabilitated for re-use as top soil or fill at agricultural, residential and/or commercial/industrial properties. Unlike treatment systems involving thermal or chemical processes, biological systems do not involve significant energy inputs, nor result in the sterilization of the soil. 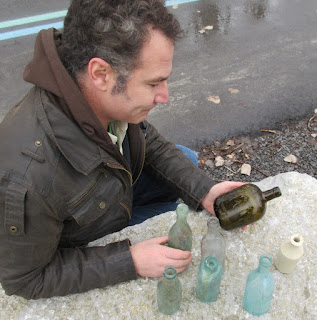 As some readers may remember, Dumpdiggers has visited in person a handful of downtown Toronto construction sites. We've bought bottles at the gate in historic places such as where the old schooner was discovered at Bathurst and Lakeshore, and at what was once Rees Wharf and is now Southcore Financial on Bremner, and on the eastern Lakeshore by Cherry St.  In writing each of those posts I watched the trucks taking away the dump and wondered about the fate of the bottles hidden in the fill. Thousands of antique glass bottles and early Canadian stoneware jugs and crocks were being unknowingly unearthed and unwittingly discarded.  The valuable pieces are excavated from what used to be the Toronto lake bottom and which is the parking garage of these condo tower sites. The artifacts, so many they certainly depress the market anyway, are shipped away to parts unknown and dumped deep under a mountain of other 'safer' dirt.  So even if the piece was to be found this century or next century it would have no historical context having been displaced from its original dump site so efficiently with modern equipment.

I knew about Green Soils from Abel DaSilva who had approached them with an antiques salvage operation in mind but whom I'm sure had been ignored by senior staff with no agenda for social or cultural charity beyond protecting the environment - which they are already doing everyday. 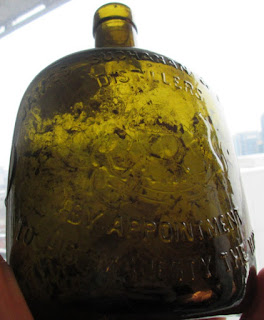 So it was a nice surprise to get Stephen Brown's email and we met shortly thereafter in some secrecy near the bike trail north of the parking lot at Cherry Beach.

I would like to know if this bottle is Canadian? And was it filled in Toronto at Gooderham & Worts? Or was this bottle made in England and shipped full of whisky from the Old World?  Either way I have already been told by s certain someone I know that this bottle is 'junk'.  Even if and when its all cleaned up, its near worthless, except as a window bottle.

Among the Toronto bottles for sale, I found an unusual John O Conner crown top squat soda. This vessel doesn't follow the later crown top label configuration seen on the link below - the slug is old style  John O’Connor / Trade Mark / Toronto
Also, this size and label configuration does not appear on this list of early Canadian soda water bottles under John O Conner.

On the bottom there is another star with accentuated points - bumps on the glass.

John O Conner had trademarked a five pointed star logo which is the same one adopted by the USA on their flags. It's hard to imagine what the star symbol meant to him, and what it meant to the general public in the late 1800s. Most likely it symbolized an individual liberty - the star being on the flag of the USA.

According to Glen C. Philipps’ reference book, Ontario soda water manufacturers and brewers gazetteer business directory, this firm was only in business from 1892 up until 1894. ?

If you know anything about this bottle I'd appreciate your insights in the comments. 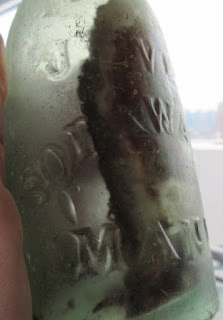 I'd heard about the '1862' J Eves Soda Water bottle for many years, and so when I saw it there I knew I had to buy it. Legend has it that Steve Redmon 'the Professor' found some of these in aqua in the old Rosedale Valley dumps. Tim explained that the Eves bottle is found all over Ontario because of his association with the railroads. And I learned by reading the story linked below that he made soda water in three different markets, Kingston. Toronto and London Ontario.

Canadian bottle collectors who are familiar with the history of James Eves know that he was a bottler of soda water in Toronto during the 1860s. The records show that in 1862 Mr. Eves set up his business at 7 Ontario Street (near King) in Toronto C.W. It is from this location that Mr. Eves undoubtedly ordered his first batch of bottles that are now known as the "1862 Eves" squat soda. The front of this style of bottle is embossed: J. EVES / SODA WATER / MANR and the back is embossed: THIS BOTTLE / IS NEVER SOLD / 1862.

For the longest time I puzzled over what MANR could possibly mean, but now I see plain as day that its short for 'Manufacturer' which would indeed be hard to fit on a soda bottle. I also must pause to reflect on that... Whisky is distilled, wine is vinted, beer is brewed and soda water is ... manufactured?  So carbonating water to make if effervesce was in their minds, (and in the minds of the consumer) still very much a manufacturing process. 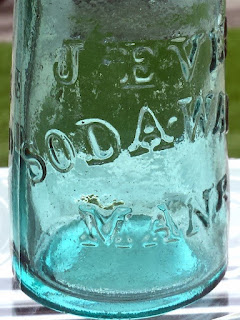 To the right is what my bottle would look like if it was aqua glass, and minty clean. This is a bottle that Abel DaSilva (YorkGinger) sold on eBay for $216.50CAN  that was the final price Jule\y 2015. If you search Eves Soda Water its the first thing to come up today. 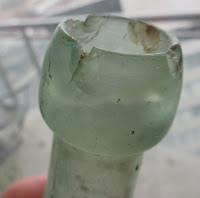 If I were selling the Eve's bottle, which I am not, then I could not expect even half that price as I have a less desirable shade of glass, and there is damage to the top of my bottle. The vessel I have is very dirty with stuck on dirt inside the bottle under the label - it would require cleanig and tumbling probably just as much money again to repair the top which would from that point forward always have to remind buyers that it has been 'REPAIRED.  So... sad to say unless I do it myself its really not worth it.

But who knows what else Mr Stephen Brown will find while doing his job?  Let this post herald this man's grand debut into Canadian bottle collecting. Look for him at the show in April.
Posted by rob at 4:25 PM 3 comments: