The morning of 12 June 2010 appeared grey and overcast. Perfect for digging bottles. The Saturday had been set aside by Dumpdiggers all over the city, earmarked as a day of discovery in the Four Seasons Bottle Collectors 2010 'Club Dig'. The secret location was an old dump in the heart of the city of Toronto.

Old and new diggers gathered together to make the trip. The story is recorded in excruciating detail in a story entitled Digging Bottles with The Four Seasons Bottle Collectors in Toronto. 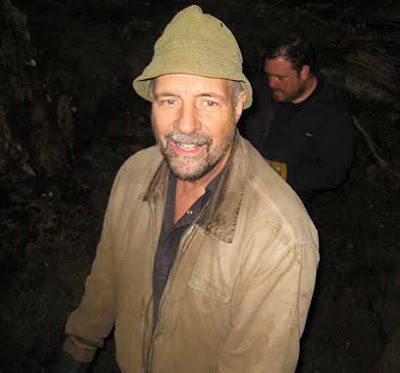 Carl Parsons is a storyteller and venerated member of the FSBC. He's been an antique dealer specializing in Canadian glass bottles for over thirty years and he knows his way around a couple hundred old dumps in Ontario. He led the tour down into the day's dig site and alongside 'Indian" Al Pothier they selected the exact spot based on shade more than anything else... nobody could remember if the exact spot in this site had been dug before, as the dump is one of the oldest in the city, and the terrain is constantly changing.

The crew got busy right away and dug out a large hole. The soil was soft and light, a gentle mixture of sand and ash with fragments of dump - broken china and bits of brick were visible on the shovels.

Tex and Mac were the new diggers and they worked hard sinking the hole down to a six foot depth. Then the guys got busy with hand trowels and garden forks. Carl put on a demonstration to show how he often uses a hoe with holes cut in the blade (to let water out), but today's dump was dry as a bone. The hole wasnt very deep, about six feet from surface, when Al Pothier declared that they'd hit bottom and now they'd best look to the sides. 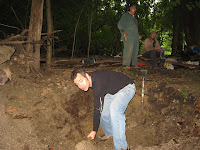 Al had a pocket of good dump to the south of his position and Mac and Tex found some hard packed virgin dump to the north of their spot in the hole... but sadly it was under the day's dirt pile and so any excavation in that direction meant moving the dirt pile on the surface. all the same some old sauce bottles were discovered and there were a few exciting moments when some soda shards and stoneware bottoms were spotted in the virgin dump tract at the bottom of the hole. 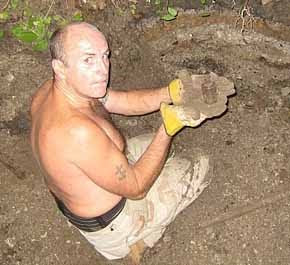 You can read more of the day's adventure in Digging Bottles with The Four Seasons Bottle Collectors in Toronto in the Shovel Guild Library on Dumpdiggers.com
Posted by rob at 5:58 AM No comments: 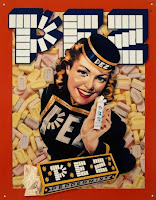 PEZ Dispensers have been collectible for over 80 years! Two of the most famous North American PEZ dispensers are Mickey Mouse and Uncle Sam. Every serious PEZ collector has a rare and special prize they dream about finding every night. Maybe its 'Eeyore with the line on his face', or one of three different Batman PEZ dispensers, or probably some other super rare variation that only a handful of people even know exist.

The article entitled, On Collecting PEZ Dispensers on Dumpdiggers has more savvy secrets, but doesn't go into much detail on how to tell the age of your PEZ dispenser, nor does it give any good solid facts to help junk store scavengers and eBay pickers.

Did you know that there's a patent number on the stem of each plastic pill popping contraption? The first two digits of that number reflect the year span in which it was manufactured. It's helpful to know the date before purchasing a PEZ® and this information will help. Here are two PEZ dispensers in the hands of Steve Reynolds of ‘It’s a Matter of Time’ antiques at Gerrard and Jones Ave in Toronto.

The Pink Panther Pez Dispenser is very attractive and could be among the more rare models in the years to come, if you believe Sabah Karimi in her article, Pez Dispensers You Don't Own.

She writes, "... the PEZ following really does exist... group of serious PEZ collectors meets at conventions around the country to share the secrets of the trade; from history lessons to hosting a trading post for avid collectors, it's a lifestyle of strategic collecting for these PEZ enthusiasts." 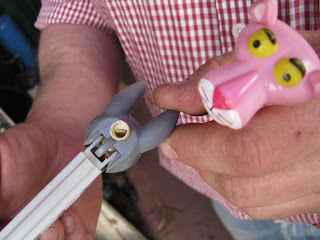 How to Spot rare Pez dispensers today.
This photo shows a close up of the throat whistle in the Shrek Donkey PEZ dispenser. The contrivance makes the distinctive baying sound in keeping with the Eddie Murphy powered voice track of this extremely popular cartoon character. Because of the whistle many of this model of Pez dispensers were well used. Either way I'm sure the whistle feature adds value. Thanks Steve Reynold for giving up a matter of time to show me around your store. Trackback to Robsome blog.

Someone who collects PEZ® dispensers is called a PEZhead. The man who discovered Poly Vinyl Chloride (PVC) didn't patent the process because the material wasn't good for anything in 1880s, but years later PVC pipe and PVC trim is very high demand and used by builders as interior and exterior ornamentation or decorative material to spruce up aluminum siding and cinder block walls. PVC trim is much better than wood for this application.
Posted by rob at 1:57 PM 1 comment: