Fresh from Vancouver, Lucky Peterson is a 30 year old visual artist that just emigrated to art scene hoping to do more gallery shows, get more commissions and sell more paintings. It’s true, sketching and carving wood are his foremost passions, but when Dumpdiggers visited this guy in September, we were quite surprised to find his art studio is absolutely stacked with historic pottery! It turns out that Lucky has a collector’s bug and a (perfectly natural) obsession to locate, excavate and display historic stoneware and early Canadian glass.
During daylight hours inside his cozy little workshop, Lucky carves and paints wood cuts and manufactures high priced art for rich American patrons. But at night he transforms... on hot summer evenings the bottle bug seizes the boy and sends him out with a shovel. He rides a bicycle around the oldest parts of town looking for angles and perfect opportunities to step back in time - looking for a subterranean adventure and the possibility of liberating more historic Canadian stoneware from obscurity. 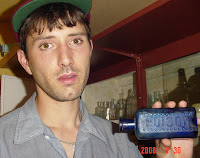 In the quiet evenings Lucky is a lonely digger that explores the city's oldest dump sites and digs deep holes in ’s lakeshore. Lucky digs on weekends, and whenever nobody (site security) is around to bother him, or ask questions. And he’s pretty secretive about his locations, but willing to share a spirited dig with anyone bold enough to contact him. You can find him registered as Lucky on Dumpdiggers.com

After a very busy summer here in , Lucky has unearthed some pretty special pottery to add to his growing collection. He’s found the ubiquitous Vernors and the Wilsons (with the squirrel) and many fragments of other early but common stoneware vessels. And he carefully adds these to the Quebec bottles, and the Vancouver ginger beers that line the top shelf of his emporium.

Lucky is a veteran digger with soy sauce crocks and opium pipes from old town Hutchinson sodas from , druggist bottles from Montreal and stoneware ginger beers from all over Canada. Like most diggers he started as a boy and has found something decent everywhere he has lived. He has pocket watches and porcelain doll heads, cobalt blue poisons and chinese pill bottles, ceramic tooth powder lids, tins, trade cards, and vintage metal signage.

The solution for Lucky is easy because he has such an obvious if unusual passion. So of course he should harness the global market on the internet. He needs a custom e commerce solution because some web development Toronto will help him share his expert knowledge while selling glass bottles and adventure stories on the internet.

Although a seasoned collector with some nice pieces, Lucky is a web rookie with few online contacts. He doesn't know much about eBay, or how to buy and sell bottles in auctions. And that's because he works primarily as an artist making pictures with paint brushes and carving wood into Hieronymus Bosch inspired three dimensional art pieces. He only goes on the computer to use Photoshop, and only goes online to send emails. Consequently, Lucky has very little concept of what his collection is worth, which is fascinating to me... The passionate man collects and enshrines his great 'moments of discovery' without really knowing, or actively seeking to know their true market value.

Another fact remains, Lucky doesn’t tumble his glass or repair his pottery or even clean his collection very well... Yet he admits it’s a skill he'd like to have. Dumpdiggers promises to report Lucky's progress as a collector, and relate the most basic steps he takes to improves his best pieces. 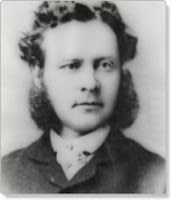 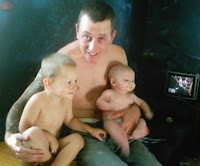 Ex military, tattooed, father of two, Jason Hayter lives in Owen Sound Ontario, a few hours north of Toronto. When Jay isn't looking after his kids, or working on his house, he's digging bottles. He digs for six to eight hours a day, twice a week. Obsessed with finding old glass bottles and early Canadian pottery, Jason sometimes spends whole days at the archives learning about the history of his town and the surrounding villages for the sole purpose of finding town dumps that could yield more bottles and early pottery.

His passion helps him succeed. When Tim Braithwaite first met Ace he was not totally impressed, but Tim is pretty hard to get excited. Timbits has seen every bottle twice and labels 98% of everything on display in Ace's photo galleries as junk - that's Tim's favourite word. For two years Tim has been telling Ace that everything he finds is junk. I have no doubt that Ace finds it frustrating trying to impress Tim with his run-the-mill ordinary treasures. 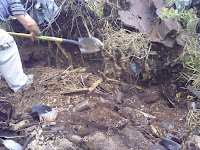 But all that could change real soon... If the Ace of Spades was a mining company his stock price would be climbing; last week Ace told the world about his new farm dump, and he posted some very interesting photos on a brand new discussion forum associated with this website. His proclamation includes images of a terrific farm dump that he's digging with an equally enthusiastic chum.

In addition to this exciting turn of events, Jason informs me that he has evolved a new farm dump location strategy and is now consumed with hiking and probing old farms all over the countryside around his home - with the landowner's permission of course. 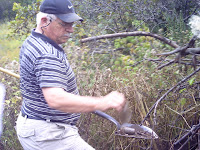 It works like this: Jason uses Google map technology in combination with old county maps that he copies from local 1870s and 1880 alases found in the municipal archives. Ace uses the old maps to mark the buildings, and then uses Google Earth to scrutinize the terrain from the air and look for forgotten lane ways, road allowances and even footpaths away from the last garage or drive shed at the very opposite end of the property from the driveway. Jay sometimes makes his own composite maps at home and prints them out for his hikes. The maps pinpoint 'areas of interest' wherein he and his friend will dig test pits looking for ash or bits of pottery that might signal more buried rubbish. They are looking for really old trash, and that's always down at least six or eight feet - but surface indicators exist to 'mark the spot'. 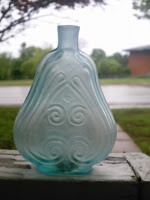 This wisdom is indexed behind the Fundamentals of Finding Farm Dumps as recorded here in How to Find Old Dumps #3, farm dumps. This post explains how the early farmers dumped debris on the land out of necessity, but always close to the barn and out of sight and preferably where it could do the most good to stop soil erosion.

Although still a youngster, the Ace of Spades is fast maturing into an extremely competent Dumpdigger!
Posted by rob at 7:50 AM No comments: