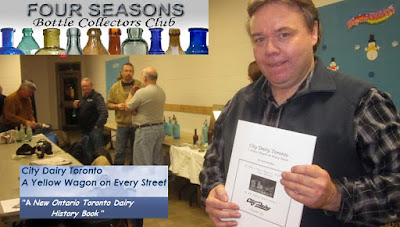 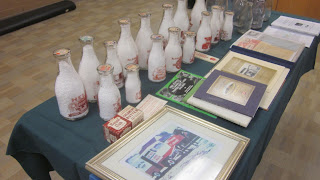 If you're not a bottle collector, and you don't have a 'collecting bug' of any kind, then you probably wouldn't appreciate how satisfying it is to sit and listen to somebody show off their obsession. To study something, anything for twenty years and then write a book is a lifetime accomplishment - and to speak with knowledge and authority about something they know so well, is the treasure of wisdom. Paul Huntley spoke soft words but with great authority as he held up century old milks alongside photos of the original dairies that filled them, and the horse drawn wagons that distributed them. On the 21st of January 2012, Mr Huntley put on a lovely presentation of Canadian dairy lore that was soaked up by an enlightened audience of at least twenty four people, members of the Four Seasons Bottle Collectors (FSBC) club in Toronto Ontario Canada.

The monthly FSBC meeting, the first I’ve attended in three months (I missed Terry Matz talking about his torpedo bottles before Xmas), was at their usual meeting place in the Arbor Heights Community Center in Toronto, which is on Avenue Rd at Wilson Blvd just south of the hwy 401 interchange. Follow the FSBC link above for more information on the club meetings (and then come out to one!). You know what to expect, there’s rare knowledge on display here.

Whenever I do get time to visit these folks, I'm usually the first one there. But this time I was late. Unfortunately I'd taken a nap and had slept until six pm. So I threw on my pants and rushed out the door, checking my email in the car I saw the meeting was scheduled to start at six fifteen.  As I drove up the DVP, I wondered if I should have just stayed home.. Boy am I glad I didn’t! When I pulled into the parking lot to my surprise I discovered it was full of cars. There must be another event happening inside, I reckoned. But no.. To my shock I saw the meeting room was absolutely packed. 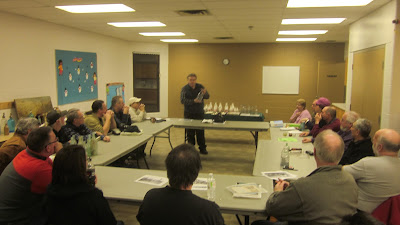 When I walked in the door I noticed it was quiet as and everyone was listening intently to the speaker  I’d never seen so many members and many new faces crowded around the tables to hear the shy softly spoken words of Paul Huntley, a historian and Toronto City Dairy archivist. Paul is a published author and I bought his book. He was showcasing some of the highlights from City Dairy Toronto alongside the actual bottles and photographs that have been reproduced inside.

Paul Huntley must have enjoyed speaking to this assembly of passionate people, Canadian bottle collectors, veteran dumpdiggers; they're a small and tightly focused sub culture that's obsessed with all things made of antique glass and salt glazed stoneware. Here's a crowd that eagerly laps up this respected historian's words and chuckles at his inside jokes, because they truly understand his references to people and places and practices long since forgotten by the rest of society. 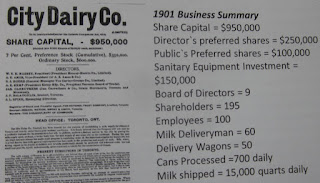 The book is filled with rare black and white photos showing the rise of City Dairy Toronto.
In 1903 the City Dairy had just 3% of the Toronto market and by 1915 it dominated over 40% of the market. At one point there were eight six wagons serving 25,000 homes. From its early beginnings through to its acquisition by Bordens in 1930, the City Dairy maintained its distinction of serving more homes than any other dairy in the British Empire.

You know, I can’t help wondering about all the cows - this was surely a great age for Canadian farmers as the City of Toronto would have provided a wonderful large market for their milk, grain and vegetables. I could imagine how lucrative it might be to sell fresh milk to the city everyday. But it would also be very laborious. In those days milk production was done completely by hand, and so the family farm really couldn’t manage more than twenty five milking cows at once, milking them twice a day. Paul's book details the Massey Farms and the experimental farm as it outlines the early 1900s milk supply chain for Toronto.

City Dairy Toronto
A Yellow Wagon on Every Street

WHAT I HEARD AT THE MEETING 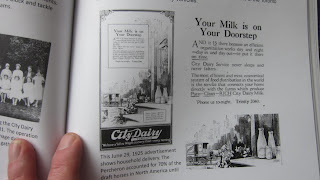 Just as I sat down and opened my notebook I heard the words ‘Thistletown dairy’ (I was reduced to writing on top of my sore leg as there was no more room at the table).  And beside that word I dashed the location Humber River / Albion and Islington. I dont know why I'm writing this here  I have no context for it. Perhaps I thought it might be an adventure destination - to find the Thistletown Dairy. Indeed that does have a ring to it.

Some dairy dates I didn't know
1889 Capseat Indents in the mouth of a milk bottle were introduced into the Toronto market. This innovation in milk bottle production allowed cardboard caps to sit properly and better seal the glass lip of the bottle. 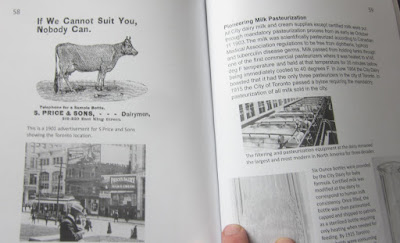 By 1929, two large dairies had taken over Toronto and most of the surrounding towns. These were Silverwoods, which was operating in the east end of the city, and Bordens which had locked up the west and was expanding south around the lake.

Silkscreen milk bottles are often called ACL meaning Applied Colour Labels and the really early ones date form 1937 and 1938 . Applied colour labels were gaining popularity .re and some very collectible early ACL milk bottles are decorated with scenes from the Royal Visit to Toronto in 1939. Are there any such bottles made by City Dairy - I suspect there must be otherwise why would he bring it up? But I didnt see any.

Soon after that, the Milk Foundation was created to help sell milk. This must have been similar to the milk marketing board we have today - they used a collective fund to help advertise milk's health benefits. Look below at an early advertisement for pasteurized ice cream that's 'pure' and wont spread tuberculosis. 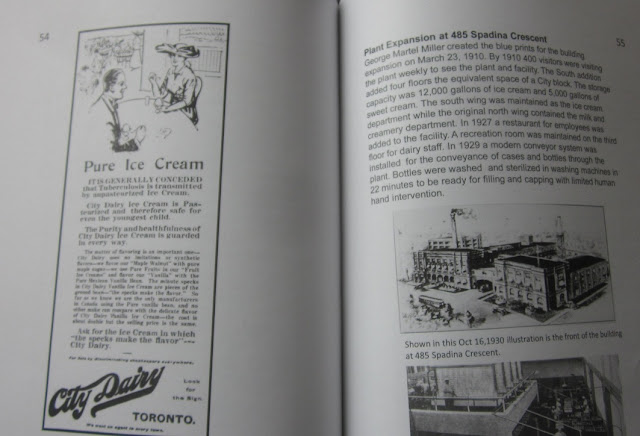 I learned that square milk bottles were introduced after the war alongside the rise of refrigerator technology. the small square shapes were better for shipping handling and they fit inside cramped refrigerator iceboxes better. I made a note of the fact that Paul believes the grey horse was especially sought after by milkmen for early morning milk delivery routes - the grey horse shows up in the dim morning light better, and is therefore safer. Tin tops were not usually found on milk bottles outside the United States. Little tidbits 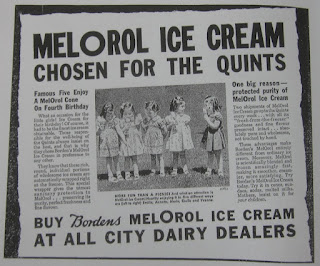 Were amber bottles used exclusively for Buttermilk?  Sean Murphy asked, and Paul Huntley answered yes to that question. The most quintessential examples of these amber ‘buttermilk’ bottles dates from between 1900 – 1910 .

Paul's next appearance is at the East York Historical Society on Feb 15th. Here he will be speaking on City Dairy and Dentonia Dairy as many folks in the society have shown interest in that topic. Paul told me that he always hopes he will meet some people that can relate there own personal stories and memories of the dairy. Wednesday February 15 2012 at  2:00 PM

The History of the City Dairy of Toronto
Speaker Paul Huntley will discuss the history of the City Dairy from its creation including the Massey Farm known as Dentonia. He will also bring some dairy memorabilia and copies of his new publication on the City Dairy. Bring any questions, photos, maps, memorabilia or information you would like to share and take part in the discussion.
Wednesday, February 15, 2012 at 2 pm
At S. Walter Stewart Library
170 Memorial Park Avenue at Durant
Sponsored by the East York Historical Society and
The Toronto Public Library, S. Walter Stewart Branch
Free admission

The second half of the meeting was business as usual. There's lots of planning and preparation being made for the annual FSBC Show and Sale in April - this time there is a new location . And there was talk of having a party on Saturday night for the dealers to swap stories and trade bottles and

Carl Parsons had some wonderful 'cures' or early wacky patent medicine bottles in front of him on the table. I snapped some shots of them as he was making change for my raffle tickets - the monthly FSBC random draw is an exciting event and a staple in the experience of vsiting the club meetings. Carl always talks up the quality of the bottle being raffled (its a secret) but I find they are never as good as the ones he has on display in front of his notebook at the table.  Look below at the amber 'East India Cure' and the queer yellow glass Extract of Smart Weed. 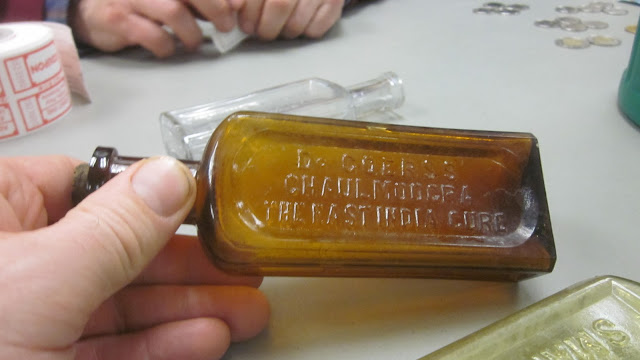 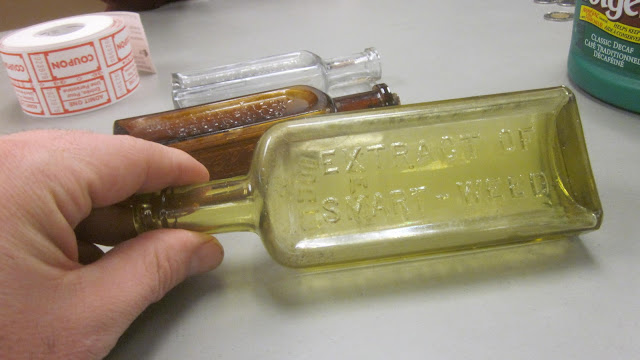 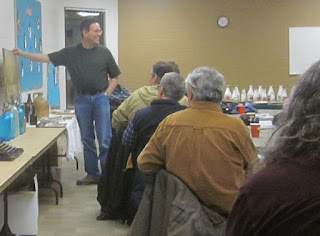 The best part of the bottle club meetings is hearing each member talk intelligently and usually very passionately about a piece of pottery or a glass bottle they have recently discovered, or treasured for some time. There is a theme for each meeting's show and tell and its fun to see the variations on that theme as presented by each collector operating inside their own particular niche.

Before Sean spoke there were three other collectors who presented their materials but being shy they would no doubt prefer not be chronicled here. Sean is however no stranger to my blog salutations. 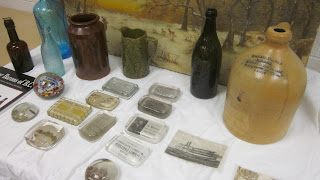 And that's a good thing because Sean Murphy is a constant fountain of great material and encouragement to the rest of the members. His show and tell displays are consistently remarkable.

On the 21 Jan meeting Sean showcased a wide variety of glass paperweights set around a smattering of other rare and impressive objects including beautiful redware pottery and a lovely jug stenciled ... 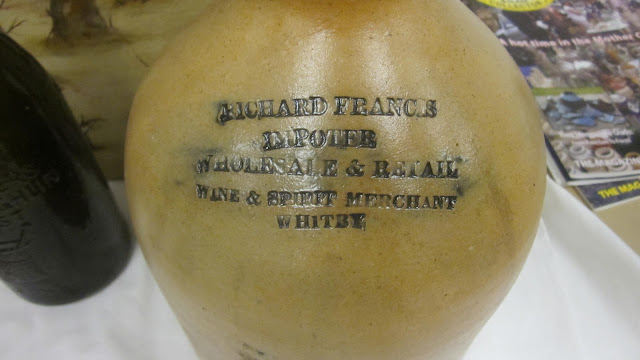 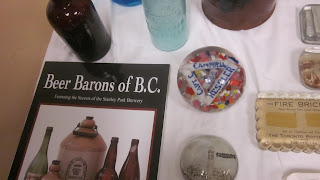 I will ask Sean to provide more information here