Good news for Dumpdiggers all over the world – US cable television audiences have rediscovered a love for antiques and collectibles! Now there’s more than just Antiques Roadshow on the boob tube to educate and entertain collectors.

Much like the TV show Pawn Stars, the new TV series that I watch at 10pm on Tuesday nights on History Canada mines the drama of bartering, and the human exchange of words and emotions as buyers and sellers try to find common ground.

Unlike Pawn Stars, which is a cable TV show that's coloured by people who want or need the money, Mike Wolfe and Frank Fritz, the American Pickers travel great distances to deal with people who're usually more than a little reluctant to sell. And there’s the conflict. TV and indeed all storytelling mediums require somebody versus somebody or something to make interesting drama. Pawn Stars has a dysfunctional family dynamic going on, and The Traveling Antiques Road Show often pitted experts and against collectors. Here its different – the conflict comes from Mike and Frank and their desire to buy commodities that are not for sale. And therein lays the biggest single problem with the show. It’s just not real enough, and the numbers don’t quite add up.
These two experts travel around Iowa, the greater Midwest, and the Southern United States in a white panel van that’s emblazoned with their red and black Antique Archaeology business logo. Unlike real pickers who peruse antiques barns, yard sales and estate auctions, these guys show up uninvited at people's houses and attempt to buy their cherished antiques and collectibles. They are assisted by Danielle Colby-Cushman, who works remotely from a home base in LeClaire, Iowa to help them run their business. 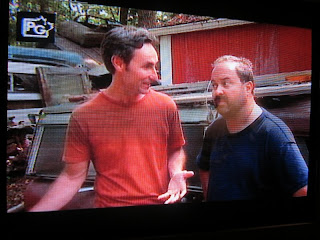 According to the site’s web copy, Mike Wolf has earned a reputation as one of the country's foremost foragers, traveling coast to coast in search of forgotten treasures. Where other people see dilapidated barns and overgrown yards, Mike sees goldmines packed with rare finds and sensational stories. Wolfe and Fritz go prospecting in the homes of casual collectors, hoarders and people who have inherited large deposits of their ancestors junk.
What do the guys pick up exactly?
The Antique Archeology duo seems to get real excited by old musical equipment, vintage kitchenware, all manner of advertising signs and rare bits of scrap metal. They like old automobiles evn if they're only good for auto parts - they'll even buy old rusty bicycles. Fritz has a fondness for antique toys, antique oil cans, and Honda motorcycles.
The secret to being a picker is having a strong base of curious customers that can fuel such prospecting expeditions with ready cash. Mike's clients include interior designers, art directors, photographers and collectors. And although it’s probably the most important part of the business – it’s significant that we never get to see these people. When the acquisitions are finalized and the items are being loaded into the van, the producers of the show will flash graphics showing the amount paid and the amount at which the item has been valued… well anyone that’s actually in this business knows that’s just a hopeful guess. Not every item sells and in their business model the margins are so tight that if one item fails to sell it will ruin their month! I know... its just television.

These images are snapped from my TV set during the "Super Scooter" episode. The half hour shows how the pair works together. Wolfe is nearly drooling over a Vespa Ape scooter. The owner wants $5,000 for it, and Wolfe offers $4,500 -- which is rejected.

Season 2 premiered June 7, 2010 and turned into a real monster Monday hit for History when it was paired with Pawn Stars. American Pickers debuted with more than three million viewers and this month has approached four million, placing it among the 20 top-rated shows on cable.

and because Frank is my favourite of the two pickers, here's a link to his site:

http://www.frankfritzfinds.com/
Posted by rob at 7:51 AM 4 comments: