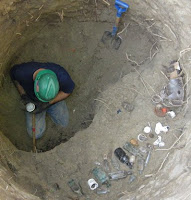 Last Sunday, Dumpdiggers got an email from an Ole friend in New York City boasting about conducting a clandestine archeological dig in one of the most densely populated places on planet Earth. The Manhattan Well Diggers are tireless explorers and this story highlights their abilities and imaginations.

The author is a dedicated digger that waxes poetic about his trips twenty feet down in the depths of his hometown. New York City has some of America’s most historically fascinating suburbs and the trinkets, bottles, jars and crocks and porcelain potlids that these guys dredge up makes all Dumpdiggers suddenly snap to attention . 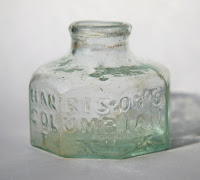 In this particular story, Dan and his team dig a deep hole behind a renovated townhouse and there go back in time to recover these wonderful objects. With that same trusty blue shovel Dan and his team recover various pontiled items from the 1850s and early 1860s including an eight sided desk ink: HARRISON'S / COLUMBIAN / INK and a CLIREHUGH'S / TRICOPHEROUS / FOR THE HAIR & SKIN / NEW YORK. Also uncovered was a brown and white potlid with an eagle at the center atop a shield baring stars and stripes, CHLORINE DETERGENT & ORRIS DENTIFICE / FOR / CLEANSING & PRESERVING / THE / TEETH / PREPARED BY / ROYCE & ESTERLY / DENTAL SURGEONS. Soon after we discovered a BARKER'S / CHEVEUX TONIQUE / FOR THE HAIR / BDWAY N. Y 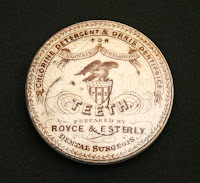 Dan starts his latest adventure by telling readers some historical facts like how in 1851 the Hudson River Railroad opened a station at West 30th Street and how business flourished as breweries and soda-water factories, malt houses, stone cutting yards, large stables and slaughter houses, lumber and coal yards, grew up around the tracks etc. The housing was notably inferior as it was hastily erected to accommodate newly arrived immigrants. The narrow houses and wooden buildings sprang up overnight, sometimes right alongside stretches of stylish brick townhouses (which is what they were digging). In the 1850s and 60s, downtown Manhattan is reported to have contained approx 20,000 structures, mostly small or mid-sized factories and sweatshops. 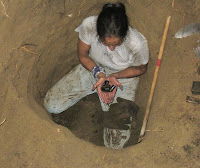 The fire insurance maps show few of the savory little details however, and do not differentiate between style or function of the buildings beyond showing churches, and hotels. The only way to learn what actual living conditions existed from place to place is to dig. 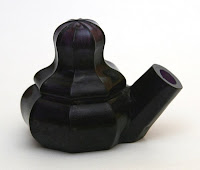 The nicest piece recovered, in my opinion, is this beautiful teakettle ink circa 1860-65, in mint condition. When positioned in direct sunlight it produces a marvelous deep purple colour. It’s made of dark violet or black-amethyst glass, possibly of English or French origin. Dan describes how it was ferreted out from near the privy floor, and remarks on how the exact likeness has never been seen before (by him).

Vist ManhattenWellDiggers.com to read the rest of Night Soil.
Posted by rob at 9:16 PM 5 comments: