Behold, Dumpdiggers Fashion Accessories.  Below is a link to a Men's necktie on Zazzle.com that shows a vintage map of Toronto circa 1901; the map shows the Toronto lake shore and the downtown core, including the oldest section of the city around King St East and the new downtown core of Toronto that formed around Yonge St as it stretched north to drive its way up the province. Yonge St. bisects the tie in the middle - the designers were very smart to focus on the lakeshore.

http://www.zazzle.ca/vintage+map+toronto+ties
What was Toronto like in 1901? Its curious but that date is significant throughout the British Empire as its the year that Queen Victoria died, and a great many photographs were taken of everything as though people knew they would like to record things just as they were... this map is part of that trend.

It was the end of the Victoria Age and the beginning of the Edwardian Age. The reign of King Edward VII, whose short-lived governance (1901-1910) preceded the modern House of Windsor in England. The "Edwardian" style broadly encompasses the years of 1901 through 1919. The end of the century brought the dawning of a new age and a new attitude toward life. It was an era when social differences dissipated and the mores, customs, and expectations of the citizenry came together Stephen Rowe. The Edwardian era was a historical moment of tremendous technological and social change

You can read the Toronto City Directory for 1901 here. Its a cool interactive book. Check it out.

Here is a picture of Yonge St on Pretoria Day June 5th 1901 presumably connected to the Boer War?

Checking into Hotels in Toronto in 1901 was definitely more labourous... all those stairs! But look here there were several first rate hotels to choose from in the city at the beginning of the Edwardian Age. Here are four:

And don't forget Rossin House, The Queens Hotel and of course the King Edward Hotel which is still in operation today.  The Queens Hotel sat on the land currently occupied by the Royal York Hotel, across from Union Station. The Queens was owned by a charismatic millionaire named Dick McGaw who had worked his way up to owner from an entry level position as bellhop 1862. The modern day Royal York Hotel was built in 1929 and was completed as the beginning of the Great Depression.

Most of the city north of Bloor St was not built yet in 1901. Yorkville was a separate community,

Boys went to school at Trinity College on Queen St West, St Georges in Yorkville or Upper Canada College north of St Clair and Avenue Rd.  For girls, St. Clement’s School was founded in 1901 in buildings around and between the apple orchards. The St. Clement's School facility didn't become an exclusive school for girls until 1930 something, but today its one of Canada’s leading single education private schools and boasts a dynamic community of approximately 470 female students, from grade 1 to 13 as it were.

Here is a picture of Wycliffe College at the University of Toronto, also completed in 1901 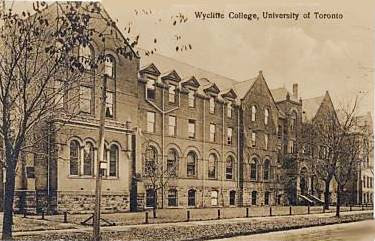 This is the first picture of the school taken immediately after the building was erected in 1901. It soon became the #1 postcard that students would send home to their parents.

The Edwardian Age is one of my favourite periods of growth in Toronto and a great many buildings were erected in the city in thirteen years between 1901 and the beginning of the First World War in 1914.