About this time last summer a digger named Little Hole went looking for Campbellford's first municipal dump. He found it. And although it had been probed by other diggers, to his surprise it was still full of gingerbeers and early Canadian glass.

The survey map above was made in 1878 and shows Campbellford as a thriving settlement on both sides of the Trent River. Notice the black dashed line that bisects the image? That's the proposed railway line which was to be built two years later in 1880.... That railroad line was moved south and Little Hole used this map to help find the treasures documented in this article - finding the real railway line was the key to finding the 1885 town dump.

X marks the spot! Little Hole found the place outside anyone's thoughts or perception, but still inside the actual town of Campbellford. Here beneath his shovel was a (mostly) virgin dump and Little Hole could only imagine the historic treasures it might contain... 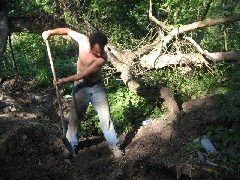 Little Hole immediately called for some help sinking a hole. And I of course embraced the challenge - like a borrowing rodent I moved dump.

We spent evenings and weekends at the site all summer long, and really came to know the place. The Campbellford 1885 town dump is in fact many dumps, spread out over about fifty years time. Under three feet of nondescript ash and dirt, there were about a dozen well stratified layers of trash. Each of these pockets is a period in time. Each can tell the story of the community, to anyone willing to listen. Every relic unearthed is another sentence in the chronology of Campbellford's existence. 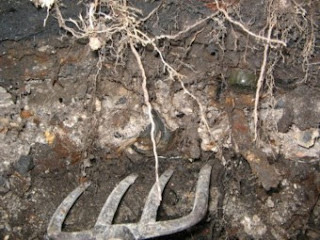 The pearl ash in the stratigraphy is from two major sources - very hot fires both here at the dump, and the population of the town produces furnace ashes - which was also mixed with lime and used as road paving material. Some of this ash could be road paving that's been removed. Up until the early 1900's the streets in Campbellford were 'paved' in hard packed potash made by settlers burning hardwood trees while clearing their land. 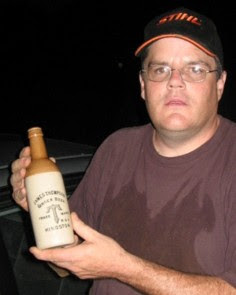 Little Hole, who collects 1800's Ontario ginger beers bottles found this rare and special treasure on a hot night in late August. Here he is on site holding a mint James Thompson ginger beer bottle from nearby Hamilton Ontario.

August 17th 2006 was a very special day. On that day Little Hole and myself, Rob Campbell hit a big pocket of well preserved ginger beer bottles, and lots of rare whiskys and sodas. It was the mother-of-all goodie veins and we diggers chased it down, under a tree, right to the very bottom of the dump.

Before ‘flipping for picks’ (like most dumpdiggers we flip a coin to see keeps what) we lined up our symphony of dug relics to collectively admire the hoard.

Pic of the Picks The Quest in Campbellford Ontario culminated in the best cache to which I've ever contributed. Little Hole snapped this photo late in the afternoon and I love the patches of light on the trees in the swamp behind the dump. 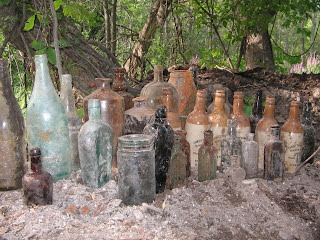 The whiskeys, inks, medicines and ginger beer bottles recovered here were waiting in the earth for almost one hundred and twenty years.
Posted by rob at 11:00 AM

Hello,
Good article with nice pictures.James Thompson ginger beers are from Kingston,Ontario.
I'm a SCUBA diver and would like to dive in Campbellford.Could you provide a map where you think the dump may have been close to the river?I'd be more than happy to share anything found if we could meet sometime.

gm - I'm sorry I didnt notice your comment before...

I have the email function hooked up through my profile btw, and a message to anyone else who lives in Eastern Ontario and wants to get together.

I don’t know if Scott dropped you a note about this dig or not, but seven of us made the dig on Saturday.

Jim Debustin, Scott Hall, Gary Leschynsky, Glen Moorhouse, Carl Parsons, Kert Wrigley and myself made the trek from different areas of Southern Ontario to the Tim Horton’s in Campbellford. We arrived at about 9:30 am and headed over to the dump just before 10:00. We were having some difficulty locating the dump from the aerial map that Kert brought along. We seemed to be close to where we needed to be. We finally agreed to an elevated parking spot on the old railway line, where the tracks had been removed. No doubt a great snowmobile run during the winter. Then a walk behind the town service vehicles parking lot. While the rest of us were scratching our heads attempting to navigate the map, Carl found the dump in what seemed like a matter of a few seconds. Clearly, after 40 plus years of digging dumps, Carl can just smell antique bottles under the surface. The weather was perfect, cool with a slight breeze and best of all, no bugs except for the odd slug and spider living in some of the castoff. Some of those spiders were huge. We started digging close to the edge, but soon discovered newer bottles and not what we were looking for. The group then spread out in different directions and tried our luck in areas which either didn’t appear disturbed at all, or where someone gave up after trying some pilot holes. Glen and Scott seemed to be digging really deep. I thought Glen was going to need a ladder to get out. Carl disappeared and probably found the best site closest to the swamp. We all seemed to do pretty well. Lots of awesome bottles. Unfortunately, there were far too many broken bottles, insulators and stoneware which was a big disappointment. Perhaps one bottle in ten was intact. There was some good castoff also, which I took a selection of. It was starting to get dark early of course at this time of the year, about 4:30ish and I had to make a few trips with bottles back to the car. The steep incline along the railway line was a real killer on the ankles. Well, mine anyway. Gary and I waited awhile to see if the gang was going to join up again as the daylight was starting to fade quickly. I was so exhausted that after five and a half hours of digging and no one else packing it in for the day, Gary (my son-in-law) and I called it a day and headed back to hog town. A great day, some good finds and perfect digging weather. Too bad I ran out of steam early. Hopefully, everyone else stuck around for dinner or at least a post-dig discussion.

Well worth the trip and hopefully, good finds by all.

went to visit the site yesturday. does anyone figure there is anything worth digging or will i be wasting my time? found the site and wondering which way would be the best to dig

Hi,My name is Marc and came across this site and was wondering if one of you can help.My great grandfather was a druggist in campbellford until his death in 1921.Im looking for one of his bottles ive seen some on line.Any help would be appreciated Thanks Marc D

Hey Marc. Check out Facebook page my hometown campbellford. Lots of people look and get into like that all the time.

Wow ! Some great conversations in what seems to me like a huge part of campbellford's history ? A dear friend and long time resident of the town Francis long had told me when I was a teen approximately where the dump was and so I looked at what I thought it was 1984 maybe and found some broken glass but at 15 was not willing to start digging to deep .after reading this I sure understand where it is now ! The hunt the chase to unearthed pieces of a towns history and a place I called home for over 30 years . R.i.p frank and thank you , james 🙏