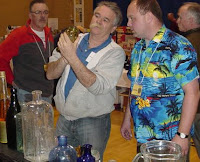 At 6pm on Saturday April 18th the Four Seasons Bottle Collectors Club was busy setting up their annual show and sale. The Toronto Bottle Show is the largest antique glass bottle and pottery exposition (and tins, stoneware, insulators, ephemera and so much more) in Canada, with approx 75 antiques dealers and impressive attendance. There was a palpable sense of excitement in the empty gymnasium as I looked at all the empty tables... In just a few hours the dealers waiting outside would enter and display thousands of historic antiquities for show, sale and trade. 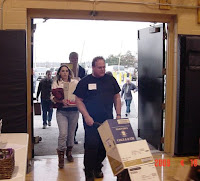 Saturday Night Set-Up
I laboured right alongside the other members of the Four Seasons Bottle Collectors Club on Saturday April 18th to help set up the show. The entire episode is the subject of this article, Dealers Night at The Bottle Show which also chronicles the excitement of watching Malcom and Newf unpack and sell three years of dug treasure to ready buyers and collectors that were the other dealers. 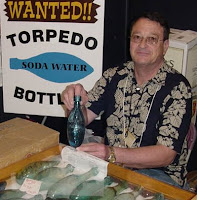 On April 19th 2009 the morning sun warmed the faces of several hundred people outside the gymnasium at Humber College in Rexdale, Ontario as they waited to enter the building and marvel at all the beautiful glass inside. 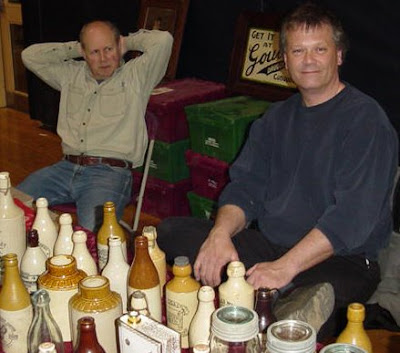 Readers can find more pictures and stories documenting the 2009 Toronto Bottle Show in the Dumpdiggers Library.