Beachcombing for Fun and Profit #4 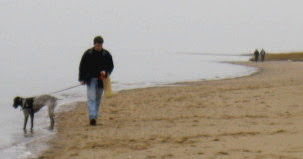 Five things to collect for cash on eBay the next time you walk along the beach.

Beachcombing is best when you can take off you shoes and immerse yourself in another temperature to become part of the waves washing the shore.

The beach has always been the best place to go and clear you mind; the coast is a wide open space where Dumpdiggers can look for patterns and pearls of wisdom in their own lives - occasionally one might bend a thought and pick up something valuable.

Sea glass is man made glass that has been tumbled for no less than twenty years in the rivers, lakes and oceans of the world.

These broken bits of colored glass are the frosted remains of bottles and jars that have been broken up by the waves, and then caressed by the water and sand over time to create smooth, opaque sea glass.

It takes ten years for a shard of glass to show any significant etching, and twenty to thirty years for all jagged edges to be completely polished and rounded by lapping waters. 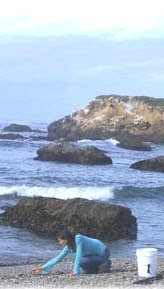 Sea glass is the most beautiful consequence of civilization in nature - the classic shapes and colors attract artists, designers, photographers, and merchant specialists like West Coast Sea Glass. Some of the photos in this post are copyright, and used only with their permission. The colors of this glass are so fashionable they have inspired designer clothing lines, swim wear and a line of Benjamin Moore paints. Good authentic pieces sell fast on eBay. Exotic bits find ready buyers in jewelry makers and costume designers.

Some beach front homeowners will grout green and blue signature shades right into kitchen back splashes and shower tiles. Bright bits of sea glass are sometimes crafted into cottage window mosaics and art pieces - for years the best pieces were dangled from ceilings in ‘hanging mobiles’ in souvenir shops along the beaches of the world. Those sea glass mobiles you remember seeing in the Carolinas ten years ago would have been a good investment. Just one piece of red or orange sea glass, which sold for a whopping $5 in 1970, sold for $15 in 1980, could fetch between $75 to $100 today! 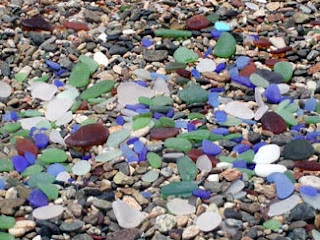 But like any collectibles market there are rules. The online market has evolved some criteria by which to measure each object and value is imposed accordingly. Dumpdiggers recognizes however that this market is driven primarily by aesthetic beauty. Next in importance is color, size and of course age which relates directly to authenticity. Once again the wise old man’s knowledge is the key to making money here… Richard Lamotte, author of Pure Sea Glass: Discovering Nature's Vanishing Gems seems to be America’s foremost sea glass expert and perhaps the best person alive today to teach the Art of Sea Glass collecting. 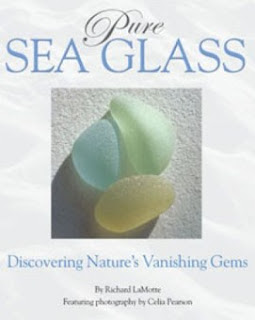 Richard Lamotte lives in the Chesapeake Bay region, which by all accounts is rich in beach glass. Richard has a vast hoard of nuggets, and his book is a compendium of all his knowledge collecting and preserving this unique treasure.

In his text, Lamotte describes how after particularly fierce storms in the bay, he hauls out a lime green kayak and paddles the deserted shoreline to scan the water's edge for bits of icy amethyst, jade or citron among the rocks and driftwood. One day's haul, he writes, often includes glass fragments or bottle stoppers that have been churning underwater for more than 100 years.

Unlike other collectibles which are prized in mint condition, sea glass is best after its been worn by weather and waves - much like the message in a bottle, each piece has been on a long journey. 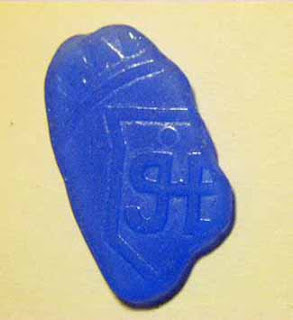 Light blues, yellow and pink varieties are rare. Look at this fascinating specimen that I found on Digger Odell’s bottle books website – this piece was collected by Florence Gray on the New Jersey shoreline - she wrote to the master in 2003 for help in trying to determine the 'bottle of origin' - what a fascinating quest; Dumpdiggers admires Digger Odell, but could find no evidence of his answer. If anyone knows what bottle this is from, and or whether or not Digger Odell solved the quest, I would love to see it in the comment box.

Red beach glass is precious because red glassware is expensive and as such it’s used sparingly in signal lanterns, decorative vases and premium consumer glassware. Richard Lamotte, who has collected over 30,000 specimens in his Maryland home, writes that ‘red and orange sea glass is found only once in every 5,000 pieces’. 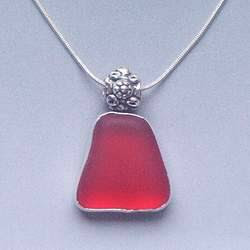 Genuine black sea glass, which in actuality is an uncommon dark olive green, is also very rare and that’s because it’s really old. Every piece is a two hundred year old shard from the early days of glass making. The ‘onion bottles’ and other ‘black glass bottles’ that were used before the 1850s precedes all the vitrified species we find in dumps today.

Lastly, take note that sea glass snobs insist that genuine sea glass must be absolutely blasted and not at all transparent – if you can see your friend through the piece, toss it back into Nature’s tumbler.

Sea Glass like every other species of collectibles is subject to fraud. No family of collectibles would be complete without some controversy and contentious behaviour to spell caution among collectors. 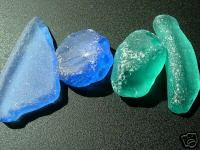 Fake sea glass has now appeared on eBay, and beyond serving industrial applications (as mosaic tiles, etc) bits and pieces are sometimes disguised and sold as the real thing. But of course expert collectors can spot the difference in a heartbeat, and armed with their knowledge and wisdom so can you... This is Fake Sea Glass. The picture has been borrowed from HL Sea Glass, which is a nice informative jewelry designer's website (that specializes in real sea glass) and warns consumers about buying the fake stuff. According to Holly, these bits have been artificially aged in a rock tumbler. Note how the edges are not completely worn down, and the is a general absence of frosting and random pockmarks.

Dumpdiggers believes that genuine sea glass is a great investment as it may be something of an 'endangered species'. In the 1960s plastic began to replace glass in many consumer products, and by 1970 recycling programs focused on beach clean-up and collection. Modern white sand beaches are rebuilt today with imported sand that has absolutely no old glass content, and thanks to global warming the ocean’s rising waters are burying older stocks... And finally, let's not forget, not too many people dump glass bottles in the water anymore. 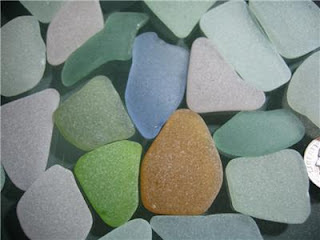 This lot of pastel coloured sea glass sold for thirteen bucks on eBay last week. Take my word for it, the green blue New England glasshouse colors are really hot, and the amber shards become valuable after they have been water worn for a century or more - these shards all look to be very old. 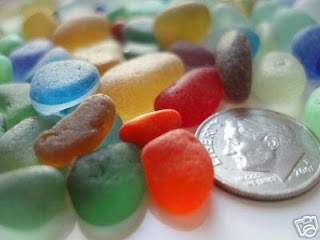 This colorful mass of gems is an eBay offering by a Seller named English Sea Glass that ends on Feb 17th, 2008. Dumpdiggers follows this auction and wonders about the individual collector that amassed this hoard… 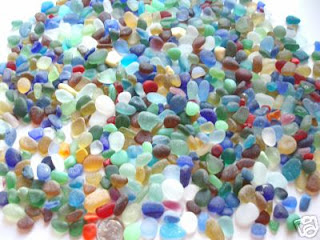 Were all these beautiful shards secured in one good afternoon at the beach? Or, more likely it’s the product of an entire vacation, or perhaps an entire summer spent scouring the shoreline? Currently there are seven bids and the price is already above two hundred US dollars and climbing fast...

"There seems to be a nostalgic, emotional attachment to memories of collecting sea glass," writes Richard LaMotte. "It takes people back to a childhood activity at a very happy time."

Thanks for your generous comments. The nice blue piece is the center section of the Phillips Milk of Magnesia logo (see page 125). I'm not sure when they stopped embossing it but my guess it is from a 1930s to 1940s bottle.
Happy hunting!
Richard LaMotte