The excavation site of the Forward and Newton condominiums, on the S.E. corner of Bathurst and Fort York Blvd. in downtown Toronto, has exposed the site of what was once the Through Freight & Passenger Depo of the O.S. & H.R. Railway (the Ontario Simcoe and Huron Railway circa 1870), and here, on the threshold of this hole in time, I encountered a professional excavator with small treasures that were made and sold over one hundred and thirty years ago.

Professional excavators are Dumpdiggers too, and they're always curious about what they find deep underground. So when i asked to come take a look, they were more than happy to show off their finds and discuss the history of the location. 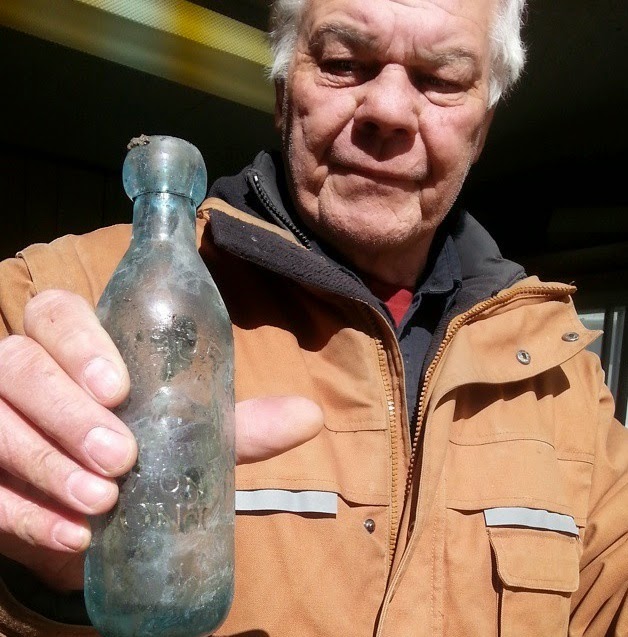 Here's Saul Beringer with an Alex Burns / Toronto aqua blob top soda.  It would have had a cork stopper. The "Blob Top" closure was stronger and was often selected by early carbonated beverage makers because it could better withstand the corking process at the bottling plant. The bottom is embossed with the word "B".  Traditionally bottles with rounded bottoms are referred to as Ballast Bottles, but I'm not sure that would apply in this case.  The specimen has no cracks or chips

The bottle was recovered by the shovel man who works in tandem with the Anpro backhoe operator and they fetch what they can from the gaping maw of their all consuming machine that must move so many tonnes of earth per day to remain on schedule. 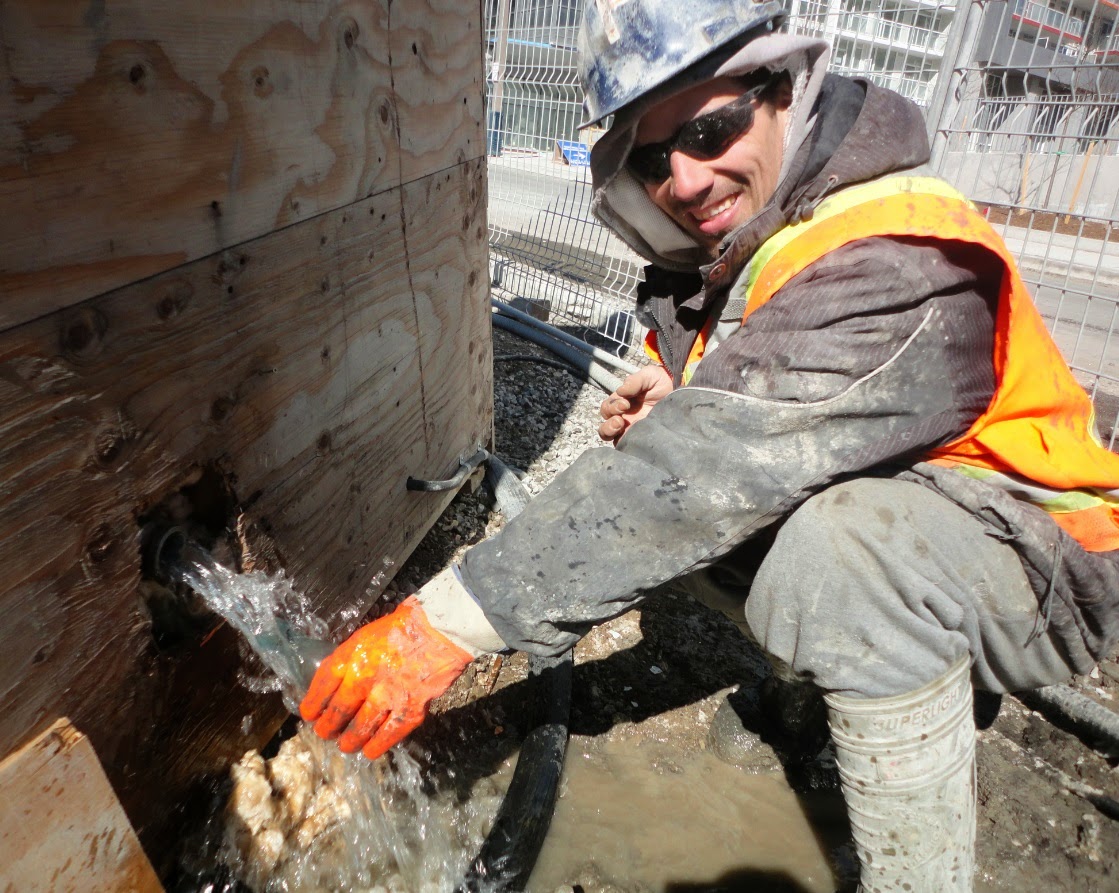 They have a system. But honestly, between the two of them, they probably only recover about one percent of the bottles in the pit.... 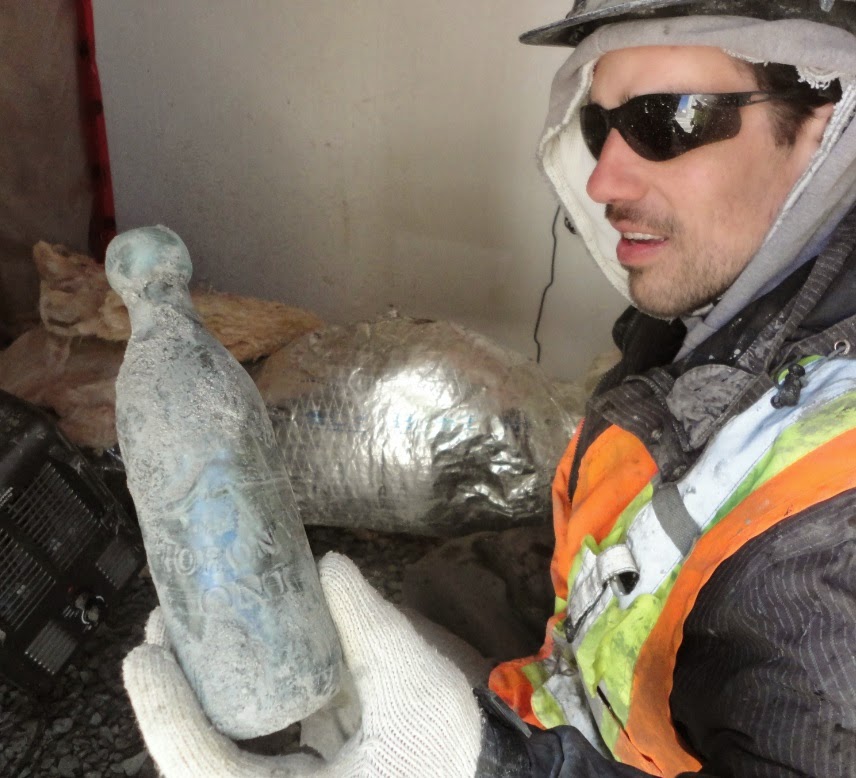 
Who Was Alex Burns And Why Was His Bottle Found Here?

We know from old municipal records that Alexander Burns broke off his partnership with his brother William Burns of A & W Burns Beaver Soda Water Works in Toronto in late 1877. He went solo in the soda water and ginger ale business from 1878 to 1882. 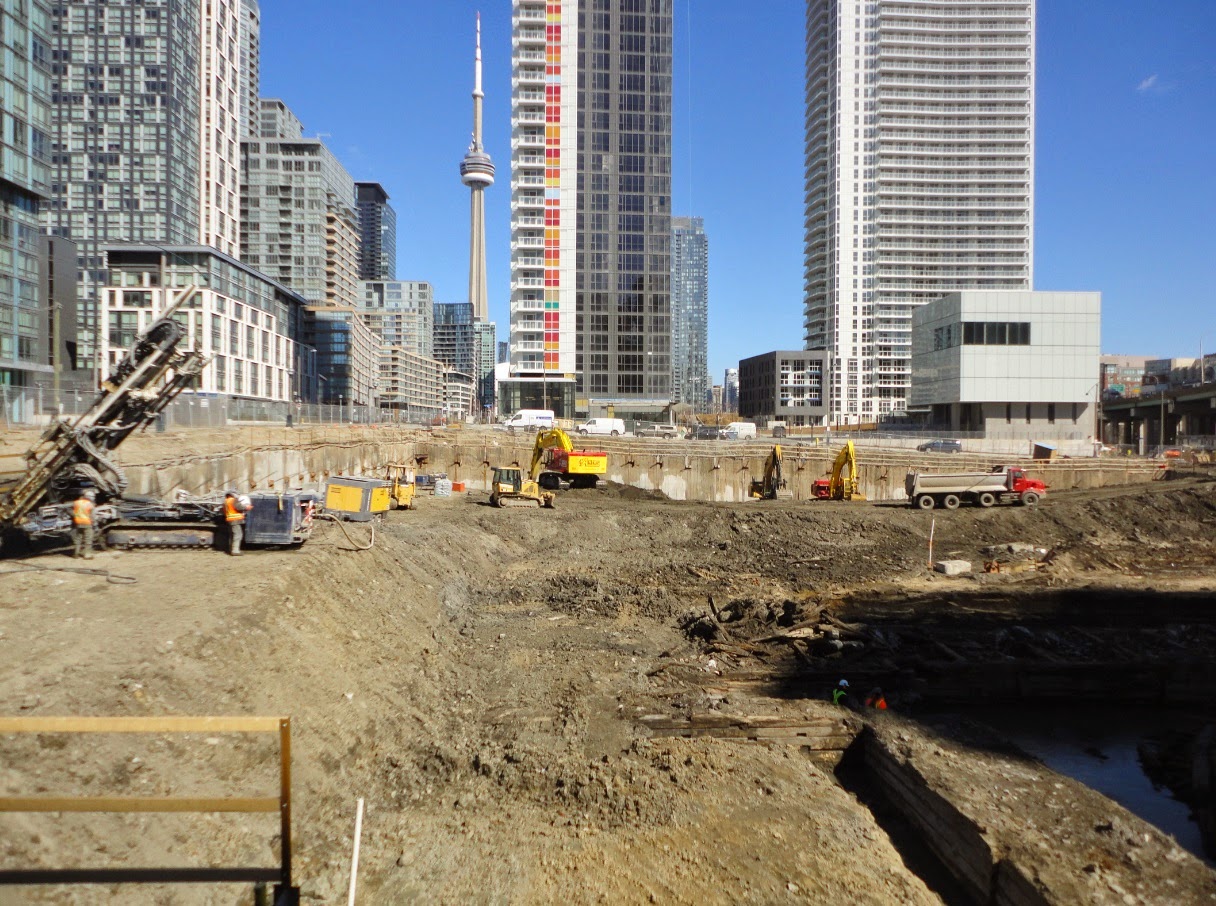 Alexander Burns made Belfast Ginger Ale which was a particular recipe, not too sweet, and not fermented, so consequently its non alcoholic. It's a sparkling and clear beverage that has a most agreeable odor, and is free from any intoxicating qualities. Many early ginger ale makers professed its medical properties.  The exact composition of the 'Belfast' blend is not known, but it is generally understood that ginger, capsaicin and citric acid, especially lime juice are the chief flavoring ingredients. The addition of lime juice to ginger ale imparts a rich fruity quality acquired in no other way. A bottle of Belfast Ginger Ale probably sold for a penny or two on the steamship in the 1880s.

A mint condition 130yr old Alex Burns Belfast Ginger ale bottle sells anywhere from $30 to $60 today. The bottle was most likely made in the USA because it's so similar to others made there in this same shape, size and glass composition. However the word Toronto embossed on its side ensures there will always be a place for this specimen in Canadian antique soda bottle collections. 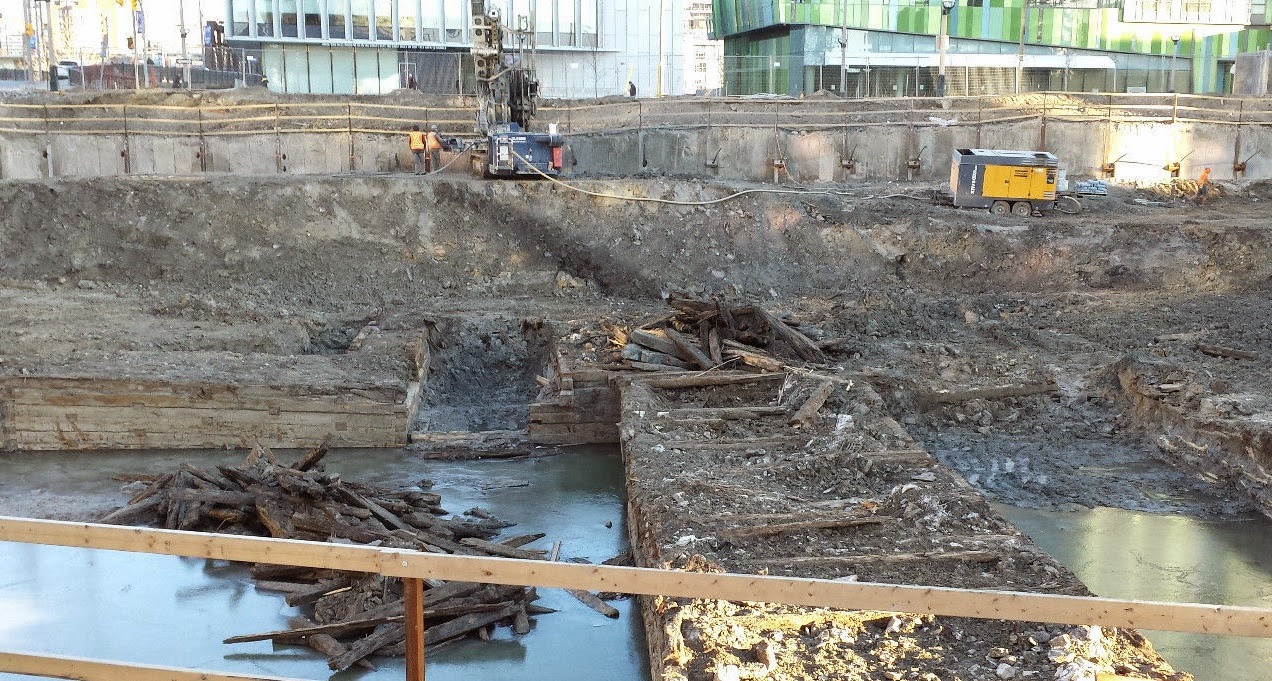 This bottle was not found at the very bottom of the pit. It was found above the docks that are now visible in the dig site, and above the murky water we can now see at the very bottom (but the excavators will go much deeper yet). That's because the bottle was used and discarded in the 1880s, and not the 1840s or 1850s when the first docks were buried to make way for the railroad and bigger ships. (in the late 1840s).  According to Abel DaSilva, who is friends with  the backhoe operator, the colored bottles, and the really precious Canada West bottles from the 1850s and 1860s are found in the muck below the docks (on what was once the lake bottom). The passenger ships docked there, and it was common to clean the ships while they tied up in the harbour. The sweepers always dumped the passenger's garbage overboard.

That means there's lots of older stuff down there... waiting to be uncovered.

Below is a map from the 1850s (?) and here you can see its just one pier to the right of the Queens Wharf below the train station. 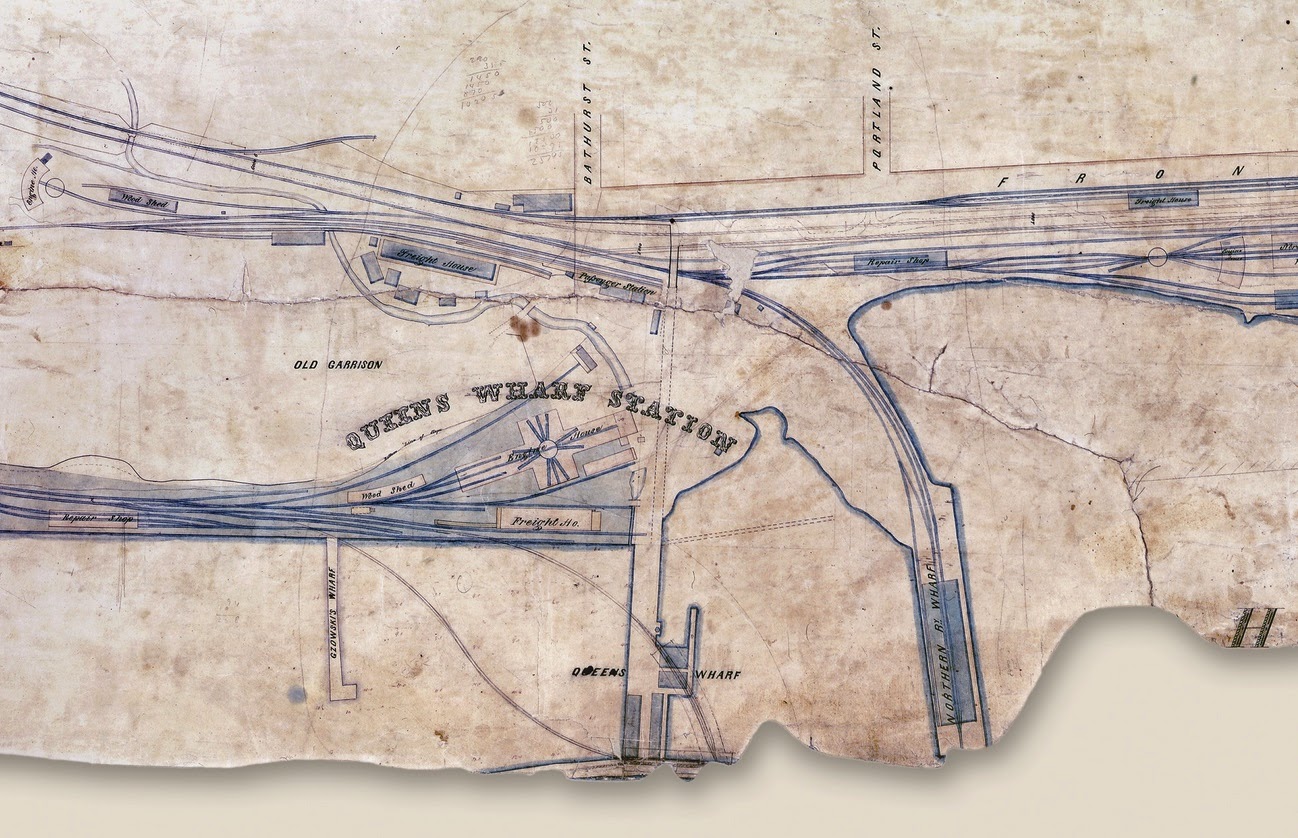 Queens Wharf Station was a railroad stop and steamship ferry port. Most of this is now buried ten feet of more under the pavement of Bathurst St.today...  I can only imagine that Fleet St got its name because a fleet of some sort was literally parked there at one time, docked along the military pier in the harbour. 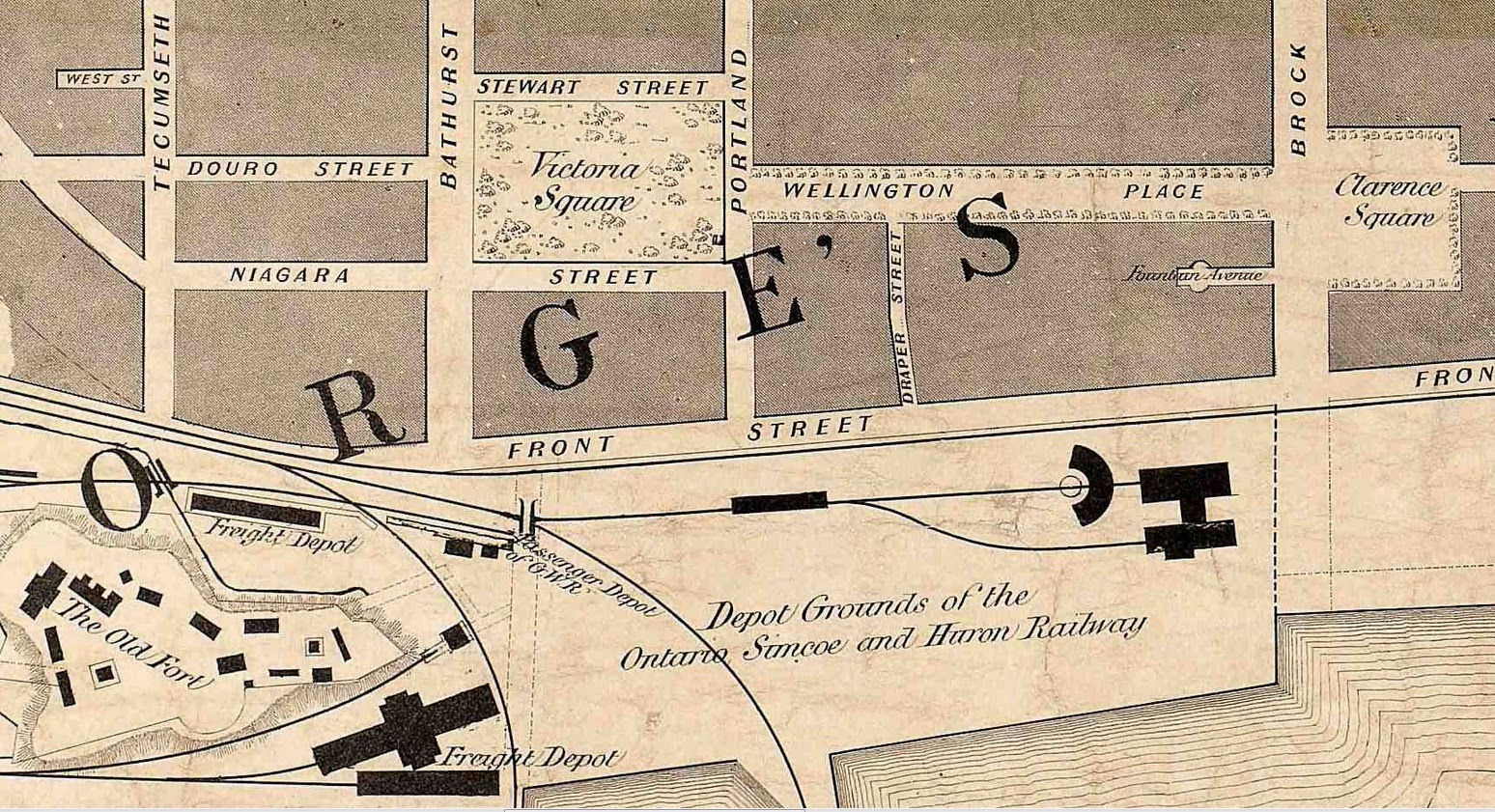 Below you can see the railway had just one short stocky pier in 1857.  The Queen's Wharf was presumably where the business of government and the military docked. 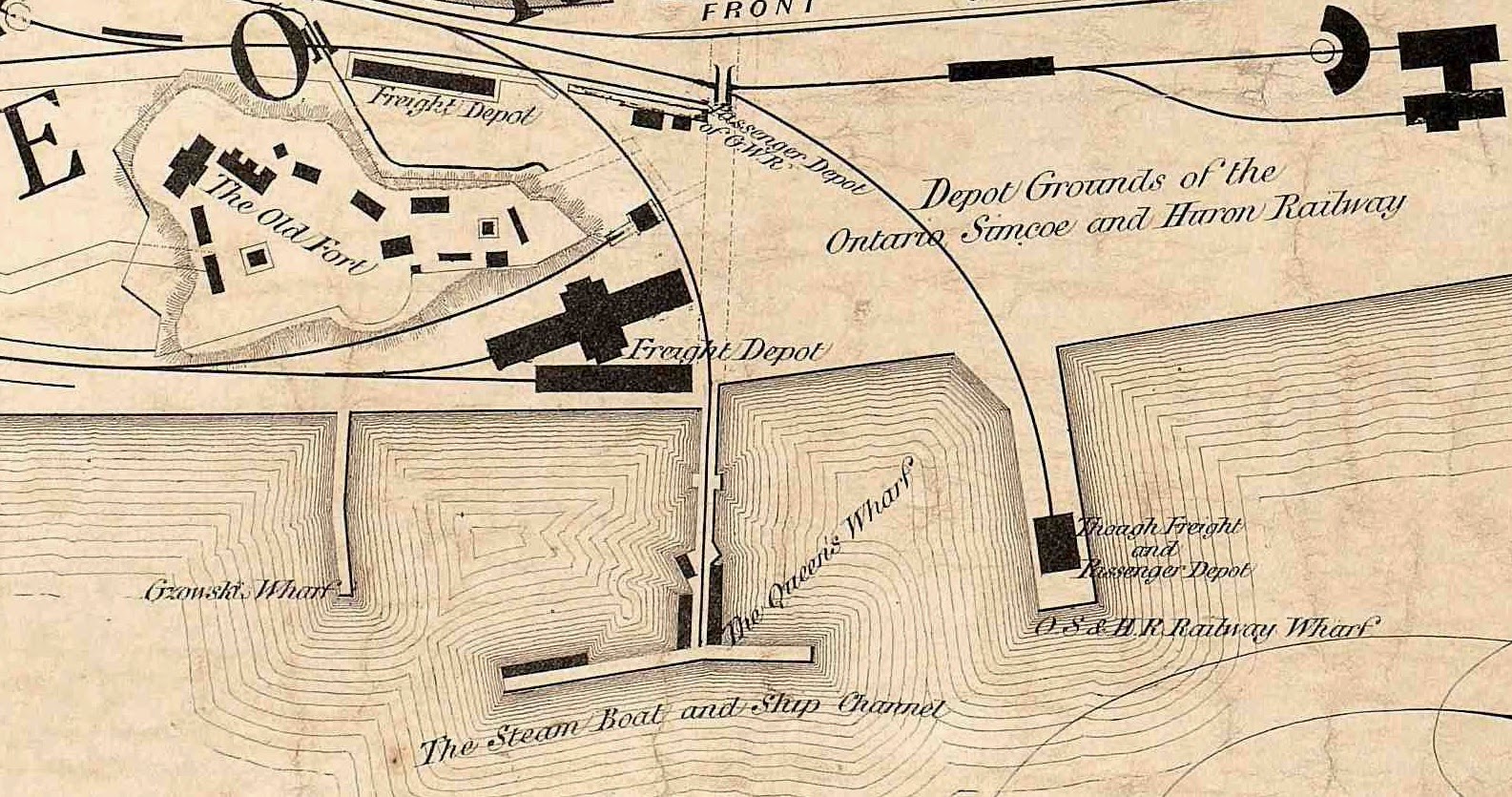 The backhoe operator and other experts believe this hole in the ground is directly above the Through Freight and Passenger Depot of the O.S & HR Railway Wharf which you can see on the bottom right of the 1857 map above. Click these pictures - they expand.

This picture of the Toronto Harbour also dates from the 1850s, and shows a busy port with good rail connections. You can clearly see the old fort, and from that find the T shaped Queens Wharf (now underneath Bathurst St.) and right beside it, the busy O.S.and H.R. railway wharf is on the bottom right hand corner of the first plate (in the middle of the picture).

The Ontario, Simcoe and Huron Railway

In July 1849, the Toronto, Simcoe & Lake Huron Union Railroad was founded by Frederick Chase Capreol and Charles Albert Berczy. An act of Parliament, known as the Guarantee Act helped finance construction of the railway through the sale of bonds, with the interest guaranteed by the colonial government. But the financing was anything but stable, and there were a few sensational stories of fraud and stock 'bubbles bursting' in the newspapers of the time.

1853, May 16 - The first train in Ontario runs between Toronto and Aurora on the Ontario Simcoe and Huron Railroad Union Company line. The first train was driven by W.T. Hackett who also took the first locomotive into Kansas City. Below is a picture of Engine #2, The Toronto. 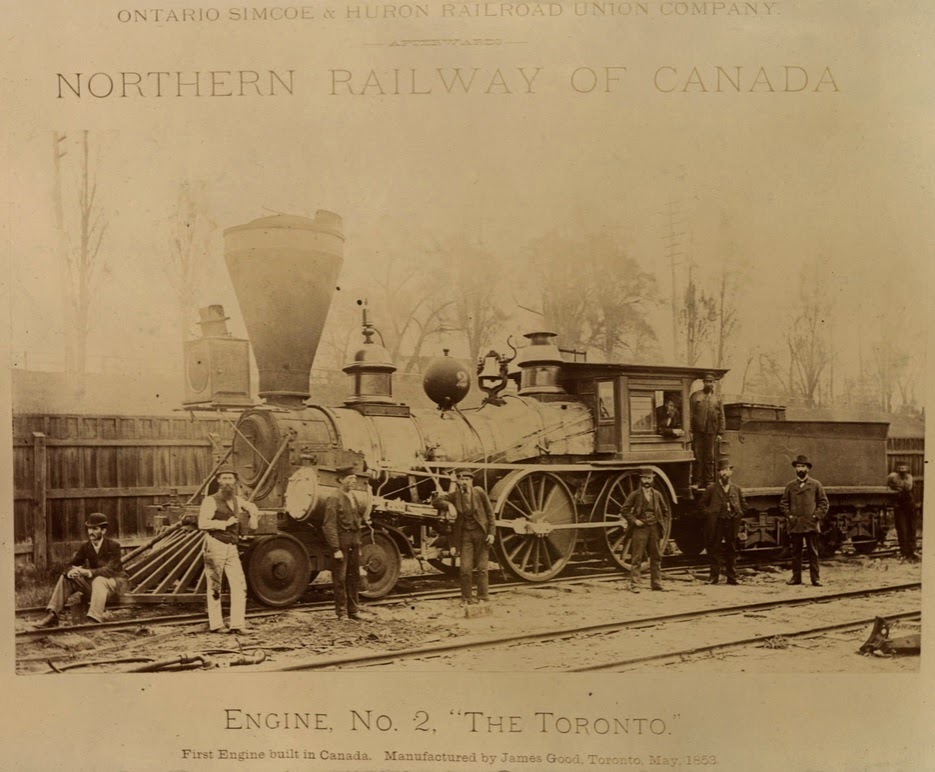 The railway was originally known as the Ontario, Simcoe and Huron, referring to the three lakes the railway connected. The aim was to provide a portage route from the upper Great Lakes at Collingwood to Toronto, where a variety of other shipping routes were available.


These pictures expand! Click the pic to see the busy rail yard and port system of the early 1860s 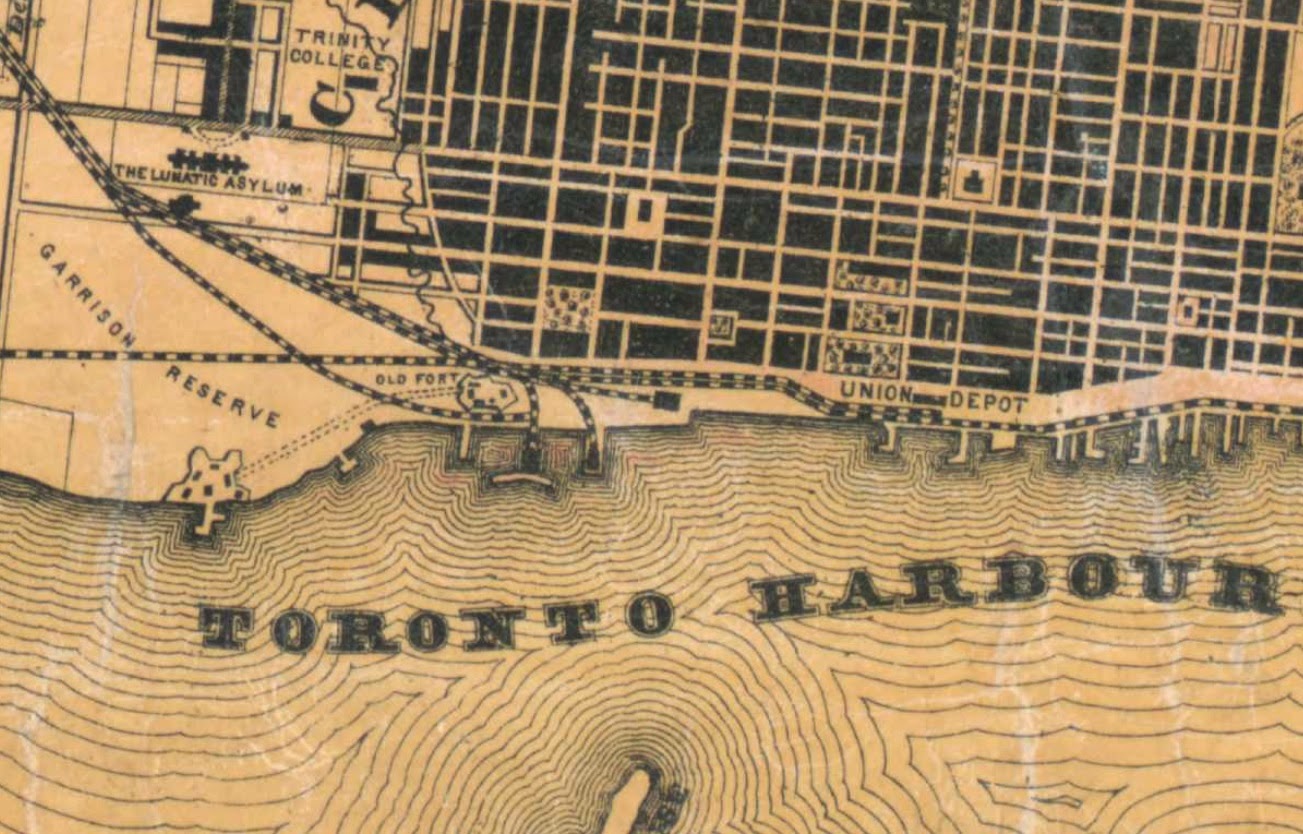 The Port of Toronto is the gateway to Ontario; fast forward twenty more years and we can see how the port and the railway grows as business and commerce expands on the Canadian frontier. In 1887, the Grand Trunk Railway (GTR) gained a controlling interest, and the takeover was formalized in January 1888. Now there are four piers, each connected to a railway line.

I believe the picture above is from 1884, and now you can see it gets really busy in the bottom left corner and indeed all across the lake shore. This is when Alexander Burns was selling his pop. 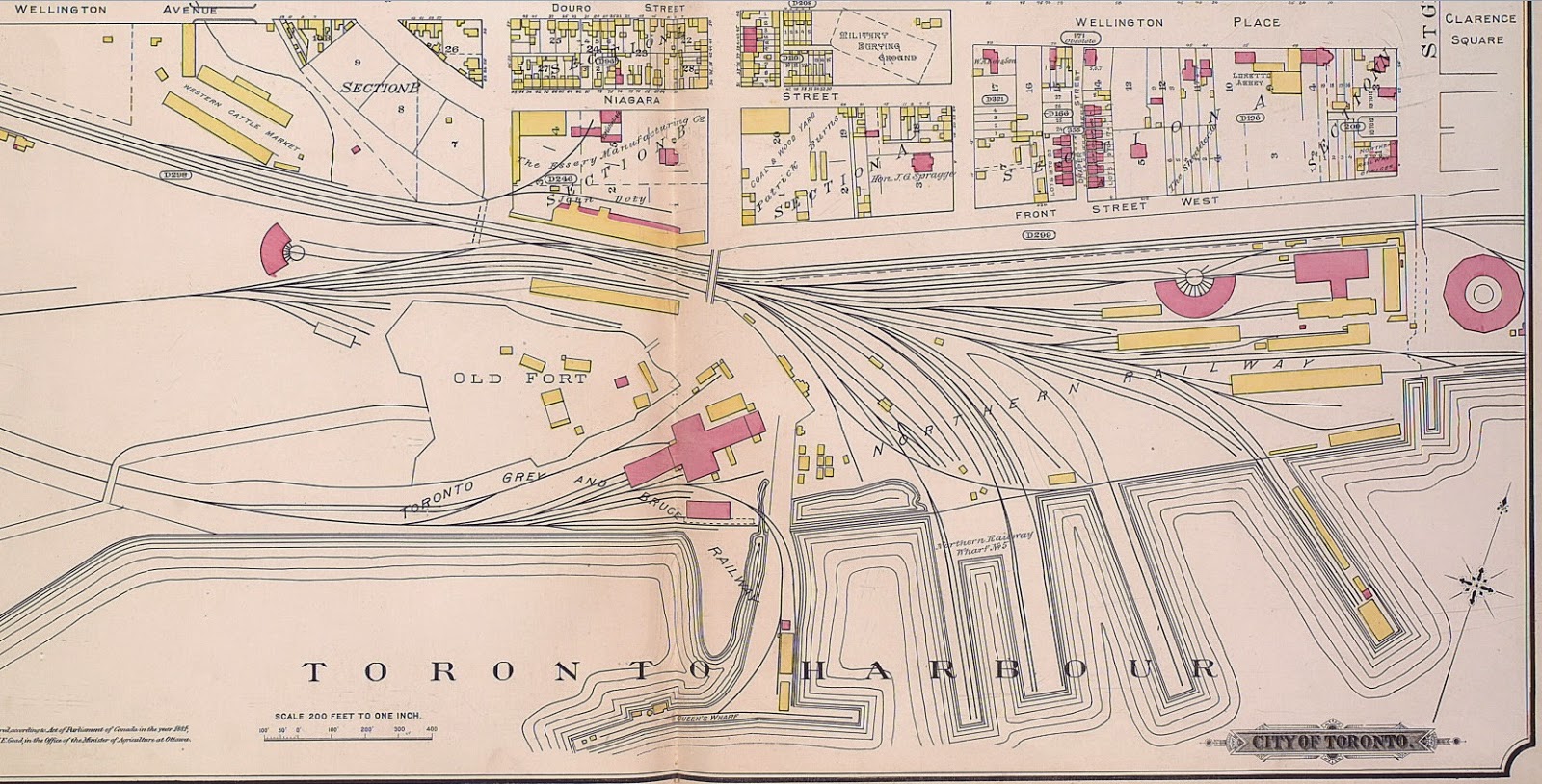 Look at the intricate transite connections with their piers in 1894 above. You can see the railway yard to the right of the Queens Wharf has four piers now.

Here are steamers docking at the railway piers in 1913. Look at the smokestacks and industry in this photo and imagine all the garbage that went over the side of these boats with little or no concern for the environment. Their primitive glassware, medicines, sodas, beers, and sealer jars, whisky jugs, crocks, clay pipes, dental tooth powder jars, ceramic moustach grease containers -their most industrial garbage are among our most coveted and collectible treasures today. 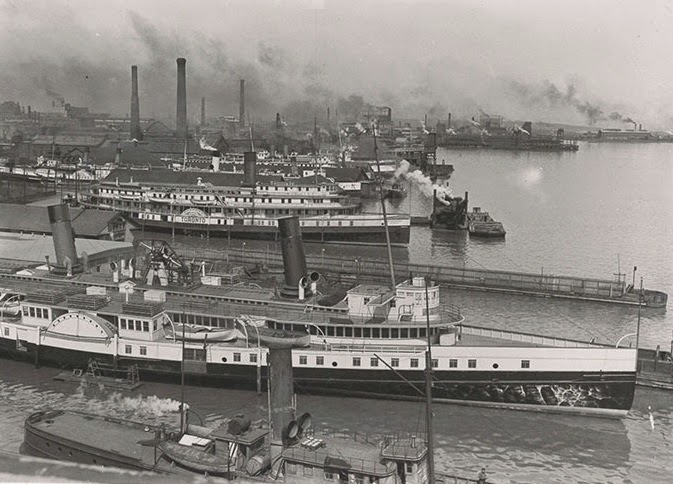 Fast forward one hundred years from this exact same spot, looking in the same direction... 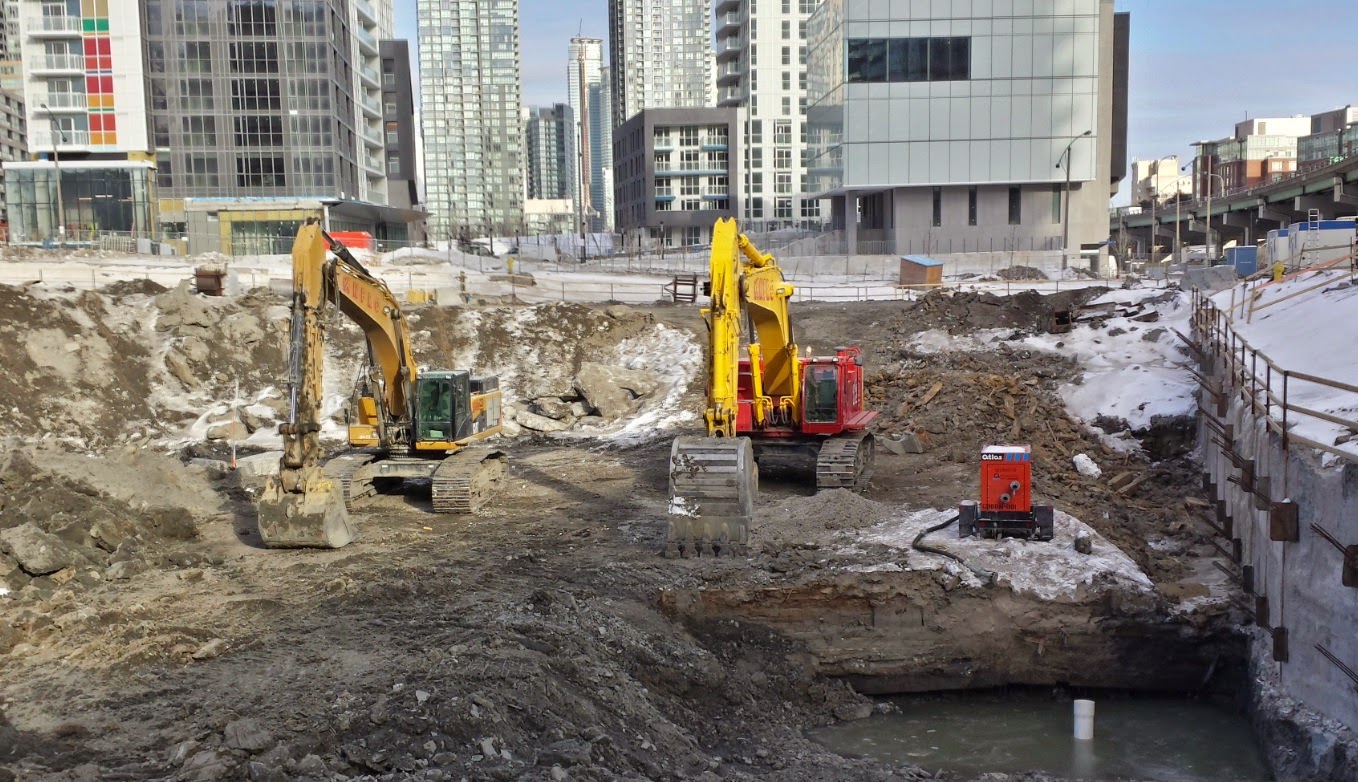 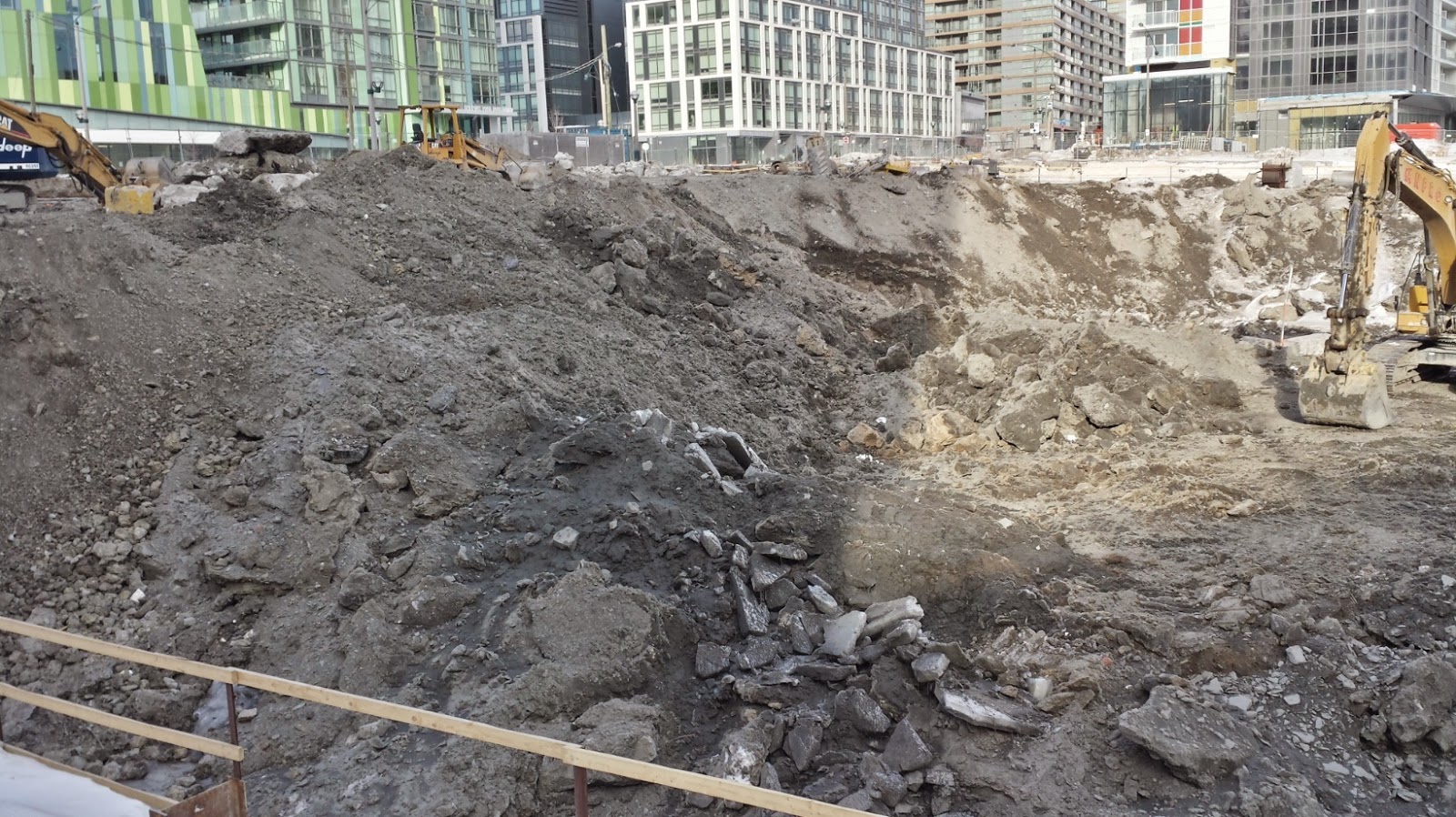 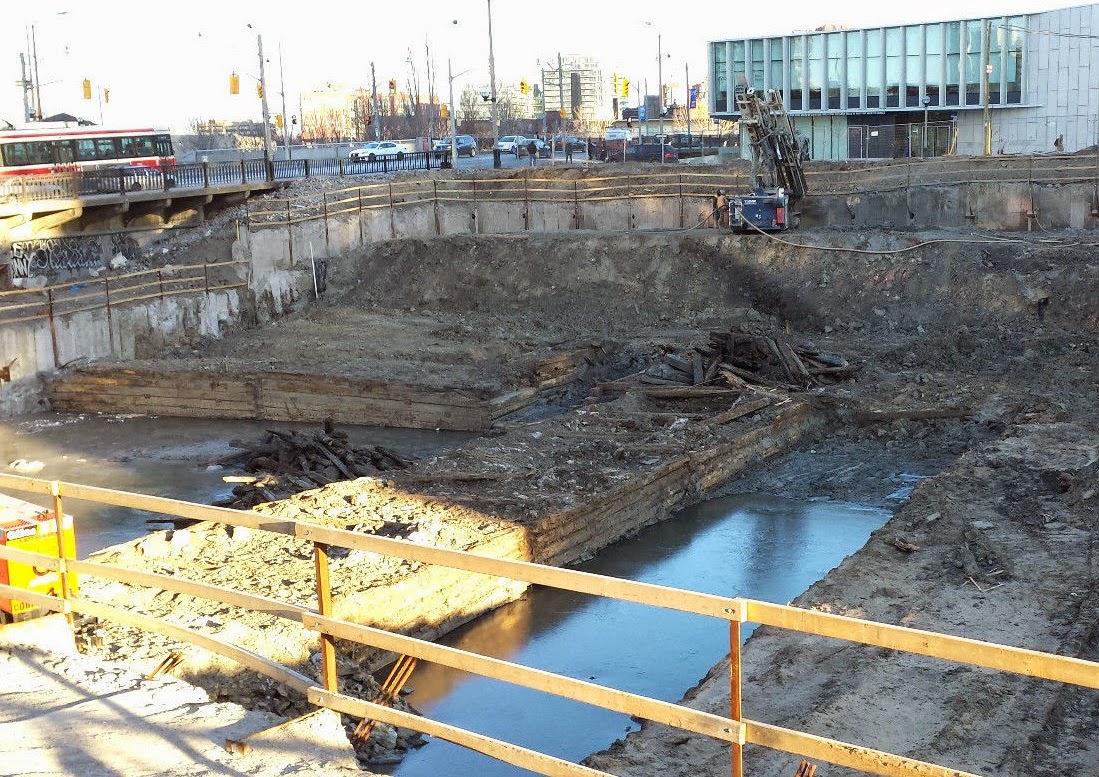 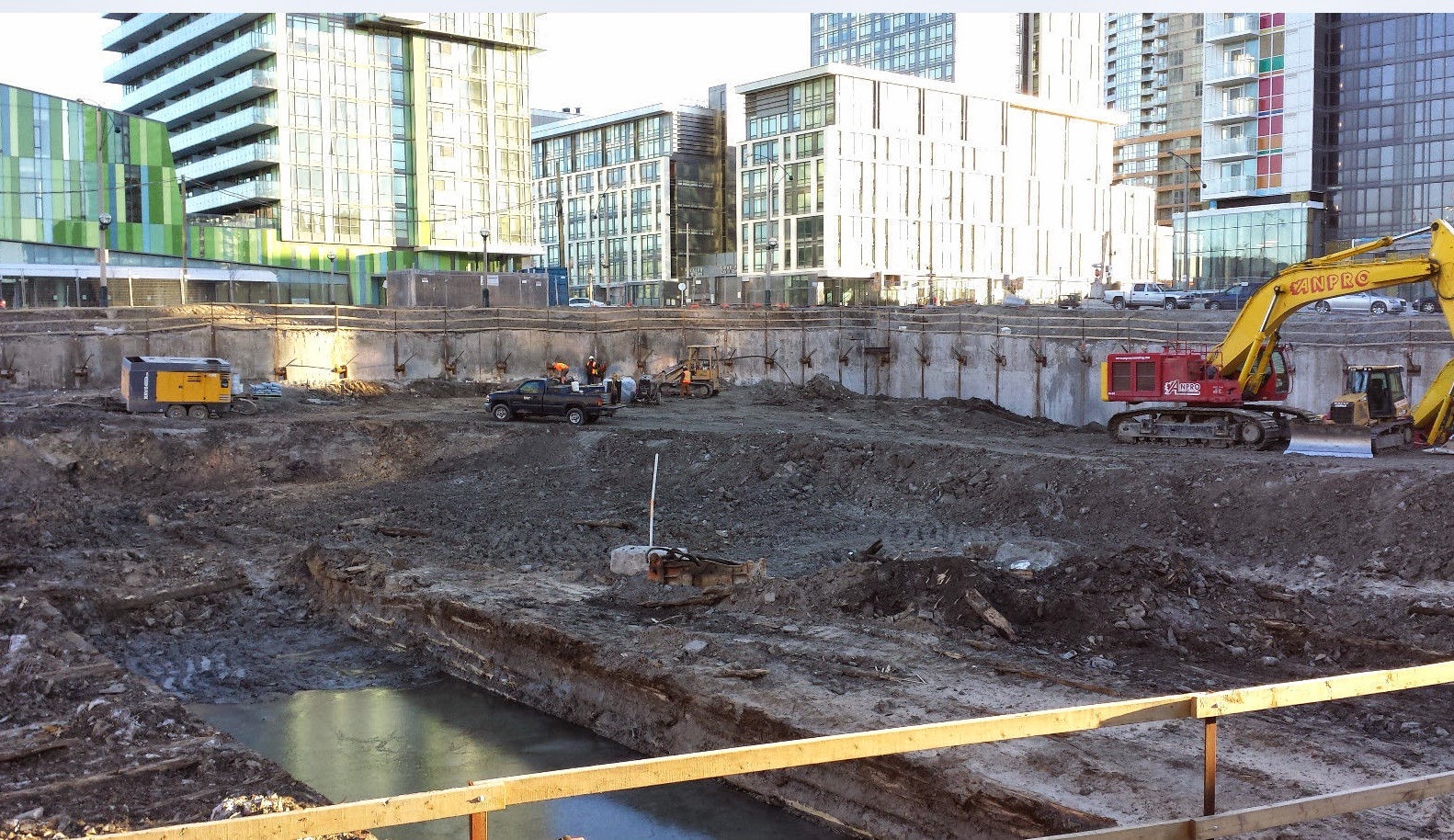 Behold we see the wooden piers where the steamers docked to unload small wooden boxes filled with goods from other parts of the British Empire and America cities south of the Great Lakes.

Like Brigadoon, the Toronto waterfront is exposed to daylight again. But not for long; in the background you can see the Condos are marching 'Forward'

Forward is the name of the condominium building that will stand here in a few more years time. 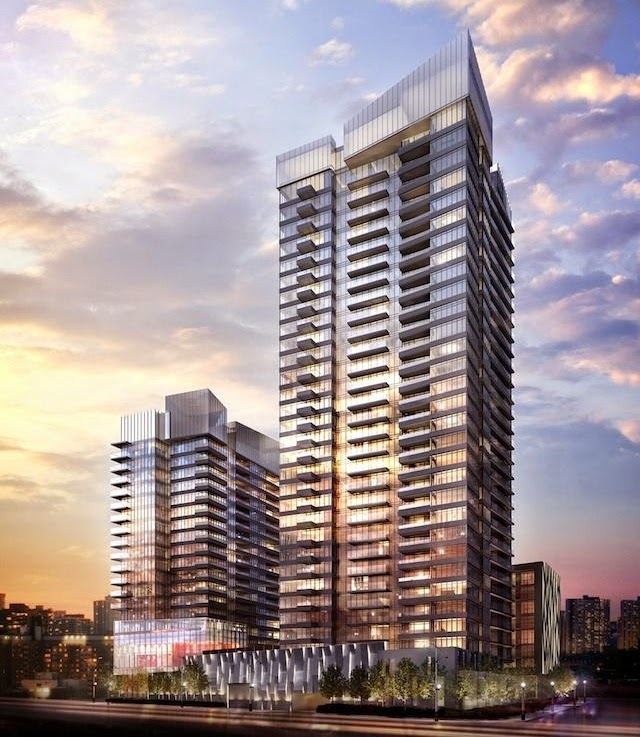 Forward Condos, joins Newton Condos at the west of Concord CityPlace. The 30 and 18-storey towers are designed by Page + Steele / IBI Group Architects.
Posted by rob at 9:13 AM

What a cool story. You did a lot of research. I hope you have a chance after work to go into the pits and clean up more buried treasure. I have a friend who did the same thing when they built the St. Louis arch in the 60's. Old Leo worked for the St. Louis Water Dept. and went into the pits after work and created is bottle collection. When he died last year and they had his auction there were boxes and boxes of bottles and very few there knew the story of where they came from. Your photos, maps and dates really tell the story. Keep your story with the bottles. Mark

My wife and I went down to have a look after we heard about the 1830s schooner that's been found.

This is so cool ! I hope they at least put up a public info plaques display with photos and maps etc explaining all this