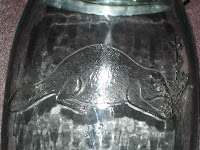 So just before the holiday that Dumpdiggers calls Christmas started, Tim Braithwaite (stonebottles) bought a beautiful beaver jar at a local auction sale and posted this close-up photo of the crisp embossing in the Dumpdiggers discussion forum, and of course this caused me to wonder about fruit sealers and crisp beavers in general, and how they came to be so coveted? … and what about those ‘left facing beavers’? What’s the story behind those?

Early Food Preservation in Europe and the USA

Let’s start at the start… In France, in the early 1800s, the process of hermetically sealed cooked food was developed by François (Nicolas) Appert, who was by trade a pickler, an expert confectioner, a brewer, a distiller, and a chef. He established the principles for the preservation of certain foods in hermetically sealed glass containers, (which he himself designed for the experiment). Basically he was the first person in the history to prove that air tight containers could preserve food.

Appert really had no explanation for the success of his experiment. He believed the exclusion of air and the application of heat were the major factors in keeping the foods in his experiments from spoiling.

Across the channel, an Englishman named Peter Durand patented the idea of airtight tin-plated iron cans, instead of glass jars, for food preservation. Cooked meat, fruit, and vegetables could now be hermetically sealed in metal containers. The British had lots of tin on their island and were the world leaders of brass munitions, but their first tin cans were actually made out of iron and were terribly heavy and hard to open. Here's one found a few years ago that was made in 1837 and when opened was found to contain perfectly edible veal.

For some reason however the first tin cans were actually patented in the United States in 1825, and by 1839 tin cans were common in General Stores all over the continental US.

The Rise of Home Canning

US patent history records hundreds of successful fruit jar designs, but probably the most well known is the Mason jar. In 1858, John Landis Mason, a twenty six year old tin smith developed and patented a shoulder-seal jar with a zinc screw cap. The "Mason jar" had a threaded neck which fit with the threads in a metal cap to screw down to the shoulder of the jar and in this way form a seal. In 1869, a top seal above the threads and under a glass lid was introduced to the jar. The screw cap pressed tightly against the inverted lid, with rubber seal underneath, thus effecting an excellent seal. Preserving food in a glass home canning jar had now been taken a step further. A type of this closure still is in use today, although augmented with various other closure designs.

In 1861, Louis Pasteur used a microscope to show that microorganisms in un-sterilized food were responsible for food spoilage. Up until this time, even though people boiled the vessels in which they canned their food, nobody really knew why it worked. The common belief was that air caused spoilage and removing the air from vessels prevented spoilage. However, once Pasteur’s discovery was understood, scientists, manufacturers and home canners began developing better preservation methods usually by sterilizing the food as well as the container.

The manufacture of glass fruit jars for home canning accelerated after the US Civil War. Mason's patent expired in 1875 and many other companies began manufacturing fruit jars around that time. Many of these other glass manufacturers capitalized upon the familiarity of the Mason name (or brand) and used it liberally on their own product names and logos.

Fruit Sealer Jar Lids
A multitude of different closures were developed and used throughout the years, which included variations on the screw top lid as well as different designs of clamps, wire bails and wax devices to hold the lids in place. Dumpdiggers has kept a ‘Safety Seal’ brand jar of aromatic coffee beans above the stove for almost ten years – that vessel has a good hinge clamp closure device that sandwiches the lid and bottle together and locks in that delicious smell behind a rubber seal.

Why so many different colours?

While contemporary canning jars are made of clear glass, their ancestors are found in a variety of colors and shades: aqua, clear, amber, cobalt blue, green and occasionally even milk glass. Different colours appealed to different markets and shopkeepers would order exotic varieties based on the population’s economic affluence, the popularity of the brand, the growing season’s potential for a bumper crop, and the type of fruit in the region. Colors were used just like ‘fancy packaging’ is today. I suppose it’s similar to the great beer bottle debate we have today. Are beers packaged in clear bottles more susceptible to spoilage? Do amber coloured bottles better protect their contents from the adverse effects of sunlight? Some say it’s just a marketing gimmick.

When I emailed him and asked about this, Phil returned this pearl of wisdom, ‘…according to fruit jar researcher Dick Roller, these jars were made after the newly designed Frank O'Neill machines had been installed in the Kingsville (Ontario) plant in the spring of 1901. By September 28, 1901, it was reported that D.A. Gordon, of Sydenham Glass Co., had dismantled the Kingsville plant and taken the tools and machinery to Wallaceburg (where the Sydenham Glass Co. existed). The short span of time that the machines were used at the Kingsville plant may account for the rarity of these jars. So far, all of the left-facing Beaver jars checked have been machine-made..."

Fruit Jar Manufacterers
Dumpdiggers would be happy to find fruit sealers from any of these American (and Canadian) glass jar manufacturers. If you're a fruit jar collector, then this is your mission statement:

A Primer on Fruit Jars is an interesting article by Dave Hinson with a good overview on the history of glass fruit jars that have been used for home food preservation in the past.
Posted by rob at 2:22 PM

Here's a picture of a left facing Beaver jar:

It's actually a rarity among the rarities. Most of these jars are midgets in amber or clear. This is the only one I know of in this "yellow" shade. One other rarity in these jars is the quart which was fabled to not exist, but I saw and held one for the first time in my life this last weekend so they actually do exist.

I have a few Beaver canning jars in the quart size but I also have a pint size one with the beaver facing left.It is clear glass in good shape but the lid has been gold painted.
I have been trying to get an approximate value on it so I can sell it.
Could you give me a value?

I will send you a picture in a day or two.Where do I send it?Do you have an email address?

Did you get the picture I sent you of the left facing pint Beaver jar?
I sent it to this address norepiy-comment @blogger.com Is it the correct address?
If it is not then email me komonjohn@gmail.com