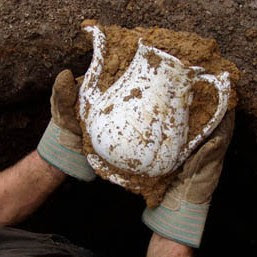 It’s not a miracle. Veteran dumpdiggers don't break much.

We find all manner of kitchenware in old dumps, including earthenware, stoneware, and porcelain. Among porcelain products, we rarely encounter soft paste, and more often find fine china and bone china. Many well appointed homes in the late 1800’s stocked at least one type of dishware, if not a combination of two or more of these categories. When pieces broke or went missing, wealthy families could afford to replace the entire collection, and discard the older material - even though it was perfectly functional. Some of the best pieces recovered in the Quest in Campbellford were the china plates from the Windsor Hotel on . Most diggers carry lots of water, and upon finding intact dishware they will power wash the bottom of the piece searching for maker’s marks. I will drench a dish in water first, and scratch and nibble away at debris stuck on the piece only very selectively – DO NOT WIPE YOUR THUMB ACROSS THE BOTTOM OF THE PIECE right after the relic has come up out of the ground. It needs time to breathe and get used to the different pressure / temperature zone. Some glazes will come right off on your fingers if you handle them; the heat and pressure of the dump might have loosened the finish.

Cleaning Fine
Antique bone china should be washed by hand; any ‘dump stains’ can probably be rubbed out with a damp cloth dipped in baking soda. 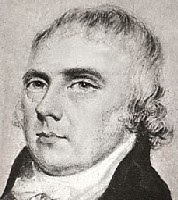 History of English Bone China
Fine Bone China was developed by Josiah Spode in Staffordshire in the 1770s. There were two men by this name – father and son. While Josiah Spode senior was carrying out his pioneering pottery in Stoke, his son, Josiah II was in marketing the company's products. They had a shop in Cripplegate in 1778, and a traveling salesman named William Copeland. The salesman had a great working knowledge of the market and he probably inspired old Mr. Spode to concentrate his experiments on making a new fine bone china.

After a century of importing Chinese porcelain at good profits, the East India Company reduced the trade in 1780s as demand was failing due to the rise of a Neo-Classical fashion movement with which Chinese decoration was decidedly not compatible. 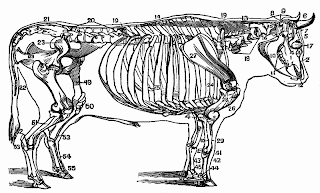 Josiah Spodes experimented with ox bone ash – which is the calcified remains of ox skeletons and that’s very medieval and creepy... Bone ash is the white, powdery ash left from the burning (calcination) of animal bones. It is very fine and is primarily composed of calcium phosphate. It is commonly used in fertilizers, polishing compounds, and in making bone china.

The use of bone ash had been known from the middle ages, when it was first used in cupels for the assaying of metals. Interest in bone ash as an ingredient in tableware pottery emerged thirty years earlier - the Bow Factory in had some success in soft paste porcelains. Their recipe was a carefully guarded trade secret and there is a good story about a man named Robert Browne who accepted a position at the factory only so he could hide in a barrel at the end of his shift to learn the components of ‘the batch’. 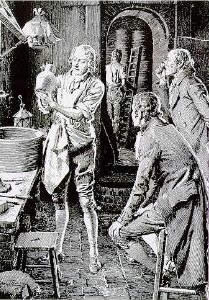 Today, fine bone china is a true porcelain of china clay and Cornish stone with 45%-50% calcined bone. Cornish Stone is crushed kaolinized granite and is therefore a mixture of minerals rather than a feldspar, which is a single mineral. Four grades of English cornish stone are marketed. The highest grades contain about 77 percent feldspar, 16 percent quartz, 7 percent kaolin and 0.5 percent fluorspar is sometimes present.

What’s kaolin? I wondered this too. Kaolin is a clay mineral more correctly known as kaolinite. It is also called china clay. Kaolin is made up of individual crystals that form units termed "booklets" of stacked sheets. Kaolin is a soft mineral, white in colour when it is fairly pure.

Kaolin's whiteness, opaqueness, large internal surface area and non-abrasiveness properties make it an ideal filler material for paper production. As a coating agent in paper, kaolin provides a smooth, opaque surface with good printability and ink retention. Eighty percent 80 per cent of all kaolin production is used in paper, other uses include fillers for rubber, plastic, paint and adhesives, as well as in ceramics such as porcelain and refractory products. 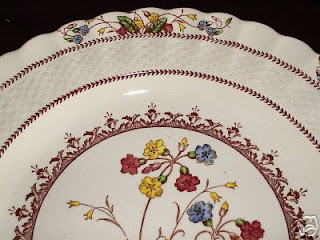 By 1796, Spode wrote a customer named William Tatton and invoice which contains the first known reference to 'English China'. By 1799, two years after his father's death, Josiah Spode II was successfully selling bone china, which he initially branded as 'Stoke ' in markets. Because it was such an obviously superior product, the rest of the industry was forced to follow – But yet Dumpdiggers cannot determine how everyone else came to know the recipe? Did Josiah Spode II willingly share his technological breakthrough? 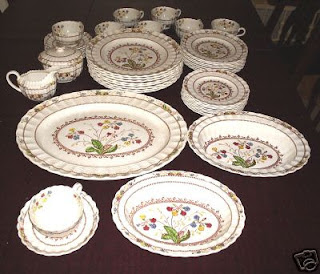 Here is a vintage Copeland Spode set in the Cowslip pattern for sale on eBay. This dish set was made in in the 1930s, and each piece features a distinctive brown stamp on its bottom. They set is numbered S713 and everything is in pristine condition. How much? The winning bid is $950.00 US

Marshall Gummer, The Appraiser, has these lovely pieces to admire on his website. 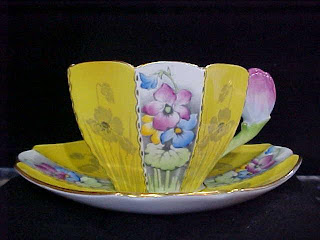 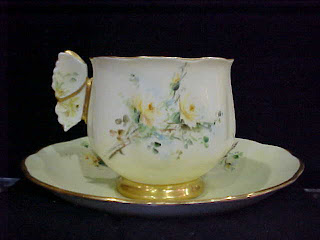 This is Katrocket from Rocketstudios. Just got your message today (it got caught in my spam filter), tried to reply but my message to you was blocked. You can reach me at katrocket@rogers.com if you still need to talk to me. (and yes, I'm in Toronto)

Thanks for the practical Dumpdigger advice - "DO NOT WIPE YOUR THUMB ACROSS THE BOTTOM OF THE PIECE right after the relic has come up out of the ground."

It's interesting post...Not many people explore about history especially like your posting...

I love your site. I'll be stopping by often.

Hi Rob - had a chance to read some more at your site today. You asked if we had any dumps in Powell River, BC. Yes, but they are scattered throughout the bush at old logging and residence sites. You might be interested in a recent post I made about some of my finds large and small. You can see them by clicking here. -- Margy

WOW! I have a whole collection of tea cups with flower handles and only one with a butterfly. I also have some teapots and cream/sugars. I knew they were rare but didn't know they could be quite valuable! One is an Ainsley.

HI,
Would you know where can I find China Clay in Toronto? Thanks in advance.