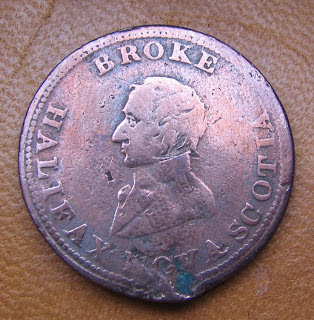 Dumpdiggers with metal detectors sometimes find small coins in strange places. This copper token was unearthed behind a church in Uxbridge Ontario.

Over 193 years old, this copper token precedes almost all other formal currencies in the Dominion of Canada. Indeed it was minted in response to a critical lack of species in the Atlantic region. It's interesting to note that this relic was not issued by a reigning monarch, or by the British Navy, but rather a consortium of enterprising merchants who hoped to increase commerce in the Port of Halifax. Dry goods importers, leather harness makers, clothiers and ironmongeries all had a vested interest in the local economy, and the largest of these enterprises may have combined forces to commission, distribute and honour the tokens. 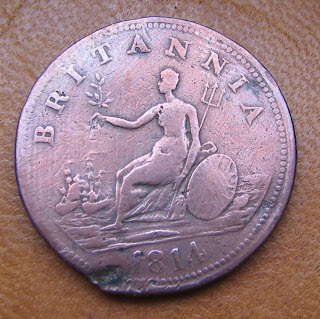 When the HMS Shannon sailed into Halifax harbour on June 6th 1813 with the 38 gun warship USS Chesapeake in tow, it was a proud moment for every sailor in the British Navy. History records that this American prize was sold in Halifax in 1814 to agents of the Royal Navy, and Captain Broke and his crew received handsome bonuses.

Broke copper tokens appeared later that summer at the behest of unknown merchants. The designers chose to remember proud Captain Broke on the front of the token, and used Britannia to remind every colonist of the might of the British Empire. Minted in Nova Scotia in 1814, the token had little value by 1820, and was completely worthless by 1825.

Well not completely worthless... Why do you think this token was found in a church yard? The reverend Minister himself no doubt cleaned the collection plate of all such tokens and copper halfpennies as he walked from the back door of the church toward his manor house. Broke tokens were especially worthless in Upper Canada, miles from their point of origin - their only value was to make a loud splash in the pie dish as it passed the pew. 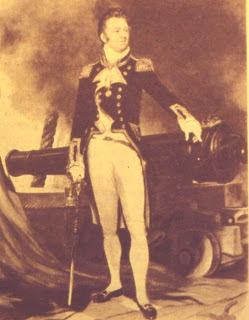 Sir Philip Bowes Vere Broke was born on at Broke Hall, Nacton, near . He enjoyed a privileged childhood as the eldest son of Philip Bowes Broke, a wealthy man from an old family with lots of good fertile land on the below the River Orwell. Born in the starch of the Napoleonic age, and raised in what would soon be considered fine Victorian tradition, all sons of Phillip Bowes Broke were enrolled in military careers and groomed for greatness at an early age.

Our man Philip chose the navy, and was placed in the in Portsmith Dockyard in 1788, at age twelve. In 1792 when Philip was sixteen, he ventured out aboard the HMS Southampton as a midshipman. This was the second ship with that name in the history of the British Navy; it seems this particular 32 gun frigate was launched in 1757 and would have been a slow leaky vessel in the year 1797 when Philip distinguished himself as a Third Lieutenant in the Battle of Cape St Vincent. The twenty two year old midshipman maintained order and ship’s discipline during the dogged actions of the day – and after superior officers boarded one French warship with a prize crew. Philip was commended for how efficiently he oversaw the repairs to the Southhampton, and how well he satisfied the many requirements of the ship’s surgeon. 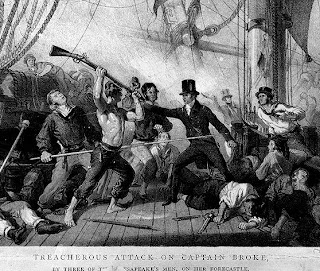 Philip Bowes Vere Broke was promoted to Commander in 1799, and became a Captain in 1801; but he didn’t get his own ship until 1806 - that was the year Broke took command of the HMS Shannon, a 38 gun frigate.

Six years later, Captain Broke was stationed in when war erupted between and the American. Broke sailed south and blockaded Boston, wherein he could see the larger USS Chesapeake. 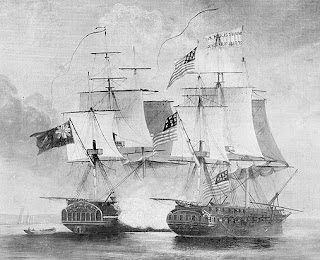 After issuing the captain of the American warship a formal challenge (which arrived too late), the two ships engaged in single combat. The result was spectacular - Captain Broke of the HMS Shannon captured the USS Chesapeake after less than twenty minutes of naval combat. The American frigate was struck by 362 shots, while the received only 258 hits. suffered early in the exchange of broadsides, having its wheel shot away. Without any maneuverability the more powerful American warship was helpless to resist Captain Broke's final assault.

It was a brilliant action - single ship combats are the stuff of legends. Bad news for Captain Broke however, he was seriously injured in the battle. He received a nasty head wound while commanding the boarding party in a head on assault of the Chesapeake's forecastle- some folks say he was never the same after the engagement. His career was set however and he sailed to prominence as a rear admiral without ever setting foot on ship again.

WHAT'S IT WORTH? In today's relatively healthy collectible coin market, a Broke 1814 halfpenny in absolute mint condition might fetch $25 bucks.