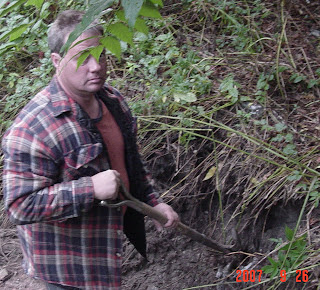 It was an ugly, damp, fog covered morning in on , but that's ideal weather for digging up old dumps.
Marked by Timbits as a ‘sure thing’, the day’s secret location was tucked away behind some factories on the east side of the city near . Tim had driven past the gully a few times earlier in the summer, and had wondered about its historic past; now he was sure it was an old dump.
I could see why. The prescribed dig zone was at the base of a small hill where a chain link fence had once kept animals and debris from emerging onto a busy road. The fence is gone, washed away, and the ever expanding washout now shows furnace ash peppered with glass and broken bits of pottery. 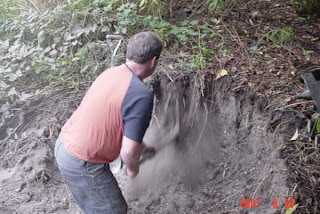 The grass on the surface of the site was littered with plastic water bottles and cursed with stinging nettles. These feisty weeds scratched my legs real bad before I donned my dirty pair of ‘dump pants’. Tim used his shovel to define the hole; together we would spend the day digging the 5x5 portal to early industrial .

Digging here was easy at first. The ash was like wheat flour and gave no resistance, but unfortunately, yielded no treasure. Only when Tim used a pick axe to expand the sides of hole, did anything interesting emerge... Tim recovered a small blue Bromo Seltzer and an unusual face cream jar. I found a medicinal vial that could have contained cosmetic oil or perhaps an exotic fragrance... or opium. All of this ‘crap’ was discarded to the right, and it was in that spot that our 'stash’ started to grow. 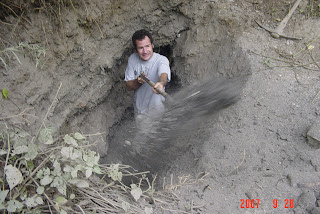 After crumbling the sides and digging straight down into the ash, we encountered a dark layer filled with charred metal. Underneath the heavy black strata the ash continued again, and below that, Tim spotted egg shells. This was a good sign.

White egg shells preserved in rust colored dust are all that’s left of century old kitchen trash. After Tim dredged up a clear Lydia Pinkham’s vegetable compound, he knew we were getting close to domestic refuse. 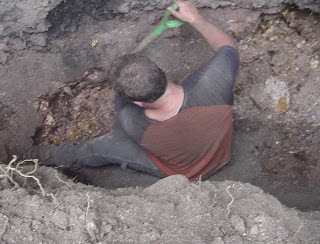 Minutes later, Tim’s shovel punctured a rich ‘goody vein’ filled with century old bottles – this was pay dirt at the bottom of the hole. One after another Timbits found three crown top soda pop bottles from approx 1910-15. In order, Tim found AMERICAN SODA COMPANY / ; JJ McLaughlin / ; Union Soda Manufacturing / . All these bottles are relatively common, but the thrill of finding them encouraged us to continue our ash mining operation.

When it was my turn in the hole, I went even deeper – right down into a maelstrom of burnt bricks and cobble stones. These yellow red cobblestones were hand carved and imported from in the late 1880s. Old English cobble stones are very valuable, ironically they’re probably worth more than all the bottles we had so far discovered… But who cares? Sure old cobble stones are highly prized by landscape decorators, sure they can sell for a thousand dollars a truck load, but who would dig all day for stones? 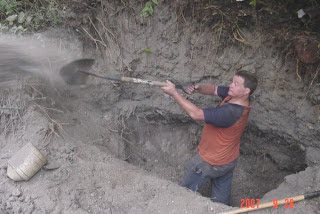 Tim pointed down into the hole. ‘What’s that beside your boot?’ I saw the top of an ink crock buried in the red ash clay - the fragile neck just inches away from my steel toed work boots.. Carefully I knelt down and excavated the relic – it was a four quart jug in absolute mint condition. Sadly, it contained no embossing.

When Tim got back down in the hole (getting in and out of the hole was becoming more and more of a problem) we started finding stuff again. Broken dishes gave way to broken milk bottles, and two came up intact. Fortunately, both were embossed. One very common milk bottle reads ACME DAIRY / and the other, more valuable vessel has twenty or so half inch panels all around the circumference and is embossed with the words OAKLAND DAIRY / JOHNSON BROS / COLL. 638. 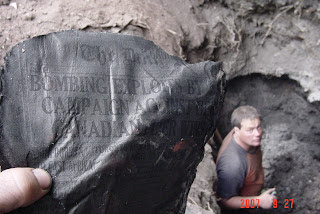 As we expanded the hole, we encountered more material in the carbonized layer – more evidence that the dump was burnt off early in its life and the buried garbage had reached high temperatures... The charcoal fossilized remains of wooden boxes, lamp shades and paper cups could easily be identified, but just one touch and these objects would crumble to dust. Tim stopped digging when he struck a block of burnt newspapers. These had been packed together and then perfectly incinerated. When I cracked the block open I could read the headlines (from the Globe and Empire) that was world news almost one hundred years ago. Have a look at – Allied bombing exploits make the front page. On the other side of the block were Christmas ads for fur coats, and ‘well chosen blouses and shoes’. None of these items cost more than twelve dollars. 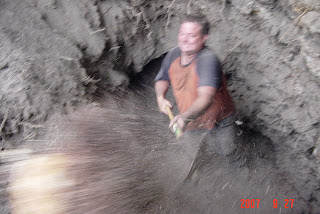 My favorite finds of the day must include the short square American drug bottle from the apothecary of Mary T Goldman / St. Paul Minn. and a near worthless Canadian drug bottle embossed NERVALINE / PREPARED BY THE CATARRBOZOHE CO / KINGSTON ONT which I like because its an old school Canadian patent medicine that succeeded in becoming world famous . In the future I’ll clean this bottle and write a piece on the history of the Catarrbozohe company.

At the end of the day, Timbits declared the entire stash to be worthless junk. He was disappointed that so much of the site was burnt. It's obvious that this gulch was a fire pit in 1915, and the tiny ribbon of household trash at the bottom of the crevice was just one or two family’s winter cleaning - it was just the old newspapers and bottles from one or two houses. Someone back there was taking Nervaline, and used Lydia Pinkham’s Vegetable Compound. Someone else enjoyed a variety of common soda pops, and another dumper tossed in a couple of milk bottles. Someone who lived around here in 1915 migrated from St Pauls Minneapolis. They brought their personal medicine. But it all ended up under a century of ’s ashes. 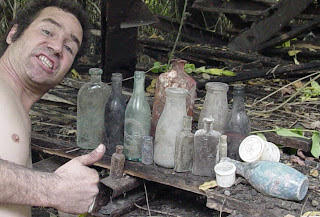 When we photographed the hoard Tim acted disappointed, but I was proud of our work– it was trip back in time with a bucket full of glorious keepsakes. Monetarily, these relics are almost worthless. The Johnson Bros milk bottle would probably be the only bottle worth taking home, and I'm sure Timbits wouldn’t bother... He raised no objection when I stuffed the piece in my duffel bag along with the others. To me every relic is a word or a sentence in the story of that particular place, one hundred years ago.